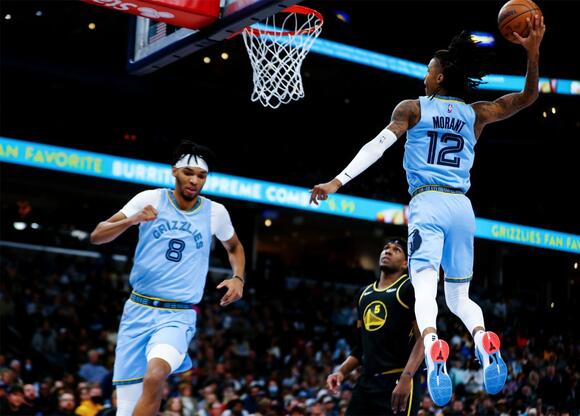 Welcome back to your Grizzlies Insider, where the season has begun and we deliver the latest NBA news and analysis straight to your inbox twice a week.

Ja Morant is getting closer to grabbing a starting spot in the All-Star Game next month in Cleveland.

In the latest round of fan voting released on Thursday, which accounts for 50% in determining the game’s starters, Morant maintains around a 700,000-vote advantage over Dallas Mavericks star Luka Doncic.

Fan voting for the game ends on Jan. 22, with the starters announced on Jan. 27. The media and players make up the other 50% in determining the game’s starters. The reserve players are selected by the league’s coaches.

Los Angeles Lakers star LeBron James leads all players in All-Star voting with 6,827,449 votes. Morant is second among the Western Conference guards with 2,623,359 votes, behind only Warriors guard Steph Curry.

Should he be selected, it would be the star point guard’s first All-Star appearance. That appears likely now.

Morant also wants teammate Desmond Bane to join him that weekend. Bane would be available to play in the Rising Stars game and participate in the 3-point contest.

More from your Insider:

As the Grizzlies pass their annual MLK Day marker, they’re closer to the West’s No. 1 seed (4.5 games back) than to the fifth seed (5 games up). And with apparent momentum for more.

Ja Morant and Jaren Jackson Jr. had monumental games, but ultimately the Bucks and Giannis Antetokounmpo were too much.

After a six-game absence, Jenkins is out of COVID protocols and will coach Wednesday night in Milwaukee.

The Grizzlies will be missing their shooting guard and key reserve as they embark on a four-game road trip.

Calkins: Did you see that, America? Why you don't want to mess with the Grizz

Steven Adams picked up one of the Chicago Bulls and carried him away like a small child. Just more evidence that this is not a Grizzlies team to be trifled with.

Ja Morant said that Monday will be a special occasion for the Grizzlies as they take on the Chicago Bulls in the 20th annual Martin Luther King Jr. Day Celebration Game.

Herrington: A franchise-best winning streak in the books, and by the numbers

Here are some key numbers and facts to remember from the historic run.

Jaren Jackson Jr. will be presented the award ahead of Friday’s game against the Mavericks.