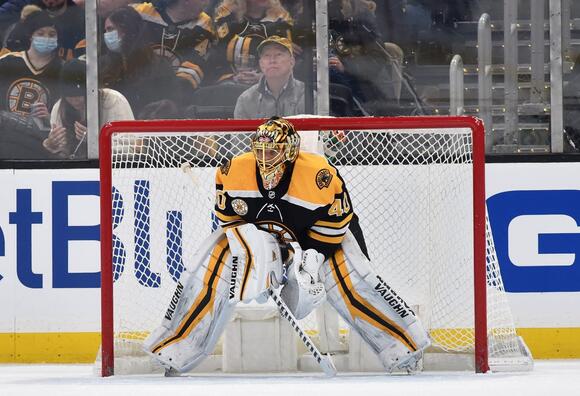 Tuukka Rask’s season debut for the Bruins last week was strong. He stopped 25 of 27 shots, including multiple breakaways, in a 3-2 win over the Flyers.

His second start did not go nearly as well. Rask gave up five goals on 12 shots before getting pulled after one period in the Bruins’ blowout loss to the Hurricanes on Tuesday.

While that disastrous period had far more to do with the team in front of him turning the puck over and leaving guys open in front of the net, it was still a reminder that there are going to be some bumps in the road as Rask works his way back up to full speed after missing so much time.

Making his weekly appearance on Gresh & Keefe on Thursday, NESN analyst and former Bruins goalie Andrew Raycroft broke down what he’s seen from Rask so far.

“Playing hockey for Tuukka, stopping pucks is very easy for him. The negative is he didn’t get an extra 40 minutes the other night,” Raycroft said. “There’s nothing in that that tells me he was horrible. There’s nothing in those 20 minutes to tell me, ‘Wow, he’s not ready to play at this level.’ He made a really good save about 12 seconds before the first goal went in, went to his left, stayed on this feet, drove into it. Really good save there. He made a breakaway save.

Mike Milbury also preached patience with Rask during his weekly appearance on The Greg Hill Show, suggesting that it could take as long as two months before Rask is fully back to being himself. The goal, he said, is just to make sure Rask is ready for the playoffs.

“There’s no set answer for that, but I’d say it’s gonna take six weeks, a couple months,” Milbury said. “He wasn’t out that long, and it wasn’t that serious of a surgery, so I think he should be able to get back pretty quickly. I’d say by playoff time, he should be ready to go and they’ll ride him.”

Listen to the full interviews with Raycroft and Milbury below:

With their season over after Saturday’s Game 7 loss to the Carolina Hurricanes, the Boston Bruins now face an offseason filled with potentially franchise-altering questions. At the top of the list: What does Patrice Bergeron decide to do?
BOSTON, MA・2 DAYS AGO
WEEI Sports Radio

Jake DeBrusk mum on trade request, but would be ‘OK’ with staying in Boston

During his “breakup day” media availability, Jake DeBrusk said he would have to take some time to think about whether he still wants to be traded, but added that he wouldn’t have signed an extension if he wasn’t “OK” with remaining a Boston Bruin.
BOSTON, MA・1 DAY AGO
WEEI Sports Radio

Boston Bruins players held their “breakup day” media availabilities on Monday. Here are some of the key takeaways, including an emotional David Pastrnak and an upcoming surgery for Matt Grzelcyk.
BOSTON, MA・17 HOURS AGO
WEEI Sports Radio

The Boston Celtics were dealt a double blow before Game 1 against the Miami Heat, as Marcus Smart (mid-foot sprain) and Al Horford (health and safety protocols) have both been ruled out.
BOSTON, MA・5 HOURS AGO

After falling behind in the first quarter, the Boston Celtics took care of the Milwaukee Bucks on Sunday, punching their ticket to the Eastern Conference Finals.
2 DAYS AGO
WEEI Sports Radio

The Boston Celtics and Milwaukee Bucks are slated to tee off in a Game 7 at TD Garden Sunday afternoon, with the C’s social media team helping its fans get ready in fine fashion.
BOSTON, MA・2 DAYS AGO