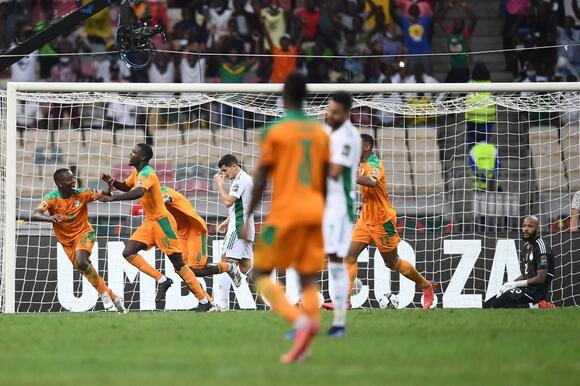 There will be a change in continental champion this year, after the holders Algeria suffered an embarrassing early exit from the Africa Cup of Nations .

Algeria went into their final group stage game needing a win but were unable to rouse themselves after poor performances earlier in the tournament, finding themselves three down before the hour mark.

It leaves the Desert Warriors bottom of Group E with just a single point, having failed to score against Sierra Leone in a goalless draw before being beaten by Equatorial Guinea.

Ivory Coast, meanwhile, established their place as one of the favourites heading into the knock-outs, finishing top with seven points.

Equatorial Guinea wrapped up second place with a 2-0 win over Sierra Leone, Pablo Ganet netting shortly before half-time. Sierra Leone were gifted an incredible chance to seal a draw which would prolong their stay in the tournament with a late penalty, but former Norwich and Middlesbrough forward Kei Kamara saw his spot-kick brilliantly saved in the 85th minute.

In the evening matches, Group F came to a close with Mali taking top spot thanks to a 2-0 win over Mauritania, Massadio Haidara and Ibrahima Kone netting the goals.

Gambia beat 10-man Tunisia 1-0 in the other fixture thanks to a last-minute Ablie Jabllow effort, though both sides progress to the knock-outs regardless.

Sudan and Sierra Leone are the third-placed sides who failed to reach the next stage, which will see the AFCON resume on Sunday 23 January.

AFCON Round of 16 fixtures

Fulham Football Club has won a High Court challenge against a judge’s ruling that it was liable for a youth player’s tackle on an opponent which allegedly led to the end of his professional career.The incident occurred in an under-18s game between Fulham and Swansea City Football Club at Motspur Park, south-west London, on December 10 2016.Towards the end of the first half of the match, Fulham midfielder Jayden Harris tackled Jordan Jones which resulted in the Swansea player suffering a serious injury to his right ankle.Mr Jones later brought a damages claim against Fulham, arguing that the tackle amounted...
SOCCER・4 HOURS AGO