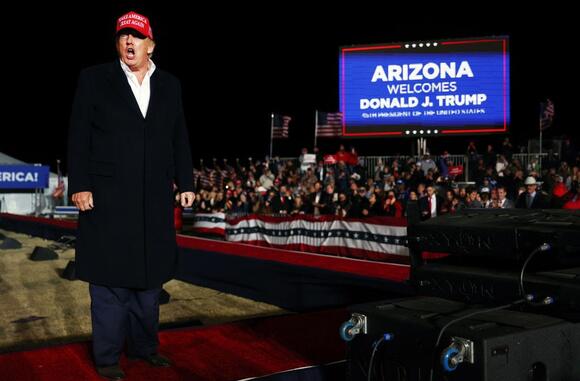 During a press conference Wednesday, President Joe Biden said five Republican senators have told him they are afraid to show him support for fear of being defeated in a primary. Biden seemed to attribute this to the influence of former President Donald Trump.

Trump has now clapped back, according to Fox News .

“The party loves me and I love the party,” Trump told the outlet.

Overall, 43 percent of the 1,161 people who responded to the poll from Jan. 13 to Jan. 18 said they approved of the job Biden has been doing in office over the past year.

“Still, Biden’s approval rating is better than his predecessor after about a year,” said the poll.

“Did you ever think that one man out of office could intimidate an entire party, where they are unwilling to take any vote contrary to what he thinks should be taken for fear of being defeated in a primary?” Biden asked rhetorically during the press conference Wednesday in an apparent reference to Trump. He would not tell reporters the identities of the five Republicans he indicated were afraid of losing primaries if they went against the former president.

“Former president Donald Trump continues to have an important influence on national politics despite being out of office for almost a year,” said columnist Henry Olsen of The Washington Post last month in an op-ed . “His effort to assert dominance and personal control over the Republican Party will be one of the most important political developments to watch as 2022 unfolds.”

As of this month, Democrats hold a slight majority in both the House of Representatives and the Senate. Republicans are aiming to take control of Congress during this year’s midterm elections, and in November, CNN reported that Trump had “taken his involvement in 2022 Republican primaries to a new level as he works to permanently mold the GOP in his image.”

This effort included public efforts to oust Republican incumbents Trump considered disloyal, according to the outlet.

A lack of any support from Republicans in Congress as well as lack of support from Democrat Sen. Joe Manchin of West Virginia has already stalled the large “Build Back Better” spending plan proposed by the Biden administration. Biden indicated that Republicans refuse to vote for it mostly to make sure that he isn’t a success and due to allegiance with Trump.

While Trump has not officially announced whether he is going to run for president in 2024, he told Fox News Wednesday he is “going to make a lot of people happy” with his decision regarding the election.

Trump also said he was happy to hear that Biden confirmed Vice President Kamala Harris would be his running mate again in 2024.

Stacey Abrams' Chances of Beating Brian Kemp in Georgia, According to Polls

The Democratic gubernatorial candidate and the Republican governor will face off in a rematch. Abrams narrowly lost to Kemp in 2018.
GEORGIA STATE・3 DAYS AGO
Daily Beast

Sen. Ted Cruz (R-TX) abruptly walked off from a British journalist’s questions about gun violence in America two days after an elementary school massacre in his state left 19 children and two adults dead. Cruz, who is due to appear at a National Rifle Association convention this weekend, became...
CONGRESS & COURTS・1 DAY AGO
Business Insider

"We could overhear his father graciously complimenting his Democratic opponent," Conway wrote in her newly-released memoir about the 2016 election.
PRESIDENTIAL ELECTION・2 DAYS AGO
Fox News

On Thursday, the former president said he would have shunned his former campaign manager had he known that "she thought we lost the election."
PRESIDENTIAL ELECTION・1 DAY AGO
Newsweek

The Russian official read out an appeal to the president demanding the immediate withdrawal of troops from the territory of Ukraine.
POLITICS・1 DAY AGO
Newsweek

Herschel Walker's Chances of Beating Raphael Warnock, According to Polls

The Trump-backed Republican appears to be polling narrowly ahead of the Democratic Senator Raphael Warnock in Georgia.
GEORGIA STATE・2 DAYS AGO
TheDailyBeast

Far-right favorite Kandiss Taylor received just 3.4 percent of the vote in Georgia’s GOP primary for governor on Tuesday, less than one-twentieth of current Gov. Brian Kemp’s 73.7 percent of the vote. But that isn’t stopping Taylor from refusing to concede and claiming the election was “rigged.”
GEORGIA STATE・19 HOURS AGO

US teaches Ukraine soldiers to use major weapons

As Ukraine continues endeavoring to beat back the invasion from neighboring Russia, it was announced that the U.S. is no longer only supporting Ukraine with money and shipments of weapons and necessities.
MILITARY・18 HOURS AGO