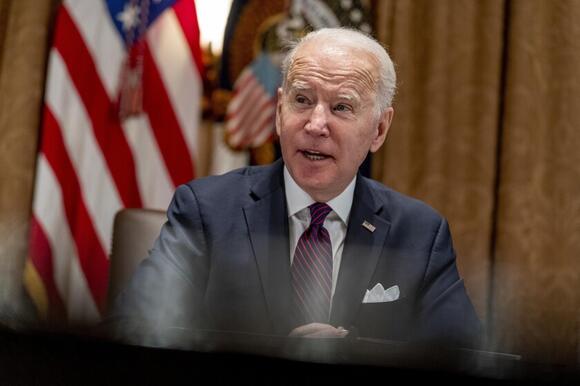 President Joe Biden is paying a steep price for high inflation — a problem that festered during his first year in office instead of fading away as he suggested it would.

His $1.9 trillion coronavirus relief package, enacted in March, drove what will probably be the fastest economic growth since 1984 and pulled the unemployment rate down to 3.9% at a quicker pace than experts predicted.

But after unprecedented government interventions and supply chain problems , inflation is running at a nearly 40-year high of 7%. And that has soured Americans' feelings about the president. It's left Biden trying to retrofit a policy agenda about winning the future into one that can fix inflation, a problem that did not exist when he took office.

The mix of a strong economy and high inflation has created a paradox for his presidency: Most U.S. households feel confident about their own finances, yet they’re worried about the state of the national economy in ways that have been a drag on Biden’s popularity.

“We need to get inflation under control,” Biden acknowledged at a news conference Wednesday wrapping up his first year. He allowed that “it's going to be painful for a lot of people in the meantime.”

There is a clear contradiction in people believing that they're doing well but that the economy is doing poorly. White House officials are now trying to reconcile this paradox, as Biden's future may depend on making people feel good about not just their bank accounts but also the broader economy.

Metrics like Langer Associates' Consumer Comfort Index encapsulate the problem. It shows a worsening gap between people's optimism about their own situations and their pessimism about the national economy and the climate for buying goods.

A December poll from the AP-NORC Center for Public Affairs Research found that just 35% of Americans described the national economy as good, down from 45% in September. The percentage calling their personal financial situation good — 64% — has barely budged in AP-NORC polling since before the pandemic.

And an AP-NORC poll this month found that a mere 37% of Americans approve of Biden's economic leadership, a sign that they're blaming him for overall economic conditions and not crediting him for their personal circumstances.

The White House view is that families recognize their own economic circumstances have improved, but there’s this sense that everything else in society is not working. They point to the decrease in institutional trust and political polarization as a possible explanation for this trend.

Republicans have used inflation to hammer Biden, while West Virginia Sen. Joe Manchin, a Democrat in a GOP state, has refused to back the president's $2 trillion tax and social programs agenda because of inflation concerns, leaving the president trying to pass a scaled-down version.

The Federal Reserve expects that inflation rates will fall in the second half of this year as it raises interest rates, though inflation would still be above the Fed's 2% annual target. The White House is pinning its hopes on the idea that the direction of inflation tends to matter more to voters when prices are elevated, which suggests that Biden could benefit if prices stabilize and people put a greater emphasis on their own wellbeing.

The administration has noted that inflation is a global problem, though it also speaks to the blowback from an unprecedented amount of government aid to the U.S. economy. Prominent economists such as Larry Summers, a former U.S. treasury secretary, and Olivier Blanchard, former chief economist at the International Monetary Fund, warned early on that the coronavirus relief package was so large that it would fuel higher inflation. And Summers said inflation could make it harder for Biden to achieve the rest of his agenda, a prediction that anticipated his recent legislative struggles.

The administration responded at the time that it was not dismissive of inflation, but was balancing the risks of higher inflation against a slow economic recovery from the pandemic.

“We’ve constantly argued that the risks of doing too little are far greater than the risk of going big, providing families and businesses with the relief they need to finally put this virus behind us,” Jared Bernstein, a White House economist, said at a February 2021 briefing. “This is risk management.”

Shortly after the relief package became law, a Chicago Fed analysis in April suggested that inflation could run high if there were “resource pressures" — a statement that became prophetic as ships waited to dock, overseas factories shut because of the pandemic and demand outstripped the world's ability to supply goods.

The president signed an executive order on Feb. 24 to bolster supply chains, but it was aimed at implementing a longer term series of repairs rather than addressing immediate needs. Biden didn't mention inflation in his remarks. Prices at the time were increasing at an annual rate of just 1.7%. Yet Biden referred to an old story about how a single break in the supply chain could bring down an entire country.

“Remember that old proverb: ‘For want of a nail, the shoe was lost. For want of a shoe, the horse was lost,’” he said. “And it goes on and on until the kingdom was lost, all for the want of a horseshoe nail. Even small failures at one point in the supply chain can cause outside impacts further up the chain.”

That scenario unfolded in the months after Biden signed his March relief package.

The computer chip shortage was already hurting the auto sector. But shortages emerged for household appliances, furniture, towels, clothing and a whole range of basic goods. Products that once shipped in hours took weeks or months to arrive.

Inflation wasn't bad enough to lose a kingdom, just to undermine public trust in Biden at the precise moment when other data showed that his relief package had succeeded at bringing back jobs.

Yet Biden called the inflation fleeting, saying the bottlenecks and high prices would vanish as the economy regained its footing after being shut down because of the pandemic.

“These disruptions are temporary,” Biden said in a July 19 speech. The spikes in prices for autos, lumber, airline tickets and other items were the result of “transitory effects” that accounted for the bulk of inflation, he explained.

Annual inflation was at 5.4% by then. And the figure got worse toward the end of the year as oil prices rose and the impact of higher housing costs began to filter into inflation. The administration brokered an agreement for the Port of Los Angeles to operate all hours of all days of the week to relieve shipping congestion. It launched initiatives to increase the number of truckers and worked with retail CEOs to ensure Christmas gifts arrived.

Summers, the original inflation Cassandra of the Biden era, rejected supply chain bottlenecks as the primary driver of inflation.

He told the American Economics Association this month that Fed policy is too loose and the labor market is historically tight, a sign that Biden might be the victim of his own success in bringing jobs back as quickly as he did.

“We are running the economy in an unsustainable way,” Summers said.

EDITOR'S NOTE — Josh Boak covers the White House and has written about the U.S. economy for AP since 2013.

The average gallon of gas in the US hit a record high of $4.59 on Tuesday, about 51% higher than a year ago.
TRAFFIC・1 DAY AGO
Daily Beast

Sen. Ted Cruz (R-TX) abruptly walked off from a British journalist’s questions about gun violence in America two days after an elementary school massacre in his state left 19 children and two adults dead. Cruz, who is due to appear at a National Rifle Association convention this weekend, became...
CONGRESS & COURTS・1 DAY AGO
Newsweek

On Thursday, the former president said he would have shunned his former campaign manager had he known that "she thought we lost the election."
PRESIDENTIAL ELECTION・1 DAY AGO
Fox News

China’s latest aggressive military activities near Taiwan have many observers speculating if, or when, Beijing will invade the island democracy. If China does end up moving against the island, the process started last weekend, when Beijing made yet another assertive messaging effort and Washington did the exact opposite. When...
POLITICS・1 DAY AGO
Business Insider

"We could overhear his father graciously complimenting his Democratic opponent," Conway wrote in her newly-released memoir about the 2016 election.
PRESIDENTIAL ELECTION・2 DAYS AGO
Business Insider

Great Resignation regret is sweeping the nation as workers who quit for more money quit again: 'It sucks to be miserable'

For a year now, Americans have been quitting for higher pay and flexibility — it might work, but liking your job is also a big deal.
RETAIL・3 DAYS AGO
GOBankingRates

The average monthly payment for Social Security retirement benefits is $1,613.77. That's not enough to get by in most places in America, but Social Security was never meant to serve as a retiree's...
ECONOMY・30 MINUTES AGO

We live in a partisan age, and our news habits can reinforce our own perspectives. Consider this an effort to broaden our collective outlook with essays beyond the range of our typical selections. FROM THE LEFT. From “Abolishing Birth Control and Gay Marriage Is on the Table,” by Matt Ford...
U.S. POLITICS・26 MINUTES AGO