International flight turns around after passenger refuses to wear mask 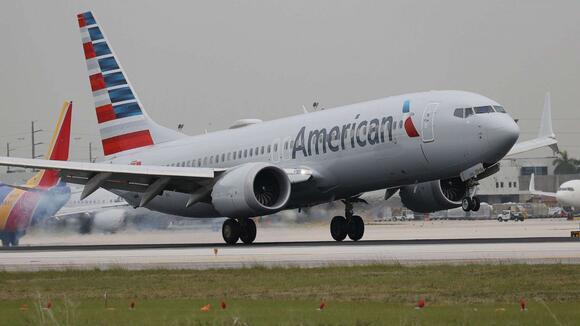 A first-class passenger who allegedly refused to wear a mask disrupted a London-bound American Airlines flight Wednesday night and prompted the pilot to turn back to Miami so the customer could be booted off the aircraft , police and airline officials said.

American Airlines Flight 38, with 129 passengers and 14 crew members aboard, was over the Atlantic Ocean when the passenger allegedly refused to obey instructions to wear a mask and became disruptive, a spokesperson for the airline said.

The flight departed Miami International Airport at about 7:40 p.m. local time. About an hour into the flight, the pilot decided to turn the Boeing 777 aircraft around and head back to Miami, according to the airline.

The flight was ultimately canceled and the passengers needed to rebook on future flights, the airline's spokesperson said.

"The flight landed safely at MIA where local law enforcement met the aircraft. We thank our crew for their professionalism and apologize to our customers for the inconvenience," American Airlines said in a statement.

Steve Freeman, a passenger on the flight, told ABC Miami affiliate WPLG the woman was verbally abusive to the flight crew.

"She sat behind us in first class -- she was a first-class passenger and was extremely abusive to the stewards," said Freeman, who was flying home to London. "I could see the writing on the wall -- they gave her a lot of warnings, so we were kind of ready for it."

"She complained about each mask," Freeman said.

Det. Argemis Colome of the Miami-Dade Police Department told ABC News on Thursday that police were contacted by American Airlines about a disruptive female passenger refusing to wear a mask.

MORE: Southwest employee hospitalized after being punched by passenger: Police

Colome said police officers met the plane when it returned to the Miami International Airport. He said officers escorted the passenger off the plane, but she was not arrested or charged.

Colome said the woman, whose name was not released, was turned over to American Airlines officials to handle administratively.

MORE: FAA refers 37 of the 'most egregious' unruly passenger cases to FBI for criminal review

A spokesperson for American Airlines told ABC News on Thursday that the woman has been placed on the airline's internal no-fly list pending an investigation. Such incidents are referred to the Federal Aviation Administration as part of a standard reporting process, the spokesperson said.

it's the right of the airline, a commercial business, to enforce any rules them deem fit. why don't people get this? Just like the no shirt/no shoes/no service policy. A business or store is privately owned. it's not your right to demand anything.

Every person on that flight she inconvenienced with her ignorance should have the right to expect her to compensate them. I am surprised no one tried to kick her behind.

She was informed when she bought the ticket that she had to wear one. What does she feel the rules are for every one but her? Another entitlement person? So sing of those kind of people. You don't want to wear a mask don't fly. A 5 yr old could if gotten that rule.

A first-class passenger on an Arizona-bound Delta Airlines plane was arrested for allegedly using homophobic slurs against a flight attendant and physically assaulting the crew member for not serving him a drink.Christopher Alexander Morgan allegedly threw a glass of ice and an onboard telephone at the flight attendant for refusing to continue serving alcohol to him.Mr Morgan was arrested when flight 2908 touched down at the Phoenix Sky Harbor International Airport on 22 April and is facing charges of interference with flight crew members, which can be punishable with up to 20 years in prison.The passenger called the flight...
PUBLIC SAFETY・24 DAYS AGO
Newsweek

Bodycam footage captured the snake slithering around the room as an officer attempted to capture it.
BOYNTON BEACH, FL・24 DAYS AGO
Newsweek

The poster offered a solution for what someone should do should they see someone in the restroom they don't think matches the sign on the door.
RELIGION・24 DAYS AGO