US says nuclear talks with Iran at ‘decisive moment’ 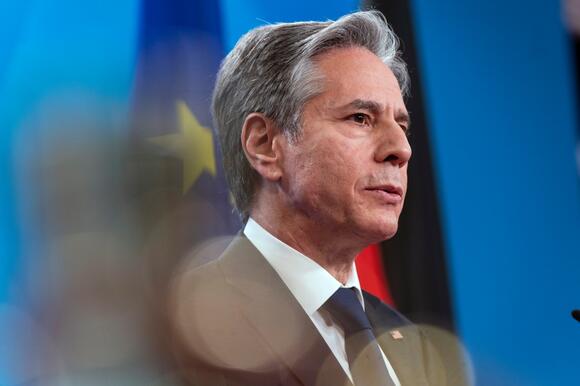 BERLIN (AP) — U.S. Secretary of State Antony Blinken said Thursday that talks with Iran over its nuclear program are at a “decisive moment,” and warned that Washington and its allies may change tactics if a deal isn’t reached in the coming weeks.

Blinken said that the longer Iran fails to comply with the 2015 Vienna accord — intended to rein in Tehran’s nuclear program — the closer it would get to being able to build an atomic weapon.

“We are indeed at a decisive moment,” Blinken told reporters in Berlin after meeting senior diplomats from Germany, France and Britain. He added that he believed modest progress had been made during the ongoing round of talks in the Austrian capital.

“But we are not where we need to be. And if we don’t get there very soon, we will have to take a different course,” he said.

The U.S. withdrew from the Vienna accord under President Donald Trump and reinstated economics sanctions on Tehran. Iran responded by increasing the purity of uranium it enriches and its stockpiles, in breach of the accord.

President Joe Biden has signaled that he wants to rejoin the deal.

US: Swift, severe response if Russia sends troops to Ukraine

German Foreign Minister Annalena Baerbock, whose country remains part of the accord known as the Joint Comprehensive Plan of Action along with France, Britain, China and Russia, echoed Blinken’s words.

“Our objective is to maintain and to preserve the agreement and above all, to make Iran see sense and to ensure that Iran can no further increase its enrichment capacity,” she said.

Baerbock indicated that European nations had sought to ensure China and Russia also maintain pressure on Tehran. Both countries have in recent days spoken of new trade and economic cooperation agreements with Iran, which some fear could undermine efforts to get Tehran to make concessions at the Vienna talks.

“It’s been almost two months since the negotiations resumed in Vienna,” he said in a statement. He acknowledged that some progress has been made, but that “negotiations cannot continue at such a slow pace while in parallel the Iranian nuclear program is advancing so quickly.”

“We will very quickly find ourselves in an untenable situation,” Le Drian said.

Mother passed out at Sheetz with infant faces charges

ALTOONA, Pa. (WTAJ) — An Altoona woman was jailed after she was found passed out in her car at Sheetz with her child in the backseat, according to Altoona police. Rose Markle, 28, is facing charges after police were called to Sheetz on Chestnut Avenue in Altoona on May 18 around 1 p.m. to find […]
ALTOONA, PA・3 DAYS AGO
WTAJ

BLAIR COUNTY, Pa. (WTAJ) — Two people from Altoona are behind bars after parole officers found drugs in a home, noting that one of them had been convicted 11 other times since 2007 for dealing. On Wednesday, May 18, parole officers found suspected THC wax, a scale, 59 grams of suspected methamphetamine and a stun […]
ALTOONA, PA・3 DAYS AGO
WTAJ

Johnstown mother charged with homicide in death of toddler

CAMBRIA COUNTY, Pa. (WTAJ) — A woman was charged with general criminal homicide following an investigation into the death of 14-month-old Gianna Rice-Lewis in April. On Thursday, charges were filed against Veronica L. Lewis, 38, whose child died in the ER from massive blood loss caused by blunt force trauma abuse. She also faces felony […]
JOHNSTOWN, PA・3 DAYS AGO
Business Insider

Approximately 15,000 Russian troops died in the invasion of Ukraine, per UK's Defense secretary.
MILITARY・27 DAYS AGO

Fox News host Lisa Kennedy said on Monday that U.S. lawmakers "should not have the government involved in education at all," suggesting that America should rid itself of the public school system entirely. Kennedy's remarks came during Monday's segment of "Outnumbered" in which Kennedy was facilitating a discussion around the...
CONGRESS & COURTS・26 DAYS AGO
Business Insider

Greene testified on Friday that she didn't recall whether she asked Trump to invoke military rule, despite telling Meadows to relay the idea to Trump.
ATLANTA, GA・27 DAYS AGO
Business Insider

International order will be thrown out the window if Russia is able to escape consequences over its invasion of Ukraine, US Gen. Mark Milley told CNN.
POLITICS・26 DAYS AGO
NBC News

MEXICO CITY — Mexican President Andrés Manuel López Obrador on Monday urged U.S. Latinos not to vote in November’s midterm elections for politicians who have “mistreated” them, in response to a comment by former U.S. President Donald Trump. Trump boasted at a rally in...
PRESIDENTIAL ELECTION・26 DAYS AGO

Blackout and crisis preparedness expert Herbert Saurugg has recently warned against the complete power grid blackout that could plunge entire Europe into darkness. He predicts a widespread blackout could be lurking in the not too distant future and such an event can cause extremely chaotic conditions worldwide. However, those who are prepared for an emergency can definitely bridge the difficult days well.
ENERGY INDUSTRY・27 DAYS AGO
Business Insider

Viktor Yushchenko says Putin has become a "completely isolated and brutal despot who cannot stand any opposition."
POLITICS・28 DAYS AGO

The intelligence the U.S. shared with Ukraine helped it continue to resist Russian invading forces and even shoot down a transport plane carrying hundreds of Russian troops, a new report revealed. According to current and former U.S. officials who spoke with NBC News on Tuesday, the U.S. provided critical intelligence...
MILITARY・26 DAYS AGO
Newsweek

The former president referenced scoring well on a cognitive test in 2018, which is designed to detect whether a person has early stages of dementia.
DELAWARE COUNTY, OH・28 DAYS AGO
Business Insider

The former F-35 test pilot Billie Flynn told The Aviationist that moving to the "cosmic spaceship" that is the F-35 was too much to ask of MiG pilots.
AEROSPACE & DEFENSE・27 DAYS AGO
Fox News

A superyacht worker claims the vessel’s captain once had to deploy sonic weapons against Kalashnikov-wielding pirates on inflatable boats in the Arabian Sea. The episode was one of many surreal scenes an anonymous worker detailed in a piece published Sunday in The Times of London. The captain, according to...
PUBLIC SAFETY・27 DAYS AGO
Salon

Rep. Marjorie Taylor Greene (R-GA) speaks to supporters of former U.S. President Donald Trump at the Banks County Dragway on March 26, 2022 in Commerce, Georgia. This event is a part of Trump's Save America Tour around the United States. (Megan Varner/Getty Images) On Monday, CNN's Andrew Kaczynski and Em...
COMMERCE, GA・26 DAYS AGO