Leonard Fournette Returns to Buccaneers Practice, Status in Doubt for Divisional Round 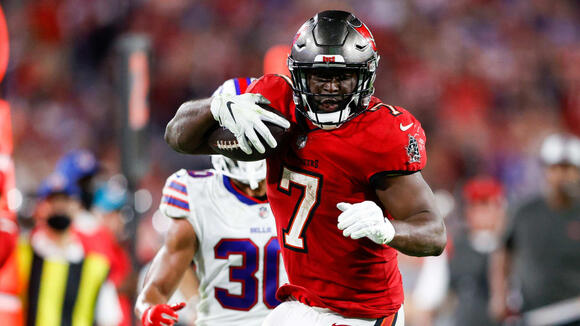 Will one of Tom Brady's top weapons return for the divisional round?

Tampa Bay running back Leonard Fournette returned to practice Thursday as he looks to return to the team for a divisional-round matchup against the Rams.

Fournette is currently on injured reserve as he deals with a hamstring injury. He hopes to be activated from IR before Sunday, though his status for the game is in question.

The Buccaneers are dealing with a number of injuries and absences ahead of the divisional round. All-Pro right tackle Tristan Wirfs did not practice Thursday due to a sprained ankle, while regular-season targets Antonio Brown and Chris Godwin are not on Tampa Bay’s playoff roster. Brown was released after his mid-game exit against the Jets, while Godwin is out for the year with an ACL injury .

Fournette, 27, is in his fifth NFL season and his second with Tampa Bay. He has tallied 3,810 rushing yards and 31 rushing touchdowns in 63 career games and ran for three touchdowns in last year's postseason.

The Buccaneers are seeking their second straight Super Bowl with Tom Brady under center. Kickoff on Sunday is slated for 3 p.m. ET.

• Fits for Giants’, Raiders’, Bears’ and Broncos’ Jobs
• Ranking the NFL’s Eight Head Coaching Vacancies
• Cooper Kupp, Rams Avoid a Close Shave by Rolling Into Divisional Round
• All Bucs: Which Remaining NFC Team Poses the Biggest Threat to the Bucs?

For more Tampa Bay Buccaneers coverage, check out All Bucs .

The five teams with the hardest schedules in the 2022 season are from the same two divisions.
KANSAS CITY, MO・1 DAY AGO
Sports Illustrated

The four-time MVP didn’t join the Packers for voluntary OTAs to start the week.
GREEN BAY, WI・20 HOURS AGO

But how will change at QB affect Pittsburgh’s pass catchers?
PITTSBURGH, PA・1 DAY AGO
Sports Illustrated

This old dog will teach the Colts offense new tricks.
INDIANAPOLIS, IN・1 HOUR AGO
Sports Illustrated

The addition of Matt Ryan pushes the Colts to the forefront as AFC South contenders.
INDIANAPOLIS, IN・1 HOUR AGO

NFL owners are reluctant to set a precedent for removing one of their own, but they could be moved to do so pending an ongoing investigation. Plus, insight on Kyler Murray and Aaron Donald skipping OTAs, the Colts’ decision to sign Nick Foles and more.
INDIANAPOLIS, IN・1 DAY AGO
Sports Illustrated

The consensus No. 1 fantasy pick could produce a legacy-building 2022 season.
INDIANAPOLIS, IN・1 HOUR AGO
Sports Illustrated

Dallas has now been fined three separate times for breaking this rule.
DALLAS, TX・2 DAYS AGO

The 41-year-old has ultimately decided to stay on the sidelines.
NFL・2 DAYS AGO
Sports Illustrated

The third-year receiver could leap up further into elite WR tiers.
NFL・1 HOUR AGO
Sports Illustrated

He left NBC Sports to join Amazon this offseason but will return in a different role.
NFL・19 HOURS AGO
Sports Illustrated

These 10 players could reach an elite fantasy level.in 2022.
NFL・2 HOURS AGO
Sports Illustrated

Tannehill ‘Disappointed‘ by How Mentorship Remarks Were Taken

The veteran QB said his previous comments were blown out of proportion.
NFL・19 HOURS AGO
Sports Illustrated

The league is considering an overhaul of the event, which is typically held the week before the Super Bowl.
NFL・20 HOURS AGO