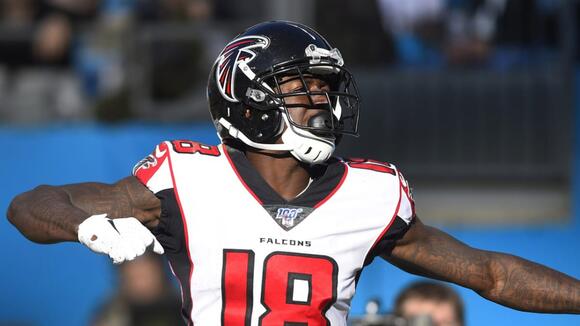 A bidding war for him by AFC teams like the Patriots, Jets and Dolphins? That can help bump up the return on a trade. But …

The Atlanta Falcons have wide receiver questions for 2022. But ironically, it’s the Atlanta wideout who doesn’t seem to want to be here - Calvin Ridley - who might provide Atlanta’s answer.

To be determined first: Where is Ridley on his mental health journey?

To be determined after that: What is his value?

Atlanta is presently poised to have only a couple of kid receivers under contract for 2022. They can chase free agents. (A top-five idea list here .) So there are going to be changes in coach Arthur Smith’s receivers room. A clean solution would be for Ridley, 27, to reverse course and remain here. But the buzz about his departure seems to loud for that.

Amid a great deal of speculation - is a third-round really all that can be netted in trade for Pro Bowl receiver in his prime? - comes an ESPN report that takes us in another direction.

Jeremy Fowler has reported that m the “market would be robust” for Ridley once he’s available in a trade.

Fowler further states that if he is back in an NFL lineup next season, multiple teams view Ridley as a top-10 wideout.

And what is the playoff for a top-10 player at his position and in his prime?

“One league exec says a conditional second-round pick - which could turn into a first-rounder based on playing time - seems like a sweet spot for Ridley,” Fowler said.

The first-round pick would be a bonanza for the Falcons; we can smartly assume that is not their present demand.

A bidding war for him by AFC teams like the Patriots , Jets and Dolphins? That can help bump up the return on a trade. But …

A first-round pick in trade for Calvin Ridley? Color us “skeptical” as we watch GM Terry Fontenot attempt to morph a Ridley question into an Atlanta answer.

These dates definitely need to be circled.
ATLANTA, GA・2 DAYS AGO
Falcon Report

Sheffield will head back to his hometown of Houston via the waiver wire
HOUSTON, TX・5 HOURS AGO

A grand jury indicted former Georgia linebacker Adam Anderson on Tuesday and charged him with rape. Anderson will be arraigned
NFL・20 DAYS AGO
Yardbarker

Ball had surgery in January to repair a torn meniscus in his left knee. After surgery, the expected recovery time had the point guard returning to the court within six to eight weeks. However, the 24-year-old has faced multiple setbacks during his rehab. Most recently, Ball said his recovery was "at a standstill," and the possibility of another surgery during the offseason is not out off the table.
CHICAGO, IL・8 MINUTES AGO