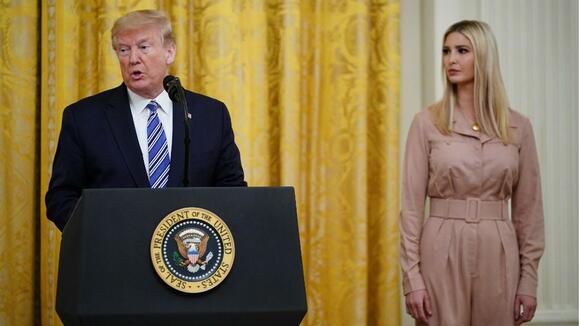 The House committee investigating the Jan. 6, 2021, attack on the Capitol is asking Ivanka Trump , former President Trump 's daughter and one of his White House advisers, to voluntarily sit down with the committee.

The request — the first official outreach to a member of the Trump family — notes that Ivanka Trump spent considerable time with her father in the days leading up to Jan. 6, including witnessing a conversation between him and Vice President Mike Pence ahead of Congress's certification of the 2020 presidential election.

“The Select Committee wishes to discuss the part of the conversation you observed between President Trump and Vice President Mike Pence on the morning of January 6th. Similarly, the Select Committee would like to discuss any other conversations you may have witnessed or participated in regarding the president’s plan to obstruct or impede the counting of electoral votes,” the committee wrote in the letter to Trump.

The president’s elder daughter was one of the officials with the greatest access to the president at the time, likely leaving her with wide-ranging knowledge of the activities in the White House surrounding Jan. 6.

If Ivanka Trump chooses to cooperate, her testimony could be damaging for her father, with the committee concluding its letter with instruction from Trump White House counsel Don McGahn to preserve records like text messages.

The eight-page letter largely asks the younger Trump to reconstruct her activities on the day of the riot and provide insight into actions taken — or not taken — by the White House that day.

It also reveals information the committee has gleaned from other interviews with former White House officials as well as phone records, laying out new text messages from Fox News host Sean Hannity .

The committee said it has information suggesting the White House counsel “may have concluded that the actions President Trump directed Vice President Pence to take would violate the Constitution or would be otherwise illegal.”

The panel said it wants to know whether any such conclusions were shared with the elder Trump, Pence or then-White House chief of staff Mark Meadows .

The White House was aware of the growing violence at the Capitol following the president’s speech, the committee said. It cited portions of its conversations with Keith Kellogg, Pence’s national security adviser, who portrayed Ivanka Trump as one of the few at the White House who might be able to convince her father to quell the violence.

“Testimony obtained by the Select Committee indicates that members of the White House staff requested your assistance on multiple occasions to intervene in an attempt to persuade President Trump to address the ongoing lawlessness and violence on Capitol Hill,” the committee wrote.

The panel noted that Donald Trump in his speech earlier that day said he hoped Pence did "the right thing" while tweeting in part at 2:24 p.m. that Pence "didn't have the courage to do what should have been done to protect our Country and our Constitution." The panel asked Ivanka Trump about discussions "before and after" that tweet.

“We are particularly interested in this question: Why didn't the White House staff simply ask the president to walk to the briefing room and appear on live television to ask the crowd to leave the Capitol?" the panel wrote.

The request to Ivanka Trump comes after the committee reportedly subpoenaed and successfully obtained the phone records of Eric Trump , as well as Kimberly Guilfoyle , Donald Trump Jr.'s fiancée.

The committee released only partial excerpts of their conversation, including two of what they describe as a five-point plan.

“2- Yes, impeachment and the 25th amendment are real and many people will quit...”

McEnany reportedly responded “Love that. Thank you. That is the playbook. I will help reinforce...,” though it is unclear what else she may have said.

In another partial exchange relayed by the committee, Hannity said it was “key” to keep Trump away from certain people, writing, “No more crazy people,” to which McEnany responded, “Yes, 100%.”

The exchange opens another avenue of inquiry the committee hopes Ivanka Trump can clarify.

“The Select Committee would like to discuss this effort after January 6th to persuade President Trump not to associate himself with certain people, and to avoid further discussion regarding election fraud allegations,” they wrote.

The letter to Ivanka Trump asking her to sit with the committee as soon as early February is the latest in a string of voluntary requests from the panel, including those sent to House Minority Leader Kevin McCarthy (R-Calif.) and Reps. Jim Jordan (R-Ohio) and Scott Perry (R-Pa.).

Rep. Bennie Thompson (D-Miss.), the chairman of the Jan. 6 select committee, said he also expects this month to invite Pence to speak with the panel.

is the press just going to ignore all the videos that clearly show security letting the people in, even moving barricades, even holding the doors open to let them in.

Why doesn't anyone question Queen Pelosi, She was in charge of protecting the capital. As speaker of the house, that is one of her responsibilities.

lol 😂😂😂😂 so when the broken inside the capital saying kill Pence that wasn't a attack? WHAT??? lol you are in a cult you need to go get some serious help.... All of America saw what they did. It wasn't a peaceful protest it was a insurrection on the capitol also an attack on the people working inside the capital and murder....

In the latest set of text messages between the Fox News host and Trump's former chief of staff, Meadows told Hannity to "Stress every vote matters."
PRESIDENTIAL ELECTION・26 DAYS AGO
WashingtonExaminer

With a key Senate primary still in the balance, Donald Trump is again casting doubt on election integrity without offering any evidence.
PENNSYLVANIA STATE・3 DAYS AGO
Fox News

Greene testified on Friday that she didn't recall whether she asked Trump to invoke military rule, despite telling Meadows to relay the idea to Trump.
ATLANTA, GA・26 DAYS AGO
Fox News

EXCLUSIVE: A group of Republican senators is introducing legislation to block the Biden administration from sending personnel and funding from the Department of Veterans Affairs (VA) to alleviate the crisis at the southern border. The senators are alarmed by the Biden administration's announced termination of Title 42 on May 23,...
CONGRESS & COURTS・25 DAYS AGO
The Independent

Robin Roberts has spoken candidly about why she nearly turned down an opportunity to interview Barack Obama about marriage equality.The Good Morning America host, 61, discussed her 2012 interview with former president Obama during an appearance on The Ellen DeGeneres Show, where she revealed that she had concerns about the interview and her sexuality, as she didn’t want to be “outed” as gay because of the conversation.“In 2012, I got a call to go to the White House, and that there was a possibility that then-president Barack Obama would change his stance on marriage equality,” Roberts recalled to DeGeneres. “I...
CELEBRITIES・26 DAYS AGO
Newsweek

Support for Republican Mo Brooks is surging after former President Donald Trump withdrew his endorsement of the "woke" congressman, according to a new poll.
ALABAMA STATE・2 DAYS AGO

The former president referenced scoring well on a cognitive test in 2018, which is designed to detect whether a person has early stages of dementia.
DELAWARE COUNTY, OH・27 DAYS AGO
Newsweek

"This should never have been allowed to occur to my colleague," Representative Matt Gaetz said about the legal challenge seeking to disqualify Greene.
GEORGIA STATE・26 DAYS AGO
Salon

Viktor Yushchenko says Putin has become a "completely isolated and brutal despot who cannot stand any opposition."
POLITICS・27 DAYS AGO

Last Monday, Malcolm Nance, an MSNBC talking head and former sailor in the United States Navy, showed up on the channel by satellite from Ukraine, dressed to kill. He wielded an assault rifle and wore full-camo military dress, including a ballistic helmet, and U.S. and Ukrainian flag patches. About a month ago, he said, he decided he was “done talking.” He then talked about how he had joined Ukraine’s international legion to help the country “fight [against Russia’s] war of extermination—an existential war.” Others have traced a similar journey. Andy Milburn, a journalist and ex-Marine who stopped writing and began training Ukrainians for combat, wrote an article about how he, too, was finished writing articles about Ukraine. “It just started to seem so frivolous,” he wrote, solemnly. “I didn’t want to be an observer.”
MILITARY・26 DAYS AGO