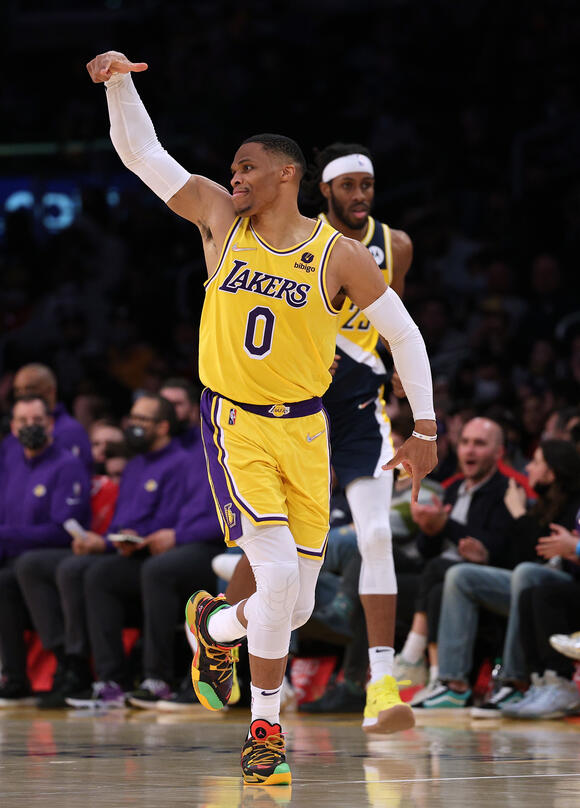 Russell Westbrook of the Lakers reacts to his three pointer in front of Isaiah Jackson of the Indiana Pacers during the first half at Crypto.com Arena on Jan. 19, 2022 in Los Angeles, California. (Getty Images)

Vogel sat the 33-year-old Westbrook for the final four minutes of the fourth quarter of the Lakers 111-104 home defeat at Crypto.com Arena. He was subbed out for Malik Monk.

Westbrook also left the court with just over 8 seconds left in the game, according to ESPN reporter Dave McMenamin.

Sources told McMenamin that Vogel received support from Laker’s leadership to make decisions as he sees fit regarding Westbrook’s playing time and role on the team.

“(I’m) playing the guys I thought were going to win the game,” Vogel responded when questioned by reporters about his decision to bench Westbrook.

Westbrook finished the game with 14 points on 5-of-17 shooting from the field in 27 minutes. He also had two assists, three rebounds and a steal.

The Lakers have lost four of their last five games and have again dropped to under .500. They are clinging to the No. 8 spot in the competitive Western Conference.

A 37-point blowout loss Saturday night to the Denver Nuggets prompted James to issue an apology to Lakers fans.

“#LakerNation I apologize and I promise we’ll be better!” James tweeted Sunday.

A Louisville woman has filed for an emergency protective order against Cleveland Cavaliers guard Rajon Rondo and alleges the former Kentucky star brandished a gun and threatened her life.The woman alleges Rondo "became enraged" last week and filed for the EPO on Friday in Jefferson County Family Court, news outlets reported. She says in the EPO that Rondo was playing video games with a child when she asked the child to finish separating his laundry so she could wash the family's clothes.When the child got up to do so, she said Rondo ripped the video game console out of the...
LOS ANGELES, CA・16 HOURS AGO