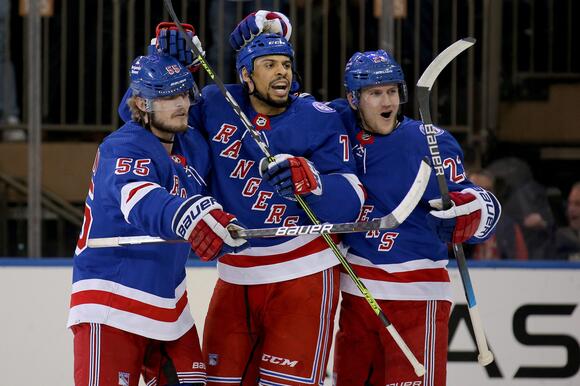 After overcoming a pair of two-goal deficits against the high-powered Maple Leafs on Wednesday night, the Rangers are back in first place in the Metropolitan Division, which Ryan Reaves says is another clear sign that this New York team is a true contender in the Eastern Conference.

“I think we know it,” Reaves said after the Blueshirts took down Toronto 6-3 in front of a frenzied Madison Square Garden crowd. “I think maybe some of the league doesn't believe it, but let them keep believing that. We're gonna keep doing our thing and, I mean, the standings don't lie.”

As of now, the standings have the Rangers with a two-point lead over the Hurricanes in the division race, with the Panthers and Lightning as the only two teams ahead of them in the East. Reaves was one of many new faces brought in over the offseason to give New York a makeover in the toughness department, and so far, it has resulted in a much improved product on the ice, with the franchise heading towards an end to its current playoff drought.

Wednesday’s win was just another piece of evidence that the Rangers resurgence is for real.

“It shows we can hang with the big boys, that we are one of the big boys,” Reaves said. “We gotta keep beating the playoff teams. That’s something we’ve talked about. We’re proving to the league and to ourselves that we’re a contender.”

Toronto was shorthanded due to multiple players still in COVID-19 protocols, but New York received its big scoring boost from an unexpected source in Reaves, who eclipsed last year’s scoring total and netted his first goal in a Rangers sweater in one night, burying two in the back of the net to help lead New York’s comeback, and give the team another momentum boost as it will take its three-game winning streak to Raleigh on Friday night to take on another contender in the Hurricanes.

“I felt good. Didn’t change much. Had a terrible nap, a Red Bull, and felt good.”

The Masterson Trophy is awarded annually to the NHL player who “best exemplifies the qualities of perseverance, sportsmanship, and dedication to ice hockey.” Philly’s Kevin Hayes and Montreal’s Carey Price are the other two finalists.
ELMONT, NY・1 DAY AGO
WFAN Sports Radio

Game 1 will be Wednesday night in Carolina, and the three games at MSG are set for May 22, May 24, and May 28 if necessary. The first four games will be broadcast on ESPN.
NEW YORK CITY, NY・1 DAY AGO

The Jets’ QB/WR tandem had ice-level, center ice seats for the Blueshirts’$2 4-3 OT win over the Penguins, and celebrated raucously with the crowd after Artemi Panarin netted the series winner.
NEW YORK CITY, NY・1 DAY AGO
WFAN Sports Radio

Megill threw a season-high 94 pitches against Atlanta on May 4, then lasted just 1 1/3 innings in a disastrous outing against the Nationals on Wednesday.
NEW YORK CITY, NY・2 DAYS AGO
WFAN Sports Radio

Rangers top Penguins 4-3 in OT, complete comeback from down 3-1 to win series

For the fourth time in franchise history, the Rangers came back from down 3-1 in a series to force a Game 7 - and thanks to Artemi Panarin’s OT powerplay game-winner, they have now won all four of those Game 7s.
NEW YORK CITY, NY・2 DAYS AGO

The Mets announced on Tuesday that Jacob deGrom’s stress reaction in his right scapula has shown continued healing, and he will continue his throwing program.
NEW YORK CITY, NY・11 HOURS AGO
WFAN Sports Radio

Gleyber Torres made a dazzling double play in Baltimore on Monday night, another landmark in what has been a drastically improved season in the field.
NEW YORK CITY, NY・12 HOURS AGO
WREG

Decisions loom for Grizzlies on Jones and Anderson

MEMPHIS – The future is bright for the Memphis Grizzlies. While most of the roster seems set moving forward, for the second youngest team in the NBA, two of the team’s top reserves may have played their final game in the Beale Street Blue. While most of the focus this offseason is on the extensions […]
MEMPHIS, TN・31 MINUTES AGO
WFAN Sports Radio

Sidney Crosby sounded off on the ‘terrible’ helmet rule that came to the forefront during game seven: ‘probably ended up being the difference.’
NEW YORK CITY, NY・12 HOURS AGO

Billy Eppler: Still no timeline for Jacob deGrom to begin throwing on mound

Mets general manager Billy Eppler told reporters that he is pleased with Jacob deGrom’s latest MRI, but says there is still no timeline for him to throw off a mound.
NEW YORK CITY, NY・10 HOURS AGO
WFAN Sports Radio

Metta Sandiford-Artest says it’s “irrationally personal” to him that the Knicks win a championship soon, but advised fans to avoid putting undue pressure on the team and ‘trust the process.’
NEW YORK CITY, NY・7 HOURS AGO
WFAN Sports Radio

IKF made a ‘bad read’ when thrown out trying to advance from second to third on Kyle Higashioka’s sacrifice fly, turning a possible one-out, runner on second situation into a killed rally for the Yankees.
NEW YORK CITY, NY・2 DAYS AGO
WFAN Sports Radio

The Jets moved back into the first round to select Johnson - who was in their Top 8 - at No. 26, and his deal is reportedly worth $13.1 million with a $6.7 million signing bonus.
EAST RUTHERFORD, NJ・11 HOURS AGO
WFAN Sports Radio

Strong words from Metta Sandiford-Artest in an interview with SNY, as he admitted he, like Irving, was fearful of taking the COVID-19 vaccine, and likened it to the infamous study from years ago.
NEW YORK CITY, NY・9 HOURS AGO
WFAN Sports Radio

Joey Gallo struck out four times on Monday and said he isn’t the type of player that will play small ball or take the ball to the opposite field, and Craig says he needs to go.
NEW YORK CITY, NY・8 HOURS AGO