Growth stocks in the tech sector have become one of the most significant victims of the recent market sell-off. The Nasdaq Composite is trading down roughly 10% from its all-time high and funds driven by growth-oriented tech stocks like the ARK Innovation ETF have lost approximately half of their value over the last year.

However, this decline has also offered investors the opportunity to buy big growth names at a substantial discount. DigitalOcean (NYSE: DOCN) and Lemonade (NYSE: LMND) are two such stocks that might just be worth buying right now. Let's find out a bit more about them. 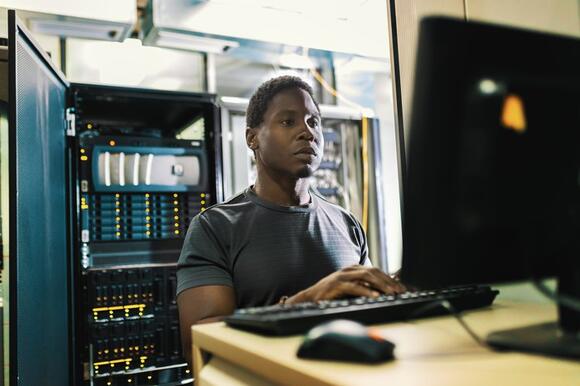 DigitalOcean has carved out a lucrative niche by targeting small- and medium-size enterprises (SMEs), a market ignored by the biggest names in tech such as Amazon and Microsoft . Cloud computing for the little guy is a big deal as SMEs make up 99.7% of all businesses in the U.S., according to the Small Business Administration.

DigitalOcean attracts these clients in two ways. First, it uses simple, straightforward, and affordable pricing. Clients only have to buy as much cloud infrastructure as they need, and knowing the costs before signing up makes DigitalOcean a more attractive choice for these entrepreneurs.

Second, it has built a community around its platform. A large percentage of DigitalOcean clients are one-person IT operations. The community allows these professionals to give and receive information that helps them solve problems without relying on outside consultants. This fosters a personal touch that could dissuade clients from turning to larger providers.

Its approach has attracted almost 600,000 clients in 185 countries. It also helped the company bring in $309 million in the first nine months of 2021, 34% more than in the first three quarters of 2020. Additionally, in the third quarter, the company reported net dollar retention of 116%, meaning the average client spent 16% more with the company than in the prior year.

The selling that hit other tech growth stocks has also taken down DigitalOcean. It now sells at a 55% discount to its November high. Still, the decline has taken the price-to-sales (P/S) ratio down to 14. Also, with analysts predicting a 32% revenue increase on a consensus basis for 2022, it will likely maintain its current growth rate for the foreseeable future.

Admittedly, competing with the largest companies in the world can intimidate investors. But with its straightforward approach and the community DigitalOcean has built, SMEs will probably continue to turn to it.

Lemonade has prospered by targeting an industry ripe for change: insurance. The industry continues to rely on an expensive, commission-based process. Lemonade replaces this model by using artificial intelligence and behavioral economics to power the buying process.

The company offers coverage for homeowners, renters, autos, condos, and pets, and it had a customer count of almost 1.4 million in the third quarter of 2021. It also allocates a specific percentage of revenue to claims. If any of this money remains, the customer's portion is donated to a charity of the customer's choice.

Despite this potential, the growth tech stock's price has fallen by about 80% from its 52-week high. It began falling early in the year amid a generalized stock sell-off and rising insurance claims. Loss ratios, or the claims paid out versus premiums collected, rose to 121% in the first quarter of last year as the ice storm in Texas brought a spike in claims. Additionally, although loss ratios had fallen to 77% by the third quarter, they had ranged from 67% to 72% in 2020, meaning some added pressure on the company's margins persists.

Still, in the first three quarters of 2021, revenue of $87 million rose 18% versus the same period in 2020. This occurred in large part because of a revenue increase of 101% in the third quarter year over year. Also, its P/S ratio has fallen to 18, the lowest valuation since it went public. Furthermore, revenue growth will likely ramp up in 2022, with analysts forecasting a 72% increase in revenue for the year. Such anticipated revenue growth and its record low valuation could spark a comeback in Lemonade stock.

Find out why Digitalocean Holdings, Inc. is one of the 10 best stocks to buy now

They just revealed their ten top stock picks for investors to buy right now. Digitalocean Holdings, Inc. is on the list -- but there are nine others you may be overlooking.

Coca-Cola and Colgate-Palmolive both generate plenty of cash flow to support their ever-growing payouts.
STOCKS・2 DAYS AGO
The US Sun

MILLIONS of Americans are set to receive Social Security checks worth up to $1,657 tomorrow. The cash boost will come just 48 hours before Supplemental Security Income payments, worth up to $841, are set to land in around eight million bank accounts on April 29. Seniors with birthdays on the...
BUSINESS・27 DAYS AGO
inputmag.com

They're cheap, have strong moats, and are growing their businesses.
STOCKS・1 DAY AGO

This healthcare stock looks like a bargain today.
STOCKS・1 DAY AGO
Business Insider

These stocks have great long-term prospects.
STOCKS・22 HOURS AGO

At least not in electric vehicles.
ECONOMY・2 DAYS AGO
The Motley Fool