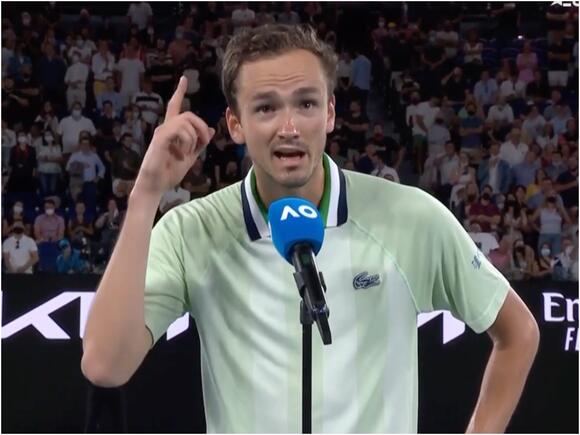 Daniil Medvedev clashed angrily with the crowd at the Australian Open after he knocked out homegrown favorite Nick Kyrgios in the second round on Thursday.

Throughout the match at the Rod Laver Arena, fans in the stands could regularly be heard shouting Cristiano Ronaldo's famous goal celebration "SIUUU."

Medvedev mistook the chants for jeers and did not hide his feelings about the crowd during his on-court interview after the match.

"[Remaining calm and focused] is the only choice when you get booed between first and second serve," he told four-time Grand Slam winner and US tennis legend Jim Courier. "You have to stay calm and win the match."

The comment prompted actual boos from the crowd, to which the Russian did not take kindly.

"I'm sorry I can't hear you," he told Courier as he tried to speak again. "Guys, I can't hear him, please. Show some respect for Jim Courier, he won here guys, thank you.

Despite Courier eventually explaining to Medvedev that he wasn't being jeered and instead the crowd were imitating Ronaldo, the 25-year-old further expressed his annoyance in a separate interview with Eurosport, suggesting those responsible have a "low IQ."

"No, it's not angry it's just disappointing like I guess it's normal that everybody experiences it really, especially when you play not just a home favourite but Nick," he said.

"I had a few moments on my serve, many games were actually quiet easy for me, but a few moments were tough and he managed to make some good returns.

"Then I have break point second serve and people are cheering like you've already made a double fault. That's just disappointing. It's not everybody that's doing it but the people doing it probably have a low IQ."

Medvedev isn't the only player in Melbourne to have been irked by Ronaldo impersonators.

Andy Murray faced a similar problem during his first round win over Nikoloz Basilashvili on Tuesday, with the Scot describing the chants as "painful."

"Initially, I thought it was [jeering], because there were some people booing during my practice yesterday. I have no idea what for, so originally that's what I thought it was," he said.

"But then after a few times it was like, 'No, they're doing that, I think it's like "SIUUU" or something that Ronaldo does when he scores. And, yeah, it was incredibly irritating."

Just 19, Carlos Alcaraz, tennis' next big thing, plays like Federer, has won more than $5 million, and has the French Open title in his sights

The Spanish teenager has already won four titles this year and now has his eyes on winning the French Open.
TENNIS・5 HOURS AGO
Insider

Atsamaz Tebloev is facing expulsion from the International Wrestling League of Poddubny, after throwing an illegal shot, a punch, at a rival in the middle of a match.
COMBAT SPORTS・4 HOURS AGO