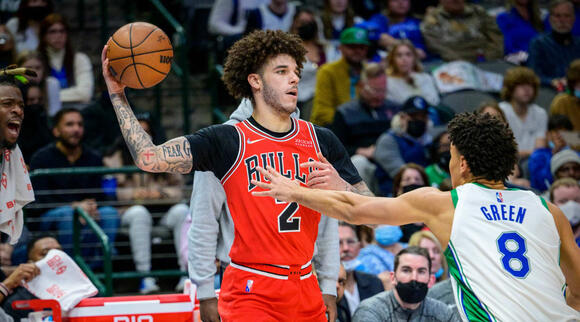 The team said he is expected to return in six-to-eight weeks.

Bulls guard Lonzo Ball has been diagnosed with a small meniscus tear in his left knee, according to The Athletic 's Shams Charania.

The team announced Thursday, Ball will undergo arthroscopic surgery on his left knee and is expected to return in six-to-eight weeks.

Bulls coach Billy Donovan had addressed the possibility of surgery on Wednesday, noting “we haven’t gotten to that point,” per NBC Sports Chicago's K.C. Johnson. Donovan had told reporters Ball was receiving therapeutic treatment to try to alleviate knee pain.

Ball hasn't played since Jan. 14, when the Bulls suffered a 138-96 loss to the Warriors. He had missed three consecutive games prior to Thursday's report.

Ball is in his first season with Chicago, who is currently tied with the Heat atop the Eastern Conference standings. He is averaging 13 points, 5.4 rebounds and 5.1 assists in 34.6 minutes per game.

As noted by NBC Sports Chicago, Ball underwent arthroscopic surgery on same knee in July 2018 to address another small meniscus tear. It is believed he dealt with that injury throughout his rookie season.

He retired from coaching after the 2021 season.
NBA・2 DAYS AGO
Sports Illustrated

Los Angeles would reportedly be interested in Rivers if he became available.
LOS ANGELES, CA・23 HOURS AGO
Sports Illustrated

Dallas‘s forward wore the same color as the Warriors for two straight games on the bench.
DALLAS, TX・2 DAYS AGO
Sports Illustrated

The Michigan coach was pursued by the Lakers for their head coaching vacancy.
LOS ANGELES, CA・2 DAYS AGO

Jimmy Butler Intends to Play in Game 4 vs. Celtics, per Report

Bet on this three-leg, same-game parlay for Game 5 of the Eastern Conference finals between the Heat and the Celtics.
MIAMI, FL・55 MINUTES AGO
Sports Illustrated

Plus, Mavericks extend series with Warriors and a Stanley Cup playoffs update.
BOSTON, MA・1 HOUR AGO

Both made epic entrances to their latest pregame shows.
NBA・2 DAYS AGO
Sports Illustrated

Pistons, Bulls to Play Regular-Season Game in Paris in 2023

The NBA will make its first appearance in the French capital since 2020.
DETROIT, MI・1 DAY AGO
Sports Illustrated

Kidd: Mavs Will Play ‘With Heavy Hearts’ After Texas Shooting

Warriors coach Steve Kerr said, “I’m so tired of getting up here and offering condolences. I’m tired of the moments of silence.”
UVALDE COUNTY, TX・15 HOURS AGO

The Bucks forward received 100% of the votes needed for his first-team selection.
NBA・15 HOURS AGO
Sports Illustrated

One-on-One With Celtics' Grant Williams: The Art of Being a Role Player

The Boston forward talks about who he models his game after, his toughest assignments and more.
BOSTON, MA・2 HOURS AGO
Sports Illustrated

Andrew Wiggins Is Exactly Who the Warriors Needed Him to Be

Golden State is one win away from the Finals, thanks in part to a forward-thinking trade the organization made two seasons ago.
SAN FRANCISCO, CA・2 DAYS AGO
Sports Illustrated

Kidd: Mavericks at ‘Beginning’ of Journey with Luka Doncic

Dallas faces a deep hole ahead of Game 4 of the Western Conference finals.
DALLAS, TX・2 DAYS AGO
Sports Illustrated

Boston added yet another blowout to a series full of them, and Miami looks battered and broken down. But it’s anyone’s guess what happens next.
BOSTON, MA・1 DAY AGO
Sports Illustrated

Mavs Avoid Sweep Against Warriors on Emotional Day in Dallas

Game 4 of the West finals went to the Mavs, but the focus wasn't just on basketball for both teams.
DALLAS, TX・4 HOURS AGO
Sports Illustrated

So, About My Warriors-Mavs Prediction ...

If we turn back the clock precisely a week ago, there was a man who made a particularly bold claim: The red-hot Mavericks, fresh off embarrassing the top-seeded Suns, would also go on to knock off the Warriors to reach the NBA Finals. The column laid out valid enough reasoning, highlighting ...
1 DAY AGO