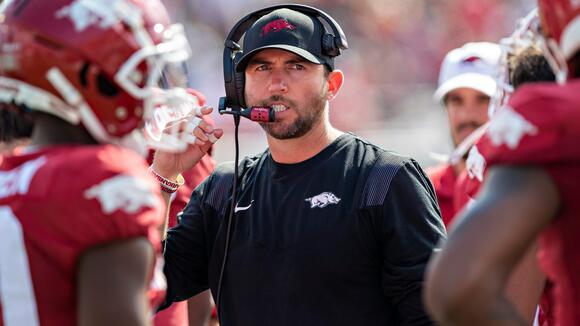 Sam Pittman got a belated Christmas gift off his wish list Thursday, as offensive coordinator Kendal Briles reached a new deal to remain with Arkansas according to ESPN's Chris Low.

Briles had reportedly been offered the same position at Miami under new Hurricanes coach Mario Cristobal.

Pittman spoke in December about the looming possibility of his coordinators leaving.

“Obviously, people are coming after our coaches," he said. "But my Christmas wish list would be keep who we have intact, and hopefully we can do that."

TRANSFER TRACKER:Here are the Arkansas football players in the transfer portal and where they've landed

Briles has been with Arkansas for two seasons. In those years, Arkansas averaged 391.5 total yards per game in 2020 and 442.5 in 2021. Quarterback KJ Jefferson has benefited from Briles' leadership: This season, Jefferson's 21 touchdowns to four interceptions put him No. 10 in the nation in passer rating.

Briles is the son of Art Briles, the former Baylor coach at the center of a sexual assault scandal in 2016. The younger Briles had ties to Florida before Miami came calling, having been offensive coordinator at Florida Atlantic under Lane Kiffin and Florida State under Willie Taggart.

Next on Pittman's wish list will be keeping defensive coordinator Barry Odom, who could also be on other coaches' lists.

Christina Long covers the Arkansas Razorbacks. You can email her at clong@swtimes.com or follow her on Twitter @christinalong00.