Omicron is infecting more kids than any prior variant. Here are the most common symptoms in children, according to experts. 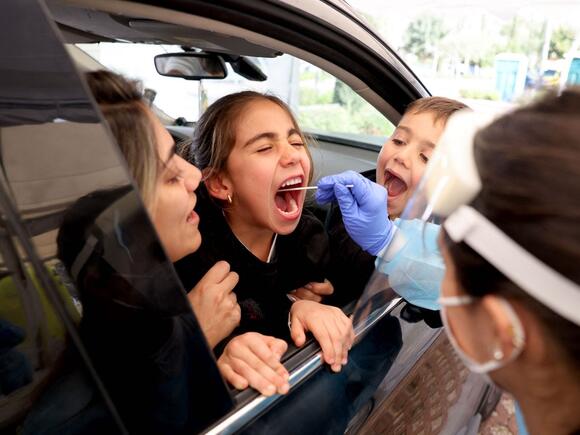 As waves of the Omicron coronavirus variant surge around the world, children are falling sick more than they used to.

Although it is spreading widely, the variant is causing less severe illness overall, and children are especially unlikely to become seriously ill.

Insider spoke to experts and received some early data to help figure out what kind of symptoms kids tend to show from Omicron infections.

The most commonly noted were tiredness, sneezing, coughing, or a sore throat.

Duncan, a medical professor at King's College London, spoke to Insider about her work tracking symptoms of COVID-19 in children via the long-running ZOE COVID-19 study .

The study uses an app to allow participants to log their symptoms daily.

Based on preliminary results from a couple hundred cases of Omicron in kids aged 12-8, Duncan listed the following symptoms:

In some cases, kids develop croup, when an airway infection makes a child sound like a seal or a dog barking when they cough.

Duncan noted that her data does not include asymptomatic cases of COVID-19. Most children in Duncan's set had been vaccinated, though she said patterns were "very similar" in unvaccinated children.

Vaccination seems to diminish the frequency and length of the symptoms, but it's too soon to know for sure, she said.

View from the frontline

Doctors working with children told Insider this report fits with what they have seen.

"Most children are getting upper respiratory/cold-like symptoms, regardless of age," Dr. John McGuire, chief of Seattle Children's pediatric critical care division, told Insider in an email.

Intestinal distress symptoms, fever, rashes, are also "good symptoms for parents to monitor for," he said.

Dr. Buddy Creech, director of the Vanderbilt Vaccine Research Program, said he has also been seeing mostly respiratory symptoms in this wave.

Dr. Lisa Saiman, Professor of Pediatrics at Columbia's Vagelos College of Physicians and Surgeons, said that croup appears to be an Omicron-specific symptom.

Saiman said that parents should not be overly worried, despite the concerning sound, as it typically "gets better on its own."

Another presentation said Saiman she was seeing in the hospital is bronchiolitis.  "These children present with a cough and wheezing and sometimes need to be hospitalized if they are having any difficulty breathing," she said.

Both of these symptoms, however, can be caused by other respiratory illnesses. "Take home for parents is that it is very difficult to determine whether cold symptoms or croup-like symptoms are due to COVID or other seasonal respiratory viruses," Creech told Insider in an email.

Unfortunately, the 27-year-old mother and the 31-year-old father say their baby daughter has months to live. The 1-year-old child is suffering from a rare condition which was caused by a gene defect both parents carry. The parents knew something was wrong with their child when the baby started to go off her food at six weeks. The baby also started to lose weight, the couple said. The condition was confirmed with genetic testing and the doctors said it affects her ability to absorb the nutrients she needs from food. The condition is so rare it is thought to only occur in one in 79,000,000 people, the doctors said.
WEIGHT LOSS・26 DAYS AGO
Daily Mail

Walking at a brisk pace for just 75 minutes every week could cut your risk of depression, a new study finds. The World Health Organization recommends everyone should exercise for at least two-and-a-half hours every seven days. But researchers at Cambridge University, England, found adults who got half as much...
FITNESS・26 DAYS AGO
House Digest

Though helpful for cleaning and disinfecting, Lysol contains a number of harmful chemicals that can irritate your eyes, skin, and respiratory system.
HEALTH・25 DAYS AGO
The US Sun

WHEN little Rio Fowler started to vomit and suffer with diarrhoea, his parents feared he'd been struck by a tummy bug. Mum Karen and dad Ryan said their daughter who was in pre-school had gastro so thought he had caught it off her. The 15-month-old had to be taken to...
KIDS・25 DAYS AGO

According to the boy’s mothers, a teacher at the charter school decided to cut their son’s hair while he was in distress, instead of calling them for help. Now, the mothers claim that this will not go unnoticed until everyone is held accountable. The boy’s parents were reportedly upset that the teacher didn’t find a more effective way to help their son aside from cutting his hair. The boy’s mothers also said that their son was proud of the afro he was growing. “What made her think that this is OK? if you were going to help my child why wouldn’t you do it the proper way, common sense way, the helpful way? By getting him some real help?” one of the mothers said.
MINNESOTA STATE・25 DAYS AGO
The US Sun

MILLIONS of Brits have been urged to take up a rapid test to see if they have bowel cancer. The Health Secretary has called on men over 60 to make sure they have the life-saving checkups. It couldn't be easier - with a home testing kit on offer, or use...
CANCER・26 DAYS AGO
outbreaknewstoday.com

In a follow-up on the 14th Ebola Virus Disease (EVD) outbreak in the Democratic Republic of the Congo (DRC) (HERE and HERE), the World Health Organization (WHO) tweeted today:. Health authorities in #DRC confirmed a 2nd case of #Ebola in Mbandaka on 25 April. The 25-year old woman, now deceased, began experiencing symptoms 12 days earlier. Investigations indicate that as the 1st case patient’s sister-in-law, she was a high-risk contact.
PUBLIC HEALTH・25 DAYS AGO
Newsweek

Christine Bronstein took at home colon cancer test after seeing blood in her stool. It was positive, but her doctor texted: "You don't have cancer :)"
CANCER・25 DAYS AGO
MedicalXpress

Tragic events like wars, famines, earthquakes, and accidents create fearful memories in our brain. These memories continue to haunt us even after the actual event has passed. Luckily, researchers from Tokyo University of Science (TUS) have recently been able to understand the hidden biochemical mechanisms involved in the selective suppression of fearful memories, which is called fear extinction. The researchers, who had previously demonstrated fear extinction in mice using the chemically synthesized compound "KNT-127," have now identified the underlying mechanism of this compound's action. Their findings have been published recently in Frontiers in Behavioral Neuroscience.
SCIENCE・26 DAYS AGO
Business Insider

The measure will reportedly be repeated for the next three years, keeping cats inside from April to August. Owners face a fine if the rule isn't followed.
ANIMALS・15 HOURS AGO
Newsweek

"This is very concerning," wrote one commenter. "It's so much bigger than mac and cheese."
INTERNET・25 DAYS AGO
Business Insider

On Thursday, the White House said the first batch was being sent from Switzerland to Indiana.
SAN ANTONIO, TX・2 DAYS AGO
Medical News Today

Meth: How long does it stay in the system?

Methamphetamine is a powerful stimulant drug that can cause serious health consequences. Long-term meth use can cause memory loss, aggression, drug-induced episodes, and severe dental problems. In the United States, the law classifies meth as a Schedule II drug, and about 2.6 million people reported using it in 2019. Meth...
PHARMACEUTICALS・2 DAYS AGO
Business Insider

I tried a relatively affordable LED face mask for healthier skin. I think it worked, but it's a hassle to use every day.

I tried a $109.95 LED face mask, and I think it worked. It's like a relaxing spa treatment in your home, from the company Beautimate.
SKIN CARE・18 HOURS AGO
Business Insider

Around the country, parents struggling to find formula are feeding their infant children homemade formula or substitutes, which doctors warn against.
HEALTH・14 HOURS AGO