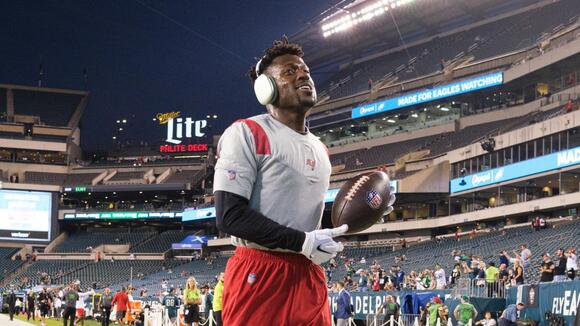 Antonio Brown further discussed his exit from the Buccaneers in a conversation with former Pro Bowl receiver Brandon Marshall.

Antonio Brown hasn't shied away from the limelight since exiting Tampa's Week 17 win over the Jets. Brown has been active on social media in his criticism of Buccaneers coach Bruce Arians, something he continued on Wednesday.

Brown appeared in a video alongside former Pro Bowl receiver Brandon Marshall as the two discussed Brown's dramatic on-field exit. Brown seemed to take exception with Arians's approach to their exchange during the third quarter, a conversation that led to Brown taking off his jersey and running into the tunnel.

Marshall attempted to give advice to Brown during Wednesday's conversation, noting it would have been better for Brown to simply stay on the sideline and address his issue with Arians postgame. Brown didn't necessarily agree with Marshall's notion.

“Everyone in the world got a different form of reaction [based] on what happened to you,” Brown said when explaining his abrupt exit. "And it’s all based on where you from and how you feel.”

Brown was released by the Buccaneers days after leaving the sideline. He tallied 87 receptions across 15 games with Tampa, including two touchdowns in last year's playoffs.

The former star running back took his wife’s last name and explained why.
NFL・1 DAY AGO
Sports Illustrated

It’s possible Carolina could still strike a deal for the Cleveland quarterback.
CLEVELAND, OH・1 DAY AGO

The undrafted rookie made a one-handed grab at practice but that wasn’t the most impressive part for the quarterback.
KANSAS CITY, MO・1 DAY AGO
Sports Illustrated

The Lakers legend has only appeared on ESPN once this entire NBA season.
LOS ANGELES, CA・1 DAY AGO
Sports Illustrated

Add Colin Cowherd to the list of prominent national voices criticizing Bill Belichick and the New England Patriots’ offseason. Cowherd believes the Pats have gone from being ahead of the rest of the NFL on trends to falling behind.
FOXBOROUGH, MA・8 MINUTES AGO
Sports Illustrated

The Raiders could decide to sign Colin Kaepernick.
2 HOURS AGO
Sports Illustrated

The Bucs quarterback caused quite a stir with his latest social media post.
NFL・1 DAY AGO

It's only OTAs, but the Jets’ QB looks set up to improve in his second season.
NFL・4 HOURS AGO
Sports Illustrated

“Super happy for Aaron [Rodgers]… The dude deserves it, obviously what he has done the last two years.”
GREEN BAY, WI・1 DAY AGO
Sports Illustrated

After missing rookie season, Etienne has potential to be a dangerous all-purpose back.
NFL・3 HOURS AGO
Sports Illustrated

The tryout is a trial balloon for the rest of the NFL, which may finally lead to an opportunity to make a roster.
LAS VEGAS, NV・1 DAY AGO
Sports Illustrated

The ESPN radio hosts are preparing for a two-on-two challenge.
DURHAM, NC・1 DAY AGO