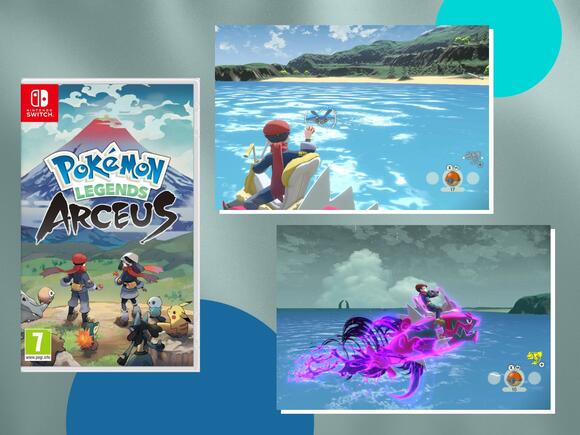 Yet again, it appears that the latest title in the Pokémon series, Pokémon Legends: Arceus has been leaked online. If you were hoping to enjoy the game spoiler-free ahead of its release on 28 January, then it might be a good time to stay away from Twitter and the fan sites.

Details of the highly anticipated Nintendo Switch title were first seen within the last few days. Footage and screenshots have been making the rounds from gamers who somehow managed to get their hands on an early copy and now it appears that details of the game’s Pokédex – the full list of monsters set to make an appearance – have also surfaced.

This isn’t the first time details of the bestselling franchise have made their way onto the internet before a big release, and with just a few days left before the wider public gets their hands on it, it’s likely that these leaks will persist.

The leaks from Pokémon Legends: Arceus that have been making the rounds on social media can’t be verified as the game has yet to officially be released, but a Google Drive folder (that has since been made private) containing a detailed list of Pokémon names and stats recently appeared online, albeit briefly.

A few new Pokémon have been announced through trailers and official screenshots released by Nintendo, such as the Hisuian variants of existing creatures, but the list that was seen online includes names that haven’t been officially revealed.

It should be mentioned that Nintendo doesn’t take leaks lightly and The Pokémon Company has taken serious legal action in the past. In 2019, two defendants were made to pay $150,000 each for releasing pages from the official Sword and Shield strategy guide ahead of its publication.

We won’t be posting any of the information seen from the leaks, for those who are hoping to have a spoiler-free experience, but you can read more about how to pre-order the game here .

For discounts on games and offers on consoles, try the links below:

To find out more details on how to buy ‘Pokémon Legends: Arceus’ read our full pre-order guide for more details

As part of a lawsuit between shareholders and Elon Musk regarding his “funding secured” tweet, new text messages and emails between Musk and people involved have been released. The communications pretty much confirmed how most people saw the situation: Elon Musk took a meeting with the head of...
BUSINESS・20 DAYS AGO
The Independent

Mark Hamill has revealed he lost thousands of followers on Twitter in the space of a few hours yesterday (25 April).While the exact reason for the exodus has not been confirmed, his tweet came shortly after it was announced that Elon Musk is set to purchase the social media platform in a deal worth $44bn.Since the news broke, many users of the site (including Jameela Jamil) have announced their intention to delete their accounts, owing to Musk’s reputation as a politically controversial figure. It is believed this could be the reason for Hamill’s loss in followers.“Weird. I just lost...
CELEBRITIES・19 DAYS AGO
HipHopDX.com

Ice Cube returned from a trip to Morrison, Colorado last week where he performed at the historic Red Rocks Amphitheater alongside Cypress Hill, E-40 and Too $hort for the annual 420 on the Rocks show. Now presumably back at home in Los Angeles, the N.W.A legend has turned his attention...
MORRISON, CO・20 DAYS AGO

Once again, Disney (DIS) - Get Walt Disney Company Report is finding itself embroiled in a political quagmire owing to its support of the LGBTQ community, after Florida Gov. Ron DeSantis punished Disney for denouncing his “Don’t Say Gay Bill,” by seeking to revoke Disney World’s designation as a special tax district (which as we pointed out, is ultimately a meaningless gesture).
FLORIDA STATE・19 DAYS AGO
Inc.com

Jeff Bezos, the founder and former CEO of Amazon, and Elon Musk, the CEO of Tesla and soon-to-be owner of Twitter, don't strike me as best buds. The two men have competed over the past few years for the title of the world's richest man, a title Musk holds. They also sort of compete in space, with Bezos' Blue Origin competing against Musk's SpaceX.
BUSINESS・19 DAYS AGO
Newsweek

Dorsey, who was CEO of the company until November 2021, took to the platform to pen his thoughts on the new changes.
BUSINESS・19 DAYS AGO