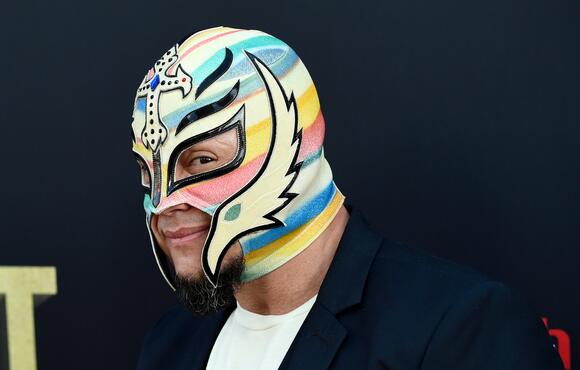 Rey Mysterio used to fight with his young son for bragging rights when they played wrestling video games together.

The WWE high-flying superstar has plenty to boast about now — he's on the cover of the WWE 2K22 video game set for a March 11 release.

“It’s a moment of great pride, not just for me, but for the generations that come after me. All my people, all the Latinos ” Mysterio said.

Even better, Mysterio is a playable character with his son, Dominik. The younger Mysterio wrestled his first WWE match in 2020 and later became tag-tag team champions with his father.

Mysterio was named the cover star on Thursday as the video game from developer Visual Concepts is back after a two-year hiatus. Mysterio joined Brock Lesnar and “Stone Cold” Steve Austin among the wrestling greats to make the cover.

Mysterio, who was wrestled around the world for various promotions since his 1989 debut, was selected in part to honor his 20-year career with WWE.

The 5-foot-6 Mysterio has long been one of WWE's most popular — and colorful — wrestlers thanks to his collection of masks he wears in honor of the Mexican tradition of lucha libre wrestling. He's won most major matches and championships in WWE, including the Royal Rumble Match in 2006 and the World Heavyweight Championship at WrestleMania later that year. The father-son duo won the SmackDown tag team titles last year.

“This moment that I'm living right now with my son, I never thought I was going to be able to live it,” the 47-year-old Mysterio said.

WWE 2K22 is available for pre-order on PlayStation 4, PlayStation 5, Xbox One, Xbox Series X'S in in both physical and digital formats, and on PC in digital formats. WWE 2K22 features four editions of the game: Standard Edition, Cross-Gen Digital Bundle, Deluxe Edition, and the New World Order 4-Life Digital Edition.

Partners in the ring, Mysterio wants a rematch with his son on a gaming system to prove he's the best in the family in the virtual squared circle.

“It's frustrating to a point because I could never beat Dom,” he said.

6ix9ine continues to take drastic measures in his pursuit of clout. Now, he's taunting Lil Durk about King Von's death with the use of a look-alike and a prop. On Tuesday (April 26), 6ix9ine shared a video on his Instagram page where he is standing on a street corner with a group of men, one of whom looks exactly like Lil Durk. The look-alike goes by the nickname Perkio. In the clip, Tekashi pulls a jacket out of a bag and one of the rapper's associates puts it around the shoulders of faux Durk, who looks scared.
CELEBRITIES・20 DAYS AGO