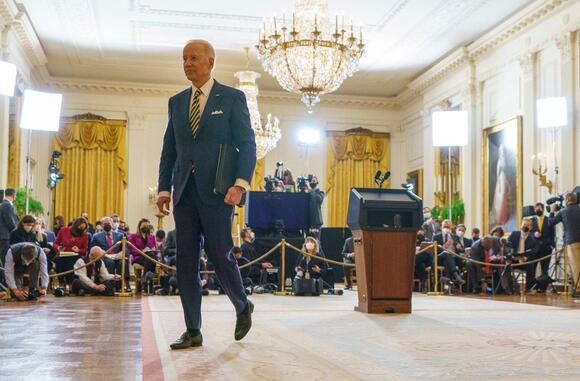 President Joe Biden is signaling that monthly payouts for an expanded child tax credit probably won’t make a comeback, even as he aims to get Congress to pass other parts of his social-spending and climate package.

“There’s two really big components that I feel strongly about that I’m not sure I can get in the package. One is the child-care tax credit. The other is help for the cost of community colleges,” Biden told reporters on Wednesday during a news conference that came at the one-year mark of his presidency.

“They are massive things that I’ve run on — I care a great deal about,” the president added, saying he’ll keep “coming back” to those issue later and try to get them done.

The monthly payments of up to $300 per child began on July 15 and ended with the payout on Dec. 15 . A key Democratic senator, West Virginia’s Joe Manchin, has opposed continuing them, leading other Democratic lawmakers earlier this month to look at ways to pare back the payments in order to get Manchin’s support.

The Biden White House last month also expressed openness to working with Republican Sen. Mitt Romney on the CTC payouts, after the Utah lawmaker called for a bipartisan approach on the issue.

Read more: Biden sees Build Back Better getting broken up so parts can pass

And see: Here’s what could make the cut for Biden’s smaller Build Back Better Act

Biden dropped his plan for two free years of community college from his Build Back Better package in October.

IF YOU DO, THEN THE SENIORS, vets and ssi get one to!!!!! NO MORE MONEY!!HELP WANTED SIGNS ALL OVER, GET A JOB, LIVE WITHIN YOUR MEANS!!!!!!

These people got more more than the ones working risking their lives everyday. I'm still working. It's time to show you care about the ones that don't have kids in school but work & pay taxes. Give us monthly stimulus money. Raise the pay. Give us credit

You mean you can't force a high tax and inflation on everything just so you can give people with kids already more money they didn't earn or work for?

U.S. inflation in April plunged to an annualized rate of 4.1% — less than half of where it stood in the prior month. This will no doubt come as a surprise for those of you who focus only on the financial headlines. They informed us that the Consumer Price Index dipped slightly in April, to 8.3% from 8.5%. This modest decline was less than what Wall Street had been expecting, and on the day it was reported the S&P 500.
BUSINESS・20 HOURS AGO
MarketWatch

U.S. stocks tumbled sharply Tuesday, resuming a selloff and sending the S&P 500 back toward bear-market territory after an earnings warning from Snapchat parent Snap triggered losses across the internet sector. How are stocks trading?. The Dow Jones Industrial Average. DJIA,. -0.89%. dropped 409 points, or 1.3%, to 31,471. The...
STOCKS・1 DAY AGO
WashingtonExaminer

"This should never have been allowed to occur to my colleague," Representative Matt Gaetz said about the legal challenge seeking to disqualify Greene.
GEORGIA STATE・29 DAYS AGO
MSNBC

A new Republican-backed law in Florida will repeal Disney’s special tax status, resulting in a property tax increase of up to 25% for residents of Orange County. MSNBC’s Lawrence O’Donnell explains how the move comes as GOP retribution for Disney’s opposition to Florida’s “Don’t Say Gay” bill.April 26, 2022.
FLORIDA STATE・29 DAYS AGO
Business Insider

"I'm very excited to finally tell my story," Kellyanne Conway said Monday during an interview with PEOPLE before the release of her memoir, Here's the Deal, out now. That story begins in a small town in southern New Jersey and follows Conway to Washington D.C., where a hard-earned career as a pollster and political consultant led to historic achievement as the first woman to run a successful presidential campaign when she helped elect Donald Trump in 2016 and served in his White House as senior counselor to the president.
RELATIONSHIPS・17 HOURS AGO
Business Insider

The intelligence the U.S. shared with Ukraine helped it continue to resist Russian invading forces and even shoot down a transport plane carrying hundreds of Russian troops, a new report revealed. According to current and former U.S. officials who spoke with NBC News on Tuesday, the U.S. provided critical intelligence...
MILITARY・28 DAYS AGO
Salon

MEXICO CITY — Mexican President Andrés Manuel López Obrador on Monday urged U.S. Latinos not to vote in November’s midterm elections for politicians who have “mistreated” them, in response to a comment by former U.S. President Donald Trump. Trump boasted at a rally in...
PRESIDENTIAL ELECTION・28 DAYS AGO
Business Insider