The Minnesota Reformer is an independent, nonprofit news organization dedicated to keeping Minnesotans informed and unearthing stories other outlets can’t or won’t tell. We’re in the halls of government tracking what elected officials are up to — and monitoring the powerful forces trying to influence them. But we’re also on the streets, at the bars and parks, on farms and in warehouses, telling you stories of the people being affected by the actions of government and big business. Minnesota Reformer is part of States Newsroom, a national 501(c)(3) nonprofit supported by grants and a coalition of donors and readers. Minnesota Reformer retains editorial independence. 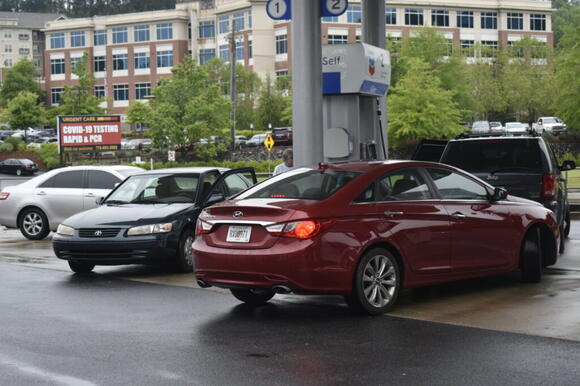 New federal powers are needed to prevent major energy disruptions like the cyberattack on the Colonial Pipeline that left the East Coast short of gas at the pumps for days, the chairman of the federal commission overseeing energy and some U.S. House Democrats said Wednesday.

A House Energy and Commerce subcommittee discussed a proposal by Rep. Bobby Rush, (D-Ill.), that would give the Federal Energy Regulatory Commission the power to impose basic standards for natural gas pipeline reliability and security. Such standards don’t now exist.

Members of the House panel aimed to address a joint report from FERC and the North American Electric Reliability Corporation following a devastating Texas winter storm in 2021 that also showed how pipelines can fail.

The Colonial Pipeline ransomware attack, when Russian hackers shut down a key pipeline owned by Colonial Pipeline of Alpharetta, Ga., affected a conduit for gasoline to 17 states in the South and East and the District of Columbia. Shortages and panic buying ensued.

“As some recent high-profile events have proven, disruption to our energy supplies has some dire consequences,” Rep. Mike Doyle, (D-Pa.), said. “And the need for reliability is only going to increase as we see more extreme weather events and the proliferation of cyberattacks.”

FERC can enforce reliability standards regarding electricity delivery and other matters, but lacks such authorities when it comes to regulating pipelines.

“Lack of mandatory reliability standards, especially for natural gas pipelines, poses a risk to the reliability of the bulk power system to the interdependency of our nation’s gas electric infrastructure,” FERC Chairman Richard Glick told the panel.

“The topic of this hearing is completely off base, out of touch with the realities facing Americans today,” said Rep. Fred Upton of Michigan, who is the ranking Republican on the subcommittee. “This bill would dramatically expand FERC, transforming a relatively tiny agency into a behemoth with regulatory powers over America’s energy system.”

Rep. Kurt Schrader, a moderate Democrat from Oregon, also appeared skeptical. Schrader asked Glick if reliability problems have increased in recent years, and whether the industry was not doing its due diligence.

When Glick said he didn’t have evidence of either, Schrader said that was important to know before imposing more regulations.

“If we need to change the regulatory framework, it would be, I assume, because we’re having more problems,” Schrader said.

Republicans also said Congress and federal agencies should be focused on lowering the cost of fossil fuels, not expanding the role of FERC.

“Instead of discussing the creation of a new level of bureaucracy for pipelines, we should be fighting the current energy crisis,” Rep. Earl L. “Buddy” Carter, (R-Ga.), said.

“My Democratic colleagues have spent over a year now conducting an all-out assault on reliable and affordable fossil fuels and the infrastructure needed to transport these vital resources to market,” Rep. Bill Johnson, (R-Ohio), said.

But he attributed the price hikes to the general disruptions in the economy caused by the pandemic, not — as Republicans alleged — because of the administration’s energy policies.

“Prices are too high right now,” Turk said. “COVID has thrown the supply and demand for oil and gas out of whack and we’re suffering from — we’ve got a near-term problem. It’s not caused by pipelines or other things. It’s caused by COVID and we’re trying to deal with that.”

Reliability of the electric grid is related to energy costs, Rep. Diana DeGette, (D-Colo.), and Glick said. Prices spike during outages, they said, including during the Texas winter storm. A more reliable grid would provide more stable pricing, they said.

Biden cancelled the XL Keystone pipeline that was planned to transport crude oil from Canada to a connection in Nebraska.

Upton and Ohio Republican Bob Latta asked about the Line 5 pipeline, an oil transport system that traverses Michigan and Wisconsin. Michigan has sued the line’s operator, Canadian energy company Enbridge, to halt operations because of danger of leaking in the Straits of Mackinac.

Turk told Latta he had not been involved in discussions over a potential closure of the line.

A U.S. House panel broke along party lines Tuesday as its members debated mining near the most popular wilderness area in the country, following President Joe Biden’s decision earlier this year to block federal approval of a new mine. Democrats on the House Natural Resources Energy and Mineral Resources Subcommittee said they supported Minnesota U.S. […] The post Proposal to ban mining near Minnesota’s Boundary Waters sets off battle in Congress appeared first on Minnesota Reformer.
MINNESOTA STATE・9 HOURS AGO
Minnesota Reformer

Jaleel Stallings, an Army veteran who was acquitted on the grounds of self-defense after he was charged with shooting at Minneapolis police, has agreed to settle a civil lawsuit against the city for $1.5 million plus costs and attorneys’ fees.  The post Minneapolis to pay Jaleel Stallings $1.5 million appeared first on Minnesota Reformer.
7 DAYS AGO
Minnesota Reformer

Colorado Governor Jared Polis cited the "impacts of inflation and the cost of living" as reasons for the tax rebate program.
COLORADO STATE・29 DAYS AGO

The Centers for Disease Control and Protection announced in April that the Title 42 would be rescinded on May 23.
LOUISIANA STATE・29 DAYS AGO
Newsweek

Florida Republicans have compared a protest against a newly drawn congressional map that dilutes Black voter strength in the state to the violent attempt to overturn the results of the 2020 presidential election on 6 January, 2021.On 21 April, a small group of mostly Black Democratic legislators staged a sit-in protest in the middle of the House floor, singing and praying and briefly delaying votes during a special legislation convened by Republican Governor Ron DeSantis, whose map eliminates two of the state’s four districts represented by Black Democrats and creates four more districts that lean Republican.State Rep Randy Fine...
PROTESTS・29 DAYS AGO
GOBankingRates

May is almost here, and millions of households are looking forward to their next SNAP payments. See: Surprising Things You Can Buy With Food StampsFind: SNAP 2022 -- Is My State Giving Out Extra Money...
AGRICULTURE・3 DAYS AGO
Salon

Rep. Marjorie Taylor Greene (R-GA) speaks to supporters of former U.S. President Donald Trump at the Banks County Dragway on March 26, 2022 in Commerce, Georgia. This event is a part of Trump's Save America Tour around the United States. (Megan Varner/Getty Images) On Monday, CNN's Andrew Kaczynski and Em...
COMMERCE, GA・28 DAYS AGO
Newsweek

Biden pledges more support for farmers, ‘the backbone of freedom’

At an Illinois farm on Wednesday, President Joe Biden announced federal assistance to alleviate costs for farmers and consumers and ensure there is enough food to meet world demand as Russia’s war in Ukraine continues. Biden said he will double the recently announced federal funding to boost domestic fertilizer production. He also pledged to extend […] The post Biden pledges more support for farmers, ‘the backbone of freedom’ appeared first on Minnesota Reformer.
KANKAKEE, IL・13 DAYS AGO
Minnesota Reformer

The record profits for meatpackers in the past two years were the result of market conditions during the coronavirus pandemic, along with increased consumer demand, according to leaders of the country’s four large meatpacking companies. The meatpacking executives defended their business practices during a lengthy congressional committee hearing on Wednesday. U.S. Rep. David Scott, D-Georgia, […] The post Meatpackers deny price fixing for beef appeared first on Minnesota Reformer.
CONGRESS & COURTS・27 DAYS AGO
Minnesota Reformer

Disregard for essential workers will hurt us all | Opinion

On April 29, the Legislature agreed to spend $2.7 billion of the state’s $9.2 billion surplus to replenish the unemployment insurance trust fund rather than having businesses pay higher tax rates to refill it themselves, as normally required by law. The move, which will generate considerable savings for businesses following one of the most profitable […] The post Disregard for essential workers will hurt us all | Opinion appeared first on Minnesota Reformer.
ROBBINSDALE, MN・7 DAYS AGO

For all the “pro-life” bluster, GOP shows indifference to human life | Column

In the hours after the bombshell leak of U.S. Supreme Court Justice Samuel Alito’s draft opinion toppling Roe v. Wade, I awaited the torrent of Republican-authored press releases vowing to provide every resource the federal government could muster to support the millions of new families they were going to usher into existence. Of course, that didn’t happen. […] The post For all the “pro-life” bluster, GOP shows indifference to human life | Column appeared first on Minnesota Reformer.
CONGRESS & COURTS・20 DAYS AGO
Minnesota Reformer

Minnesota homeowners hurt financially by the pandemic can now apply for up to $35,000 in assistance for mortgage payments and other housing-related expenses through a new state program called HomeHelpMN. The program is funded with $109 million from the federal government through the American Rescue Plan Act of 2021. Minnesota Housing Commissioner Jennifer Ho announced […] The post Minnesota launches pandemic assistance fund for homeowners appeared first on Minnesota Reformer.
MINNESOTA STATE・7 DAYS AGO
Minnesota Reformer

WASHINGTON — The Biden administration hopes that a new push to get a Covid antiviral into more pharmacies, along with getting the message through to doctors that it’s no longer in short supply, will help reduce hospitalizations. The plan to ship out more of the antiviral comes as Congress returns from a recess this week […] The post White House pushes COVID antiviral amid funding stalemate with Congress appeared first on Minnesota Reformer.
POTUS・28 DAYS AGO
Minnesota Reformer

On April 22, Mayor Melvin Carter issued a proclamation urging the public to consume more plant-based foods in place of animal products. Promoting plant-rich eating could be a key factor in achieving the city’s goal of achieving carbon neutrality in city operations by 2030 and citywide by 2050. “We join communities across our nation and […] The post Eat more plants and fewer animals | Opinion appeared first on Minnesota Reformer.
MINNESOTA STATE・22 DAYS AGO

The Minnesota Reformer is an independent, nonprofit news organization dedicated to keeping Minnesotans informed and unearthing stories other outlets can’t or won’t tell. We’re in the halls of government tracking what elected officials are up to — and monitoring the powerful forces trying to influence them. But we’re also on the streets, at the bars and parks, on farms and in warehouses, telling you stories of the people being affected by the actions of government and big business. Minnesota Reformer is part of States Newsroom, a national 501(c)(3) nonprofit supported by grants and a coalition of donors and readers. Minnesota Reformer retains editorial independence.