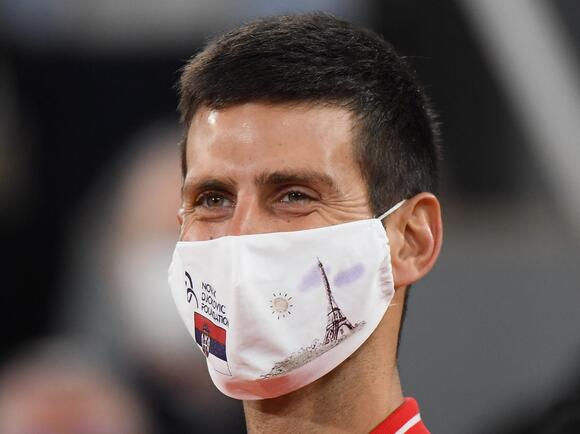 Novak Djokovic , the world number one tennis star whose opposition to vaccination saw him deported from Australia last week, is the controlling shareholder of a biotechnology firm that is developing a COVID-19 treatment that doesn't involve vaccines.

The tennis star, who was removed from Australia on Sunday amid a dispute over a medical exemption relating to him being unvaccinated, bought an 80% stake in QuantBioRes in 2020, company records show.

QuantBioRes CEO Ivan Loncarevic told Reuters that Djokovic bought the stake in June 2020, but declined to say how much he paid. According to the Danish company register, Djokovic and his wife Jelena own 40.8% and 39.2% of the company respectively.

Loncarevic told Reuters that the Danish firm is "developing a peptide which inhibits the coronavirus from infecting the human cell" and that clinical trials are expected to start this summer.

The company's website says it started developing a "deactivation mechanism" for COVID-19 in July 2020.

Little more is publicly known about what the treatment will involve.

Djokovic's representatives did not immediately reply to Insider's request for comment.

In 2020, before COVID-19 vaccines were available, April 2020, Djokovic said he was "opposed to vaccination" but that he was "no expert" and would keep an "open mind."

The 34-year-old had not publicly shared his vaccination status until earlier this month when he revealed he had been granted a medical exemption to play in the Australian Open without one.

Upon flying to Melbourne, however, his visa was revoked after the Australian Border Force deemed his recent COVID-19 infection not to be sufficient for his exemption.

The Serbian subsequently spent four days awaiting deportation in an immigration detention center before his visa was reinstated by a judge.

But days later, his visa was then revoked for a second time after it emerged he had provided false information about his whereabouts before entering the country.

He also admitted to attending a media event in his native Belgrade in December just days after testing positive for COVID-19.

Australia's Home Affairs Minister Karen Andrews said on Sunday that Djokovic would subsequently be banned from entering Australia for three years as a result of his deportation, meaning he may not be able to play in the Australian Open until 2025.

On Monday, France's Sports Ministry deepened Djokovic's problems by saying that he could also be barred from competing in the French Open later this year after the country passed a new vaccine pass law that will require people to have a certificate of vaccination to enter public places such as restaurants, cafes, cinemas, and long-distance trains.

"The rule is simple. The vaccine pass will be imposed, as soon as the law is promulgated, in establishments that were already subject to the health pass," the ministry said.

"This will apply to everyone who is a spectator or a professional sportsperson."

A top US official in the Pacific has warned that America would have to “respond” if the Solomon Islands allows China to establish a military base there.Following a “constructive and candid” 90-minute meeting with prime minister Manasseh Sogavare, ambassador Daniel Kritenbrink said that the security deals between China and the Solomon Islands present “potential regional security implications” for the US and other allies.“We wanted to outline for our friends in the Solomons what our concerns are,” Mr Kritenbrink, US assistant secretary for East Asian and Pacific Affairs, told reporters.“We have respect for the Solomon Islands’ sovereignty. But we also...
FOREIGN POLICY・26 DAYS AGO
dailyhodl.com

Silk Road founder Ross Ulbricht is forfeiting billions of dollars worth of Bitcoin (BTC) and other crypto assets to the US government. According to a new court filing, Ulbricht will relinquish any claim to over 69,000 BTC and undisclosed amounts of Bitcoin Gold (BTG), Bitcoin SV (BSV) and Bitcoin Cash (BCH) worth a combined $3 billion as part of a settlement.
PUBLIC SAFETY・27 DAYS AGO
The US Sun

MILLIONS of Brits have been urged to take up a rapid test to see if they have bowel cancer. The Health Secretary has called on men over 60 to make sure they have the life-saving checkups. It couldn't be easier - with a home testing kit on offer, or use...
CANCER・27 DAYS AGO
Daily Mail

Walking at a brisk pace for just 75 minutes every week could cut your risk of depression, a new study finds. The World Health Organization recommends everyone should exercise for at least two-and-a-half hours every seven days. But researchers at Cambridge University, England, found adults who got half as much...
FITNESS・27 DAYS AGO

I took in a Ukrainian refugee to live with my wife and me… then ran off with her after ten days. We’re in love

A DAD of two has run off with a Ukrainian refugee just ten days after he and his partner welcomed her into their home. Security guard Tony Garnett, 29, walked out on Lorna, 28, after falling head over heels for 22-year-old Sofiia Karkadym. Tony, of Bradford, West Yorks, said: “We’re...
WORLD・2 DAYS AGO
Business Insider

The former F-35 test pilot Billie Flynn told The Aviationist that moving to the "cosmic spaceship" that is the F-35 was too much to ask of MiG pilots.
AEROSPACE & DEFENSE・27 DAYS AGO
Newsweek

Indonesia accounts for about half of the world's supply of palm oil — the world's most widely used vegetable oil.
INDUSTRY・27 DAYS AGO

A member of a superyacht crew also told The Times of London that one owner had his bar stools made from whale foreskin.
BOATS & WATERCRAFTS・28 DAYS AGO
Insider

"Conditions today are worse than those experienced in 2007 and 2008," Sara Menker, CEO of agriculture analytics firm Gro Intelligence, told the UN.
INDUSTRY・1 DAY AGO
Fortune

Sign up for the Fortune Features email list so you don’t miss our biggest features, exclusive interviews, and investigations. Shanghai’s 25 million residents have endured an extreme COVID lockdown for nearly a month—and now a new nightmarish topic is trending on Weibo, the country’s Twitter-like social media platform.
PUBLIC HEALTH・27 DAYS AGO
Insider

The world's top hackers are competing to break into a Tesla. The winner gets $600,000 and keeps the car.

Hackers have gathered for the anniversary of the Pwn2Own competition which gives out huge prizes for anyone who can crack into big name technology.
TECHNOLOGY・2 DAYS AGO

Kyle Chalmers cited the toll from “made up story lines” on his mental health for missing the announcement of Australia’s swimming team on Sunday night. He was absent when Dolphins squads for the world titles and Commonwealth Games were named and the swimmers presented pool-side after the national titles in Adelaide.
SPORTS・1 HOUR AGO
Reuters

TOKYO, May 23 (Reuters) - U.S. President Joe Biden, in Japan to launch a regional economic plan to counter China and reaffirm ties with a key Asian ally, began his visit on Monday by meeting with Emperor Naruhito. The cornerstone of Biden's two-day visit, which includes meetings with the leaders...
WORLD・1 HOUR AGO
Insider

Fishwife is a sustainability-minded, US-based tinned fish and seafood company. We spoke with Co-founder Becca Millstein to learn what inspired her, and what's next for the brand.
ECONOMY・2 DAYS AGO
AFP