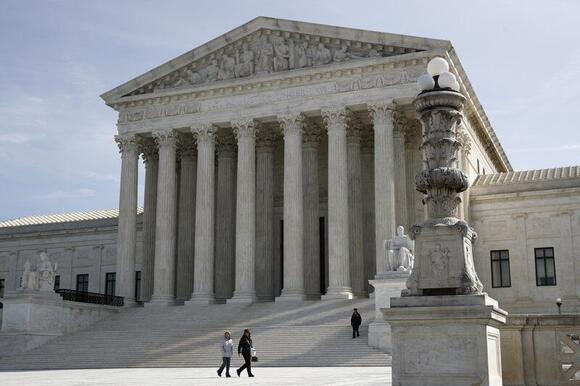 (The Center Square) – The U.S. Supreme Court this week appeared to be sympathetic to arguments made by a petitioner against the city of Boston over its policy that prohibited a private “Christian” flag from being flown in front of City Hall.

Liberty Counsel Founder and Chairman Mat Staver presented oral arguments before the court on Tuesday on behalf of Boston resident Hal Shurleff and his Christian civic organization, Camp Constitution. In Shurtleff v. Boston , he argued that Boston’s policy violated the First Amendment by censoring a private flag in a public forum open to “all applicants” merely because the application referred to it as a “Christian flag.”

The case affects the free speech of everyone, Liberty Counsel argues. If Boston can open a public forum for all applicants and close it to disfavored viewpoints, then every government could then censor viewpoints it doesn’t like under the guise that every private speaker in the forum was engaging in government speech.

“This case will set national precedent and affect the free speech of every person,” Staver said. “We must not give government the power to censor disfavored viewpoints in a public forum.”

The case dates back to 2017 when Shurtleff and Camp Constitution asked the city for a permit to raise its flag on a Boston City Hall flagpole to commemorate Constitution Day and Citizenship Day on Sept. 17.

Camp Constitution offers classes and workshops on American history and the U.S. Constitution. It was formed “to enhance understanding of the country’s Judeo-Christian heritage, the American heritage of courage and ingenuity, the genius of the United States Constitution, and free enterprise,” according to its petition .

Boston official Gregory Rooney told Shurleff he denied the request because the city “maintains a policy and practice of respectfully refraining from flying non-secular flags,” according to the petition.

The policy was created out of concern for “the so-called separation of church and state or the Constitution’s establishment clause,” he said. Camp Constitution’s flag “was promoting a specific religion,” he reasoned, which he didn’t think “was in the city’s best interest to necessarily have that flag flying above City Hall.”

For 12 years from 2005 to 2017, Boston approved 284 flag-raisings by private organizations with no denials on the flagpoles that it designated as a “public forum,” Liberty Counsel argues.

“The flag itself was not the problem. Had it been called anything but Christian, the same flag would have flown for an hour without incident,” Staver told the justices in his oral arguments. “All applicants are welcome, except religious viewpoints.” Boston’s policy “places religion in the same category as speech deemed inappropriate, offensive, supporting prejudice or discrimination,” he said.

The city’s application form alone “cannot transform private speech into government speech,” Staver added. The lower court’s decision “upholding viewpoint discrimination under the guise of government speech is dangerous and should be reversed.”

Chief Justice John Roberts asked Staver if the flagpole is “a government forum and this is government speech, they can certainly discriminate on the basis of viewpoint, right?”

Staver replied it would be correct “if it’s government speech … but this is not government speech. The city exercised no control. For 12 years, the city ministerially approved all of these applications with virtually no review.”

Justice Stephen Breyer said that “anybody in his right mind” who saw a flag flying outside of a city hall building “would think it does have something to do with the city.”

Justice Sonia Sotomayor added that “to an ordinary observer walking past City Hall, if you see a flag on the pole, you think it’s City Hall speaking.”

When asked by Justice Neil Gorsuch if Boston could limit the use of the flagpole “with the purpose of discriminating against religious viewpoints,” Department of Justice lawyer Sopan Joshi said it couldn’t because the Supreme Court has ruled “that even in a non-public forum, viewpoint discrimination is impermissible.”

Justices appeared to take issue with statements made by Boston’s attorney, Douglas Hallward-Driemeier. At one point, he told the justices “Private parties are free to wave their flags on City Hall Plaza or even raise a temporary flagpole there, but they cannot commandeer the city’s flagpole to send a message the city does not endorse.”

After grilling him for a few minutes, Justice Samuel Alito said, “You did some after-the-fact gerrymandering of your policy and reverse engineered it.”

In another statement, Hallward-Driemeier claimed the city’s goal was “to foster diversity of communities” and “commemorate events or occasions.”

But Justice Clarence Thomas said if Christians weren’t part of this diversity, the city’s policy was “limited diversity.”

Staver argues the case “is so much more significant than a flag. Boston cheated when it opened the flagpoles to all applicants and then excluded Christian viewpoints. The city then claimed that the flagpoles never were a public forum despite its history and expressed policy. The city’s censorship is clearly unconstitutional, and government cannot censor religious viewpoints.”