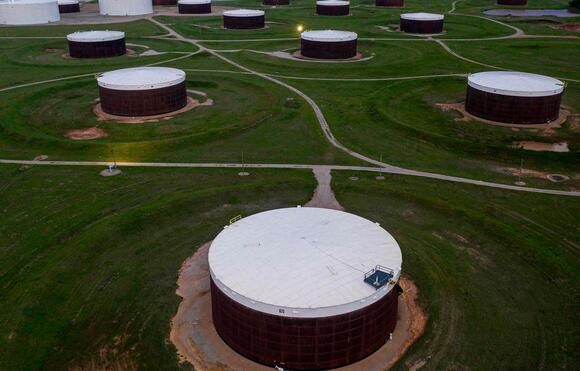 Oil futures settled with a modest loss on Thursday, easing back from their highest levels since 2014, following an unexpected weekly rise in U.S. crude supplies, but geopolitical risks to global supplies helped to limit price losses.

Crude-oil supplies had a surprise build, though it was smaller than what was reported by the trade group American Petroleum Institute late Wednesday, and it was “enhanced” by a release from the Strategic Petroleum Reserve, Phil Flynn, senior market analyst at The Price Futures Group, said following the release of the Energy Information Administration report. Stocks in the SPR edged down by 1.4 million barrels, the EIA data showed.

The government agency reported on Thursday that U.S. crude inventories, excluding the SPR, climbed by 500,000 barrels for the week ended Jan. 14.

On average, analysts had forecast a fall of 700,000 barrels, according to a poll conducted by S&P Global Platts. The American Petroleum Institute on Wednesday reported a 1.4 million-barrel climb, according to sources. Data were delayed by a day this week because of Monday’s Martin Luther King, Jr., holiday.

On Wednesday, WTI and Brent crude both posted their highest finishes since October 2014. Through Thursday, WTI is up 15.5% so far in the new year, while Brent has rallied 13.6%.

“Gasoline inventories did come in higher than expected, but ready-to-use gasoline supplies are still relatively tight,” said Flynn. Gasoline supplies are expected to increase at this time of year, so “that wasn’t a big surprise and if you look at the gasoline demand week over week, it was up modestly from last week’s drop.”

Overall, oil prices “continue to look buoyant, as the predictions for a move towards $100 a barrel in the coming weeks get ever louder,” said Michael Hewson, chief market analyst at CMC Markets UK, in a market update.

“With the U.K. dropping recent COVID restrictions, expectations over demand as we head into the spring have continued to rise, while supply chain constraints serve to limit the downside,” he said.

“If any assembled Russian units move across the Ukrainian border, that is an invasion,” Biden said Thursday ahead of a meeting on infrastructure. “If Putin makes this choice, Russia will pay a heavy price.”

Natural-gas futures extended their recent losses, even after a report from EIA revealed a weekly drop in U.S. supplies of the fuel that was bigger than the five-year average.

“Prices have found selling interest despite continued colder-than-normal weather forecasts, as inventories are still expected to exit winter at healthy levels, due to the strong recovery charted during December,” said Christin Redmond, commodity analyst at Schneider Electric, in a daily note.

Pfizer said Wednesday that it will provide nearly two dozen products, including its top-selling COVID-19 vaccine and treatment, at not-for-profit prices in some of the world’s poorest countries. The drugmaker. PFE,. +1.00%. 0Q1N,. -0.66%. announced the program at the World Economic Forum’s annual gathering in Davos, Switzerland, and said...
MEDICAL & BIOTECH・8 HOURS AGO
Reuters

May 25 (Reuters) - Russia has little to gain from agreeing to a U.N. proposal that it unblock Ukraine's grain exports via the Black Sea in exchange for the freeing of Russian and Belarusian fertiliser exports from Western sanctions, industry experts in Russia say. U.N. Secretary-General Antonio Guterres said last...
INDUSTRY・23 MINUTES AGO

Sign up for the Fortune Features email list so you don’t miss our biggest features, exclusive interviews, and investigations. U.S. tariffs on Chinese imports survived a change in administration, but the trade-war-era levies may not survive record inflation. “We’re certainly looking at where we see costs being raised and,...
PRESIDENTIAL ELECTION・29 DAYS AGO
Newsweek

Here’s what KPMG’s U.S. chief is saying about the market downturn, the economy and M&A

The proverbial tide is going out as technology stocks and other high-growth assets succumb to a bear market with interest rates on the rise. Will it reveal corporate fraud underneath?. Paul Knopp, the chair and chief executive of KPMG U.S., doesn’t necessarily expect so. “In the United States, Sarbanes Oxley...
BUSINESS・7 HOURS AGO

LONDON (AP) — Roman Abramovich’s 19-year ownership of Chelsea is ending after the British government approved the sale of the Premier League club by the sanctioned Russian oligarch to a consortium fronted by Los Angeles Dodgers part-owner Todd Boehly. The government had to be sure that Abramovich, who...
NFL・7 HOURS AGO
MarketWatch

It’s never easy for an executive to witness losing two-thirds of his company’s value in just five months. But Chris Kemp, founder, chair and chief executive of Astra Space. , based in Alameda, California, has a remarkably measured view in what’s been a rocky year for profitless technology companies, and the space sector in particular. Virgin Orbit.
ALAMEDA, CA・8 HOURS AGO