2 Cryptocurrencies to Buy and Hold Forever

The cryptocurrency industry has had better days. After approaching a total market value of $3 trillion in early November, prices have come falling down. Inflation, tightening monetary policy, and the ongoing pandemic have resulted in heightened economic uncertainty and a flight away from risky assets.

Are you questioning whether or not it's a good time to dive into the speculative waters of crypto in the hopes of achieving monster returns? I think it is an opportune time.

Don't be scared away by the recent digital-asset market crash . Here are two cryptocurrencies to buy and hold forever. 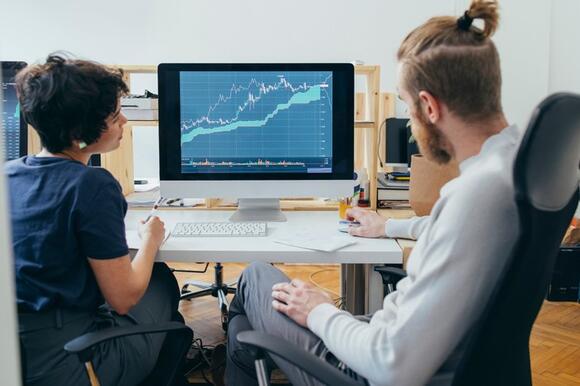 With a total market cap of $812 billion (as of Jan. 16), Bitcoin (CRYPTO: BTC) is the world's most valuable cryptocurrency. Released in 2009 by a pseudonymous developer (or developers) named Satoshi Nakamoto, it's designed to be a decentralized-payments network. Over the past five years, Bitcoin has returned an astronomical 5,100%, easily making it one of the best financial assets to have owned.

Sending money to someone today requires the use of a financial intermediary, like JPMorgan Chase or PayPal , to verify users, process transactions, and settle funds. By eliminating the middleman, Bitcoin's goal is to make this entire process faster, cheaper, and accessible to people who don't have access to basic financial services.

The most common argument for owning Bitcoin is that it will become a digital version of gold. Because gold is scarce, investors hold it to store value. Bitcoin also has a finite supply, as there will only be over 21 million coins in circulation. But unlike physical gold, the digital currency is easier to hold, transfer, and transact with. And as the world is increasingly becoming digital, Bitcoin could be the currency of the internet.

A greater number of institutions are now starting to view Bitcoin as a legitimate asset, which supports its price appreciation. Not only is it receiving approval from hedge-fund managers like Paul Tudor Jones and Stanley Druckenmiller, but corporations like Block , MicroStrategy , and Tesla have allocated a portion of their balance sheets to Bitcoin.

Bitcoin has the longest history of any cryptocurrency, as well as significant mindshare among the finance and tech community. This makes it a worthwhile investment.

The second most valuable cryptocurrency is Ethereum (CRYPTO: ETH) , carrying a market value of $396 billion (as of Jan. 16). Ethereum's aim is to build a platform with features that Bitcoin lacks, such as the ability to incorporate smart-contract functionality on its blockchain. After launching in 2015, it's skyrocketed 111,000%, as developers flock to the platform.

The explosion of decentralized applications (dApps), including decentralized finance protocols and non-fungible tokens (NFTs), benefits Ethereum. Projects like Aave , a lending protocol, and OpenSea, the biggest NFT marketplace, accept Ether, the native token of Ethereum, in order to utilize the service. Therefore, demand for Ether -- and its price -- should climb as more people start interacting with these projects.

Ethereum's biggest issue currently deals with its inability to scale. The network can process about 13 transactions per second (TPS) right now. And with the proliferation of dApps, the network can get congested, causing transaction fees to soar.

Luckily, Ethereum is planning a solution called ETH2, which will change the way transactions are validated to something called a proof-of-stake system, where participating token holders approve transactions to the blockchain. In addition to being more energy efficient, the upgrade, set to launch this year, should help Ethereum scale better.

After Bitcoin, Ethereum is top of mind when people think about cryptocurrencies. Mark Cuban, the Shark Tank investor and billionaire owner of the Dallas Mavericks, is extremely bullish, thinking Ether has a lot of upside. Developers, on the other hand, clearly love building on top of the Ethereum blockchain, paving the way for continued adoption and utility.

Be ready for volatility

Because Bitcoin and Ethereum are fledgling technologies, there's naturally a ton of uncertainty and speculation surrounding them. Even the two most popular coins can fall out of favor with investors at the drop of a hat.

Therefore, if you decide to take the plunge and invest in this emerging asset class, be prepared for the inevitable volatility. This has historically been the case and will continue to be the case for the foreseeable future.

As part of a well-diversified portfolio, however, Bitcoin and Ethereum are the two top cryptocurrencies to buy.

Silk Road founder Ross Ulbricht is forfeiting billions of dollars worth of Bitcoin (BTC) and other crypto assets to the US government. According to a new court filing, Ulbricht will relinquish any claim to over 69,000 BTC and undisclosed amounts of Bitcoin Gold (BTG), Bitcoin SV (BSV) and Bitcoin Cash (BCH) worth a combined $3 billion as part of a settlement.
PUBLIC SAFETY・29 DAYS AGO
The Motley Fool

E-commerce has fallen out of favor with some investors but the long-term opportunity is undeniable.
STOCKS・2 DAYS AGO
The US Sun

Elon Musk, the world’s wealthiest man, who thinks tunnels are immune to natural disasters, is purchasing Twitter. The company confirmed on Monday afternoon that it had accepted the billionaire’s offer. “Twitter, Inc. today announced that it has entered into a definitive agreement to be acquired by an entity wholly owned by Elon Musk, for $54.20 per share in cash in a transaction valued at approximately $44 billion,” reads the official press release. “Upon completion of the transaction, Twitter will become a privately held company.”
BUSINESS・28 DAYS AGO

These stocks have great long-term prospects.
STOCKS・2 DAYS AGO
Inc.com

Jeff Bezos, the founder and former CEO of Amazon, and Elon Musk, the CEO of Tesla and soon-to-be owner of Twitter, don't strike me as best buds. The two men have competed over the past few years for the title of the world's richest man, a title Musk holds. They also sort of compete in space, with Bezos' Blue Origin competing against Musk's SpaceX.
BUSINESS・28 DAYS AGO
The Motley Fool

These stocks are cheap after an unmerciful beatdown.
STOCKS・2 DAYS AGO
The Motley Fool

Want to Score an Extra $400 per Month From Social Security? Here's How.

One move could supercharge your monthly retirement income.
PERSONAL FINANCE・2 DAYS AGO
The Motley Fool

Should You Buy the Dip in This Cathie Wood Favorite?

Robinhood's Q1 earnings were anything but bullish. So why are famous investors pouring capital into the stock?
STOCKS・8 HOURS AGO