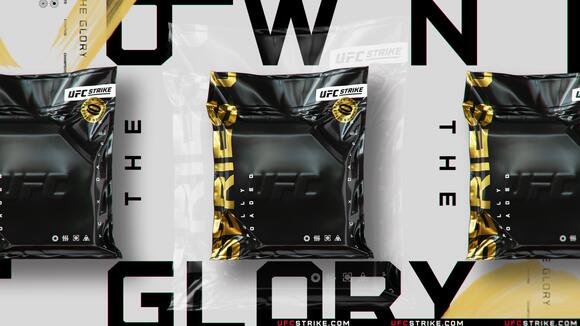 Following UFC 270, UFC Strike will sell 100,000 packs of three digital video moments (for $50 each). The video NFT format has become somewhat familiar since NBA Top Shot’s ascendance last year. But there will be some notable differences this time.

Dapper Labs was able to add broadcast audio to its UFC Strike moments, thanks to UFC’s production control of the company’s events. The collection also features a mixture of men and women fighters—Francis Ngannou, Amanda Nunes, Kamaru Usman, Rose Namajunas, etc.—from launch. There will be a UFC Strike marketplace available at, or soon after, the moments’ debut.

“Our demographics overlap really well with first adopters and tech users… so I think from that perspective, our fans are going to embrace this,” Tracey Bleczinski, UFC’s SVP of global consumer products, said in an interview. “We think this will be a significant revenue stream.”

Bleczinski added that fighters will share in UFC Strike revenues when they are featured in moments. However, their cut won’t be affected by whether they are the ones delivering or taking the encapsulated beating.

UFC Strike will feature recent moments, though Dapper Labs could theoretically go all the way back to UFC 1 as it mines content. “UFC—what they told us was—feel free to do bold things, and so we’re doing that,” Dapper Labs head of partnerships Caty Tedman said.

UFC’s relationship with Dapper Labs stretches back to 2019. The organization was one of the first to sign a deal with then-nascent crypto collectible company, in part because UFC owner Endeavor was an early Dapper backer.

Tedman said Dapper Labs wasn’t set up to manage multiple new, growing products this time last year. But now the company has dedicated teams for each of its sports products, which includes an NFL collectible platform, All Day, currently in closed beta.

While UFC Strike has been in development, the blockchain scene has quickly evolved—and evolved again. Utility has become a common element of NFT releases, and UFC figures to be no different. Whether it comes in the form of digital exclusives or in-person benefits, Bleczinski said UFC is actively discussing future uses, as well as the potential to reward fans with NFTs in certain instances, as the NFL is currently doing .

Click here to read the full article. While private employers can normally demote, suspend or even terminate employees for expressing viewpoints that violate company policy or employment contracts, ESPN anchor Sage Steele maintains her network exceeded its legal authority in regulating her speech. Steele on Thursday sued ESPN Productions Inc. and its parent, Walt Disney Company, for what she portrays as violations of both Connecticut law and her contract and for intentionally and negligently inflicting emotional distress. In a complaint filed in a Connecticut Superior Court, Steele argues ESPN broke the law by effectively demoting her in the aftermath of her...
CONNECTICUT STATE・18 DAYS AGO
Sportico

Highest-Paid Athletes: 25 and Under Led by Allen, Osaka, Mbappe

Click here to read the full article. Professional athletes are earning more than ever, as highlighted by Sportico’s ranking last week of the world’s 100 best-paid stars, who made a combined $4.5 billion over the past 12 months from salaries, prize money and endorsements. Though most likely hit their athletic peak in their 20s, their earnings mountaintop often doesn’t occur until after they hit 30. The average and median age of those on the list is 31, and 33 is the most common age with 13 entries. Global soccer star Neymar, 30, is the youngest in the top 10. But for a...
NFL・14 HOURS AGO
The Independent

Holly Holm will look to prevent Ketlen Vieira from making it two straight wins against former UFC champions when the pair clash in a Fight Night main event this Saturday.Brazilian Vieira (12-2) started her professional MMA career with a 10-fight win streak before going 2-2 in her last four outings, though a victory over Miesha Tate in November ensures she enters this bantamweight meeting with Holm with momentum behind her.Meanwhile, Holm (14-5) is looking to move a step closer to regaining the title at 135lbs, having famously taken it from Ronda Rousey with a head-kick knockout in 2015. Holm, 40,...
UFC・33 MINUTES AGO
The Independent

Joshua Buatsi vs Craig Richards time: When are ring walks for fight this weekend?

Joshua Buatsi and Craig Richards go head to head in a clash of British light-heavyweight contenders this Saturday.Former WBA International champion Richards can also count an Olympic bronze medal and unbeaten record (15-0, 13 knockouts) among his accolades, and the 29-year-old most recently beat Ricards Bolotniks with an 11th-round finish in August.Meanwhile, Richards, 32, stopped Marek Matyja in Round 6 in October to respond to his first ever professional loss in positive fashion.Buatsi and Richards 17-2-1 (10 KOs) will face off in a main-event contest at the O2 Arena in London, and we’ve got you covered with all you need...
COMBAT SPORTS・33 MINUTES AGO