The cryptocurrency sector as a whole has been under pressure in recent months. At the same time, many signs point to digital coins becoming well-respected financial and programming tools. The cryptocurrency winter isn't likely to last much longer in my eyes, which means it's high time to pick up some high-quality coins and tokens while the fire sale lasts.

In particular, I see a bright future for the cross-border payment system Ripple and its XRP (CRYPTO: XRP) token.

XRP prices have fallen 41% since the recent peak in mid-November, outpacing value-store powerhouse Bitcoin and decentralized programming token Ethereum by a wide margin. 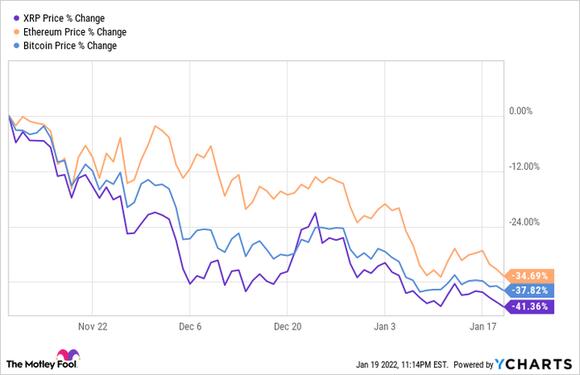 Of course, XRP and the Ripple ecosystem are facing legal challenges that its larger cousins don't have to worry about. At the same time, Ripple enthusiasts will tell you that the outcome of the cryptocurrency's precedent-setting legal showdown will affect every digital coin in the end. Therefore, investors in every corner of the cryptocurrency market should pay attention to what's going on in the case of the Securities and Exchange Commission (SEC) versus Ripple.

That's the big, scary, risky cloud that's been hanging over XRP since December 2020. It's enough to drive a nervous man distracted, and certainly enough to keep cryptocurrency investors on XRP's sideline.

The SEC case hinges on the idea that XRP is a security, much like a stock or a bond, and that Ripple executives broke trading rules when they started selling XRP tokens without registering them with the SEC first. In a perfect world, a value store coin such as Bitcoin might fall under this sort of treatment while utility tokens like XRP and Ethereum would be managed more like fiat currencies.

This split between different cryptocurrency types is essentially on trial here, because the final verdict (after appeals, as necessary) will help American courts and lawmakers set up a long-term legal framework for the digital market. XRP falls somewhere in the gray area between the two extremes, offering a currency-like payment system that can also store value when it's not in transit.

However, the SEC case seems likely to end soon, and most likely in Ripple's favor. If and when that happens, XRP's token prices should spike sharply higher. Popular cryptocurrency exchanges such as Kraken, Binance, and Coinbase Global closed down XRP trades last year in order to avoid the potential for legal issues. The minute these exchanges restart their XRP trades, investors will release more than a year's worth of frustration and pent-up demand. That's on top of the general cryptocurrency market rebound, which should gain traction in 2022. 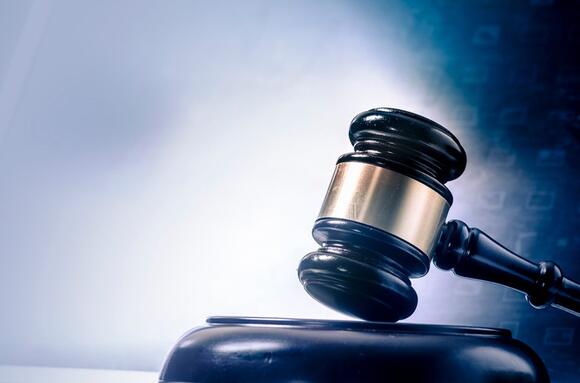 First, Ripple CEO Brad Garlinghouse is aiming for a 2022 conclusion to the SEC drama, and that's his worst-case scenario. Garlinghouse says U.S. Magistrate Judge Sarah Netburn is asking good questions, showing that she understands the complex nature of the cryptocurrency market and that all digital assets should not be treated the same way. In other words, Ripple's CEO expects a reasonably positive outcome, and fairly soon.

In late December, cryptocurrency lawyer Jeremy Hogan tweeted that the SEC vs. Ripple case should end by April. Hogan saw no good reason why the case should be "strung out" over the summer. And Hogan has faith in the legal system, even if its processes run slowly. Here's what he said:

I have been involved in a thousand lawsuits in various U.S. Courts and various areas of law. The Court system is frustrating and lengthy. But what I know is that-IT USUALLY GETS IT RIGHT. Don't give in to cynicism. It will get it right, again.

Meanwhile, the Ripple payments system is finding new real-world use cases around the world. The largest bank in Morocco joined the RippleNet blockchain network on Wednesday, for example. Spanish mega-bank Banco Santander joined the network in the summer of 2020 and has developed its own international payment services based on RippleNet and XRP. You'll also find American household names such as Bank of America and American Express on RippleNet's customer list, though their involvement is on the back burner until the SEC case has run its course.

My point is, XRP has utility value even if Americans aren't allowed to use it -- and even more in a world where domestic banks can use RippleNet to power frictionless international payments. Take that turbo-powered value engine and add it to a widely expected marketwide rebound in 2022, and you get a recipe for exceptional XRP returns.

That's why I expect XRP to beat Bitcoin, Ethereum, and pretty much any cryptocurrency you'd care to name this year. Clarity is coming and that's good news.

10 stocks we like better than Ripple
When our award-winning analyst team has a stock tip, it can pay to listen. After all, the newsletter they have run for over a decade, Motley Fool Stock Advisor , has tripled the market.*

They just revealed what they believe are the ten best stocks for investors to buy right now... and Ripple wasn't one of them! That's right -- they think these 10 stocks are even better buys.

Strong price performance from these three large-cap tokens has investors excited about the near-term prospects of this sector.
STOCKS・16 HOURS AGO
The Motley Fool

Is China set to take over Bitcoin mining once again?
MARKETS・15 HOURS AGO
dailyhodl.com

Silk Road founder Ross Ulbricht is forfeiting billions of dollars worth of Bitcoin (BTC) and other crypto assets to the US government. According to a new court filing, Ulbricht will relinquish any claim to over 69,000 BTC and undisclosed amounts of Bitcoin Gold (BTG), Bitcoin SV (BSV) and Bitcoin Cash (BCH) worth a combined $3 billion as part of a settlement.
PUBLIC SAFETY・25 DAYS AGO
The US Sun

MILLIONS of Americans are set to receive Social Security checks worth up to $1,657 tomorrow. The cash boost will come just 48 hours before Supplemental Security Income payments, worth up to $841, are set to land in around eight million bank accounts on April 29. Seniors with birthdays on the...
BUSINESS・24 DAYS AGO
inputmag.com

Elon Musk, the world’s wealthiest man, who thinks tunnels are immune to natural disasters, is purchasing Twitter. The company confirmed on Monday afternoon that it had accepted the billionaire’s offer. “Twitter, Inc. today announced that it has entered into a definitive agreement to be acquired by an entity wholly owned by Elon Musk, for $54.20 per share in cash in a transaction valued at approximately $44 billion,” reads the official press release. “Upon completion of the transaction, Twitter will become a privately held company.”
BUSINESS・25 DAYS AGO

As part of a lawsuit between shareholders and Elon Musk regarding his “funding secured” tweet, new text messages and emails between Musk and people involved have been released. The communications pretty much confirmed how most people saw the situation: Elon Musk took a meeting with the head of...
BUSINESS・25 DAYS AGO
The Motley Fool

It may not be as scary as homeowners expect.
REAL ESTATE・1 DAY AGO
Inc.com

Jeff Bezos, the founder and former CEO of Amazon, and Elon Musk, the CEO of Tesla and soon-to-be owner of Twitter, don't strike me as best buds. The two men have competed over the past few years for the title of the world's richest man, a title Musk holds. They also sort of compete in space, with Bezos' Blue Origin competing against Musk's SpaceX.
BUSINESS・24 DAYS AGO
The Motley Fool

These stocks offer a reasonable valuation and positive returns in a challenging market.
STOCKS・2 DAYS AGO

This 5%-yielding bank has exposure to emerging markets layered on a strong core in a safe country.
STOCKS・19 HOURS AGO
The Motley Fool

Are you on track to earn the $4,194 max benefit amount?
BUSINESS・2 DAYS AGO
The Motley Fool

You don't want to be caught unprepared.
BUSINESS・1 DAY AGO
The Motley Fool

Secular changes in technology and culture favor some names at the expense of others.
STOCKS・20 HOURS AGO
The Motley Fool