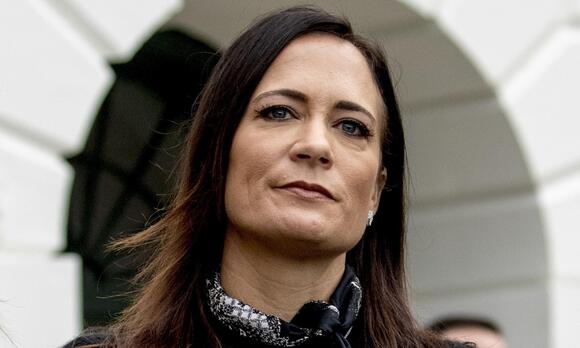 There was a lot of initial excitement around the House select committee tasked with investigating the 6 January attack on the US Capitol securing the cooperation of the former White House press secretary and longtime Donald Trump insider Stephanie Grisham.

According to sources, Grisham has told the committee that in the days leading up to the attack, Trump hosted secret meetings in the White House residence.

The supreme court has rejected Donald Trump’s request for an emergency stay to block the release of White House records to the House select committee tasked with investigating the 6 January attack on the US Capitol – a blow to the former president that could shed significant light on his role in the events of the deadly day.

This order allows the committee to obtain from the national archives more than 700 documents of some of the most sensitive White House records from Trump’s administration, including call logs, daily presidential diaries, handwritten notes and memos from his top aides.

Yesterday Senate Democrats failed again to pass sweeping voter rights protections, as all 50 Republicans in the chamber united in opposition against the measure, as they have done for the past four months.

Stat of the day: US livestock animals produce somewhere between three and 20 times more manure than people produce in the US each year.

US livestock produce between 1.27bn and 1.37bn tons of waste a year, which is partly why devices looking to turn manure into energy sources are catching on – the waste-derived biogas industry appears to be booming; globally, the industry is predicted to reach $126bn by the year 2030, more than doubling over the next decade.

Don’t miss this: a true Marvel

Author Douglas Wolk read all 27,000 of the Marvel comics for his book, All of the Marvels. It was six decades of stories ranging from the well-known Iron Man to the Unbeatable Squirrel Girl, whose superpowers include “proportional speed and strength of a squirrel” – and a knack for creative nonviolent conflict resolution.

An airport in the super-rich enclave in the Hamptons has become a flashpoint in what has been described as “the 2% v the 1%” and “the have-everythings v the have-a-lots” – those who are just wealthy enough to live in East Hampton and those who are so wealthy they can afford to fly in and out.

Climate check: bless the rains down in California

California received more rain from October to December than it did in the previous 12 months – and those heavy rains have allowed for the return of endangered coho salmon for the first time in decades. “We’ve seen fish in places that they haven’t been for almost 25 years,” said Preston Brown, the director of watershed conservation for the Salmon Protection and Watershed Network.

Want more environmental stories delivered to your inbox? Sign up to our new newsletter Down to Earth to get original and essential reporting on the climate crisis every week

Scientists have named a tarantula-killing parasitic worm after famed actor Jeff Daniels, inspired by his role in the 1990s cult classic, Arachnophobia. The Tarantobelus jeffdanielsi inhabit spiders’ mouths and can impact their behavior in strange ways, including causing them to walk on their tiptoes. “In Hollywood, you haven’t really made it until you’ve been recognized by those in the field of parasitology,” Daniels said of this honor.

First Thing is delivered to thousands of inboxes every weekday. If you’re not already signed up, subscribe now .

If you have any questions or comments about any of our newsletters please email newsletters@theguardian.com

I bet Trump is furious with the Supreme Court. It will soon be public knowledge, about the extent of his involvement with the insurrection. If he didn't do anything wrong, then he has nothing to be concerned about.....if he did, he may not be president ever again. All of us will soon find out.

What a disgusting human being and this is who 1/2 of Americans want to lead this country, this is not who we are, wake up America 🇺🇸

The “great replacement theory” can be traced back at least to Theodore G Bilbo, the brazenly racist US senator who held office from 1935 to 1947. Bilbo, an antisemite who acknowledged being a member of the Ku Klux Klan during an appearance on Meet the Press, warned that at “the present rate of interbreeding and miscegenation and intermarriage between the [N-words] and the whites … there’ll be no whites, there’ll be no Blacks in this country. We’ll all be yellow [or brown]”.
CONGRESS & COURTS・2 DAYS AGO
The Guardian

Vladimir Putin's hand appears to tremble before he greets another man, which has sparked further concern over the Russian leader's health.
WORLD・25 DAYS AGO

Fox News host Lisa Kennedy said on Monday that U.S. lawmakers "should not have the government involved in education at all," suggesting that America should rid itself of the public school system entirely. Kennedy's remarks came during Monday's segment of "Outnumbered" in which Kennedy was facilitating a discussion around the...
CONGRESS & COURTS・23 DAYS AGO
Fox News

The Kremlin has refused to acknowledge its death toll in Ukraine, though a spokesperson admitted that Russia suffered "significant losses."
MILITARY・24 DAYS AGO
The Guardian

After a century of attempts by Black activists and lawmakers, President Joe Biden signed the Emmett Till Anti-Lynching Act on the White House lawn, surrounded by Black politicians, clergy, and nonprofit leaders. The new federal law makes lynching a hate crime. Representative Bobby Rush, the bill’s sponsor in the House of Representatives, called the moment “a day of enormous consequence for our nation.” But I had questions. Doubts really. Do white supremacists kill Black people because we did not have a federal anti-lynching law? If not, then does Congress think that such a law will be a deterrent? Will federal prosecutors listen to Black families who say their children were lynched – or to police and coroners who call suspicious deaths “suicides”? Will this law punish civilians for violence but reward them if they join police departments?
SOCIETY・2 DAYS AGO
americanmilitarynews.com

A 60-year-old man who has been charged in the January 6 insurrection at the Capitol has been identified as the son of a fames American artist. Vincent Gillespie, who has been in a legal battle against his stepmother to gain control of paintings by his father, Gregory Gillespie, was arrested in February on charges relating to the Capitol riot.
ATHOL, MA・23 DAYS AGO
Newsweek

A Ukrainian official said that an explosive charge detonated under a train car carrying Russian personnel in the occupied city of Melitopol.
MILITARY・1 DAY AGO
Business Insider

Individual judges may not like the policy choices of the Biden administration, but it is not their job to weigh in on that policy debate.
TEXAS STATE・24 DAYS AGO