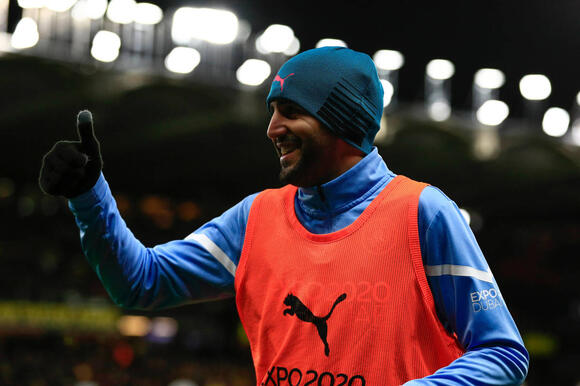 Mahrez has been in sensational form for the Premier League champions since the start of the campaign, with the former Leicester City star often coming up with the goods in front of goal in the absence of a natural striker in the first-team ranks at the Etihad Stadium.

The 30-year-old, who has bagged 13 goals and five assists in 25 appearances across all competitions since August, has been away with the Algeria National Team for the Africa Cup of Nations for the past two weeks, having missed Manchester City's recent wins over Swindon Town and Chelsea.

However, things haven't gone as planned for the reigning Africa Cup of Nations champions, who have claimed just one point from their opening two group-stage ties and are yet to find the back of the net ahead of a must-win clash against Ivory Coast on Thursday.

“I do not want to lose and go home. I believe in qualification. I cannot tell you that we will win, but I guarantee you that we will do everything for it," said the Algeria skipper ahead of the game, as quoted by African Football.

“It will be an open game with two teams wanting to win, (I am) hoping we win. I am confident and hope to stay here (at the Africa Cup of Nations) longer.”

Algeria's fate will also depend on how proceedings unravel in the upcoming meeting between Sierra Leone and Equatorial Guinea in their group, which means luck will play its part if the defending champions are to surrender their crown and seal a premature exit.

Manchester City will hope to continue their incredible winning streak in the Premier League when they travel down south to face Southampton at St. Mary's on Saturday afternoon, as the Sky Blues look to further strengthen their footing in the title race.

Brighton defender Marc Cucurella has spoken about his future at the Amex Stadium amid interest from Manchester City, Chelsea and Tottenham ahead of the summer transfer window.
PREMIER LEAGUE・2 DAYS AGO
CityXtra

Aymeric Laporte has confirmed his absence from Spain's upcoming Nations League matches in a statement via social media, after picking up a knee injury.
PREMIER LEAGUE・1 DAY AGO
CityXtra

Manchester City are reportedly 'willing' to send youth product James McAtee on loan next season, with clubs such as Swansea City and Huddersfield Town interested in signing him on a temporary basis.
PREMIER LEAGUE・2 DAYS AGO
CityXtra

Gabriel Jesus has reportedly told friends that he is 'eager' to link up with Mikel Arteta once again at Arsenal and become the main striker at the Emirates Stadium.
PREMIER LEAGUE・1 DAY AGO

Manchester City have paid an extra £1.3 million to ensure Julian Alvarez's loan deal with River Plate is terminated in time for the forward to join the Premier League champions for pre-season ahead of the upcoming campaign.
PREMIER LEAGUE・1 DAY AGO
CityXtra

Riyad Mahrez will not participate in Algeria's upcoming AFCON qualifiers after being deemed unfit for international duty by Manchester City following their Premier League title triumph at the weekend.
PREMIER LEAGUE・2 HOURS AGO

Manchester City midfielder Ilkay Gundogan has revealed he will soon hold talks with the club over his future as he enters the final year of his contract at the Etihad Stadium.
PREMIER LEAGUE・6 HOURS AGO
CityXtra

Ferran Soriano has compared Manchester City's major investment to Manchester United's in recent years, who have failed to taste the same success despite their flamboyant spending habits.
PREMIER LEAGUE・2 DAYS AGO
CityXtra

Erling Haaland has jetted off once again this week, after completing his various media duties with his new club, ahead of his official arrival at Manchester City on July 1st.
PREMIER LEAGUE・22 HOURS AGO
CityXtra

Southampton Considering Moves For Up To FOUR Manchester City Players

Premier League side Southampton are reportedly holding a level of interest in a number of Manchester City's rising academy talents, with a view to potentially making loan moves for one or more of the names in question.
SOUTHAMPTON, NY・8 HOURS AGO

Manchester City will not stand in Oleksandr Zinchenko's way should he desire an exit this summer, according to a new report.
PREMIER LEAGUE・7 HOURS AGO
CityXtra

A recent report from France has stated that current Manchester City manager Pep Guardiola is now the 'dream coach' of one European giant, when his spell at the Etihad Stadium eventually comes to an end.
PREMIER LEAGUE・2 DAYS AGO
CityXtra

"I Say, Bye-Bye, Hug, and Leave" - Pep Guardiola Reveals Why He Would Leave Manchester City in the Future

Pep Guardiola was asked why he has stayed for Manchester City for a longer period of time than any other club in his career, and in what circumstances would he bid farewell to the Sky Blues.
PREMIER LEAGUE・2 DAYS AGO