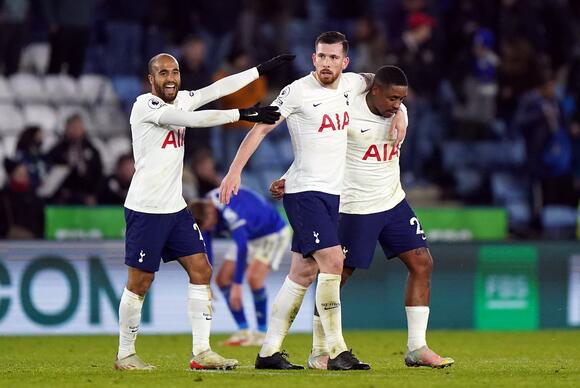 Steven Bergwijn was delighted to follow Antonio Conte ’s instructions and deliver a dramatic stoppage-time win for Tottenham at Leicester.

The Netherlands international scored twice in 79 seconds of time added on to turn Spurs’ 2-1 deficit into a memorable 3-2 victory.

He was sent on in the 78th minute, two minutes after James Maddison had put the Foxes on course for the three points in their first Premier League game of 2022 with a clear instruction from Conte – to score.

Bergwijn, who has been subject of a bid from Ajax in the January transfer window, duly obliged, firing home from close range in the fifth minute of added time and then sparking mad scenes of celebration by rounding Kasper Schmeichel and finding the bottom corner straight from kick-off.

Asked what Conte told him before he went on, Bergwijn explained: “He said, ‘Score and create some difficult moments for the defenders and stay close to Harry’ (Kane) and I did it.

“This is football, this is why we love football, it was a difficult game. It is fantastic, it was a fantastic game, I scored two goals so I am happy.”

Conte has described Bergwijn as an “important” part of his squad even though he has endured a frustrating season.

His appearance at the King Power Stadium was his first since picking up an injury on Boxing Day.

“You want to play and you get out of the rhythm, training is different to the game. It is what it is,” Bergwijn added.

“It has been a difficult season with injuries, we have H (Kane), Sonny (Son Heung-min) and Lucas (Moura) as well. I need to work and when I come on I need to show myself and the manager.”

Leicester were minutes away from kicking off their Premier League campaign in 2022 in style, having not played in the league since December 28.

This is football, this is why we love football, it was a difficult game. It is fantastic, it was a fantastic game, I scored two goals so I am happy

The Foxes were still without several players through injury and are particularly low on numbers in defence.

But boss Brendan Rodgers thinks it will be difficult to sign anyone this month.

“It’s going to be really tough for us, the possibility for us to get someone in on loan,” Rodgers said. “There’s not so many options that are out there.

Government sources believe the bid to push Chelsea’s sale through on Tuesday night could “go down to the wire”.Downing Street officials are understood to be hopeful of imminently issuing the new licence for Todd Boehly to complete his £4.25billion Chelsea takeover.Those involved in the sale at Whitehall want to sign it off before end of play on Tuesday, to ensure the club can meet all deadlines for registration for next season’s competitions.The Premier League confirmed Boehly and his consortium partners have passed the organisation’s owners’ and directors’ tests and that just leaves Government ratification as the final takeover step.“We now...
PREMIER LEAGUE・5 HOURS AGO