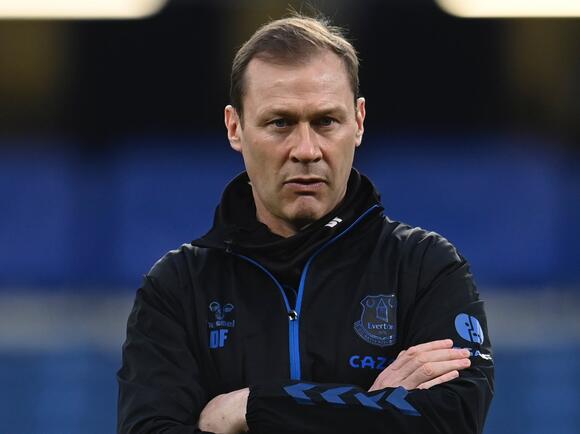 Caretaker manager Duncan Ferguson will demand Everton players “run themselves into the ground” after dishing out a few “home truths” following the sacking of Rafael Benitez.

The Toffees now sit just six points above the relegation zone, with former Liverpool boss Benitez paying the price for the poor run of form and Ferguson taking charge for the club’s “upcoming games”, starting with Saturday’s visit of Aston Villa.

It is Ferguson’s second spell as caretaker boss after taking charge of three games during December 2019 following the dismissal of manager Marco Silva and the combative former Everton striker has made his intentions clear.

“The players have always worked hard but I am pushing them as hard as I possibly can, then they will feel great coming off the training pitch, as we all do when we put in a good day’s work,” Ferguson told evertontv.

“They are upbeat sessions, with hard work and clear and simple messages. I am getting among the players and telling a few home truths because the past has not been good enough.

“But it is in the past. We move forwards, the game is coming and let’s get ready for it. They [Everton players] should give everything. They should run themselves into the ground.

“They should roll up their sleeves and fight for the club in every single game. Imagine if you asked a fan to put a shirt on and get on the pitch, what would they do? Well they need to do that.

“I have confidence in the players and the team and think they can win every game and that will be no different on Saturday. We have a lot of great players in there and they will step up, I am sure.”

Ferguson’s first stint in caretaker charge began with a 3-1 win over Chelsea at Goodison Park and the 50-year-old Scot has called on the club’s fans to recreate a similar atmosphere against a Villa side managed by former Liverpool midfielder Steven Gerrard.

They should roll up their sleeves and fight for the club in every single game. Imagine if you asked a fan to put a shirt on and get on the pitch, what would they do? Well they need to do that

“I feel very honoured the club turned to me again. I have spoken to the owner and chairman and they have been very supportive.

“And we are all willing for us to get a result on Saturday. It is a difficult time, results have been really poor, to be honest.

“It was an electric atmosphere [against Chelsea], one of the best I’ve experienced at Goodison, and I am sure they [the supporters] will be well, well up for it this weekend.

“We really need them to push us across the line for the whole game.”

It has been reported that Wayne Rooney – the former Everton forward currently managing Derby – and ex-Chelsea boss Frank Lampard are set to be interviewed for the full-time job.

Ferguson said he is happy with his caretaker role, adding: “I’ll only be in charge for the upcoming games. The club are in a process of going through their candidates.

“They will go through that process and I am sure they will get the best man for the job.”

Is Nottingham Forest vs Sheffield United on TV tonight? Kick-off time, channel and how to watch Championship play-off semi-final

Sheffield United will aim to overturn a 2-1 deficit when they travel to Nottingham Forest in the second leg of their Championship play-off semi-final on Tuesday evening.In the first leg at Bramall Lane on Saturday, Jack Colback and Brennan Johnson found the net for Forest to put the Blades on the back foot, although Sander Berge’s injury-time goal at least gives them hope as they head to the City Ground.Paul Heckingbottom’s troops will have to overcome the weight of history if they are to book a place at Wembley, with Derby in 2019 the only team to ever lose the...
PREMIER LEAGUE・3 HOURS AGO
The Independent

Wayne Rooney is expected to enter the witness box as the “Wagatha Christie” libel trial starts to draw to a close.In a viral social media post in October 2019, Coleen Rooney, 36, said she had carried out a “sting operation” and accused Rebekah Vardy, 40, of leaking “false stories” about her private life to the press.Mrs Vardy, who is married to Leicester City striker Jamie Vardy, denies leaking stories to the media and is suing her fellow footballer’s wife for libel, while Mrs Rooney is defending the claim on the basis her post was “substantially true”.Mr Rooney, a former England...
SPORTS・2 HOURS AGO
The Independent

Southampton vs Liverpool prediction: How will Premier League fixture play out tonight?

With the two cups in the bag already, Liverpool will attempt to keep their hopes of a domestic clean sweep alive when they head to Southampton on Tuesday night.The Reds must beat Saints and hope they win, and Manchester City do not, on the final day of the season at the weekend.However, even as much importance as this game therefore has, Jurgen Klopp may opt to rotate his team given the demands of going to extra time and penalties at Wembley just three days prior - and with the Champions League final also on the horizon.Southampton’s season has petered out...
PREMIER LEAGUE・2 HOURS AGO
The Independent

Rebekah Vardy trial - live: Wayne Rooney to take to the stand with Jamie Vardy in court for first time

Rebekah Vardy’s husband Jamie has arrived at the high court in London as Wayne Rooney is expected to testify in the Wagatha Christie Case.Today marks day six of Ms Vardy’s libel trial against Coleen Rooney, the wife of the former England international and Derby County manager.Mr Rooney, England’s top goalscorer, has so far kept a low profile in the battle between the two footballer’s wives. Mr Vardy plays for Leicester City and has also represented the national side.He has turned up to court to support his wife every day but has not made any comment or gestures that might...
CELEBRITIES・1 HOUR AGO

Liverpool manager Jurgen Klopp expects to have to make a number of changes for his side’s crucial Premier League trip to Southampton on Tuesday.The FA Cup winners are back in action on the south coast just three days after Saturday’s draining success over Chelsea on penalties at Wembley.Key pair Mohamed Salah and Virgil Van Dijk were both forced off with injuries during the weekend showpiece and Andy Robertson, who withdrew with cramp, may not be risked.Liverpool realistically need to win to retain any hope of pipping Manchester City to the title but Klopp may be wary of the workload on...
PREMIER LEAGUE・3 HOURS AGO
The Independent

What the papers sayA new suitor has emerged for Robert Lewandowski, with The Guardian reporting Chelsea may enter the race for the Bayern Munich striker. The 33-year-old, whose contract with Bayern expires in 2023, could be on the move this summer, with Barcelona the current frontrunner for his signature. However, the paper says Chelsea manager Thomas Tuchel is a huge admirer of Lewandowski and the club are closely monitoring his situation.Manchester City have given Ilkay Gundogan the go-ahead to seek his fortunes elsewhere in the summer, according to the Daily Mail. The 31-year-old Germany midfielder has just one year left...
PREMIER LEAGUE・3 HOURS AGO
The Independent

Gary Lineker believes Jake Daniels will be “massively accepted” in football after coming out as gay.The Blackpool forward released a statement via his club on Monday afternoon, making him the first Briton in the men’s professional game to come out publicly as gay since Justin Fashanu in 1990, while also becoming the only openly gay male professional footballer currently active.Daniels’ move received widespread praise, with players, clubs and organisations from across the country and beyond saluting his courage.“I think he will be massively accepted,” Lineker told BBC Sport. “Not just in his own dressing room but players he plays...
SOCIETY・1 HOUR AGO