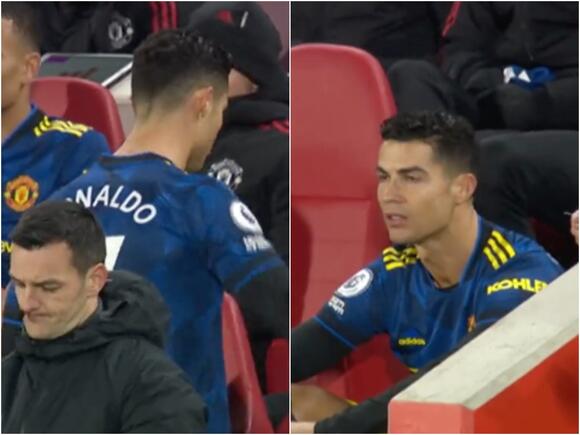 Cristiano Ronaldo reacted angrily to being substituted during Manchester United's victory over Brentford at Old Trafford on Wednesday night.

The 36-year-old was dragged off in the 71st minute to be replaced by defender Harry Maguire as the team looked to defend a 2-0 lead on the night.

Ronaldo, it's safe to say, did not take his substitution well.

As he the left the field, he could be seen angrily muttering to himself. He then threw his coat to the ground before sulkily sitting on a step next to the team's bench.

"I told him we were 2-0 up and we have to learn lessons from Villa Park," the German told BBC Sport. "After that game, I was angry with myself for not changing to a back five."

On Saturday, United was leading Aston Villa 2-0 with less than 15 minutes to play, but was pegged back thanks to two late goals from Jacob Ramsey and Philippe Coutinho.

"Today was exactly the same situation and I did not want to make the same mistake again," continued Rangnick. "I said: 'Listen Cristiano, you are 36 and in great shape, but when you are a head coach, you will see it through the glasses of a head coach.'

"My job is to take the decisions in the best interest of the team and the club and I hope he sees it the same way."

Regardless of how Rangnick saw Ronaldo's reaction, it was still an unnecessary distraction on what was an otherwise positive night for United.

After absorbing pressure from Brentford for much of the first half, United went ahead just after the break when midfielder Fred set up teenager Anthony Elanga for his first goal of the season.

Ronaldo was integral in United's second goal just minutes later, playing Bruno Fernandes through on goal, who then teed up Mason Greenwood for an easy finish.

Marcus Rashford sealed the three points for United before Ivan Toney hit a late consolation for the visitor.

"The first half we were not good in almost all aspects of the game – sloppy passing, not strong enough in the 50/50 situations, and we gave away almost every second ball," Rangnick told United's website.

"In the second half, we were more urgent, we were attacking them higher up the pitch, we were taking the right positions when we were on the counterattack, and we scored. This was the big difference."

The win for United means it stays seventh in the English Premier League table, but moved it to within just two points of fourth place West Ham United with a game in-hand.

Christiane Endler became the first player from her country to win a Champions League title, but the feat came on the same day her mentor passed away.
UEFA・13 HOURS AGO
Insider

The 22-year-old led Lyon with nine Champions League goals en route to the title, but it still wasn't enough to earn Team of the Season honors.
UEFA・9 HOURS AGO