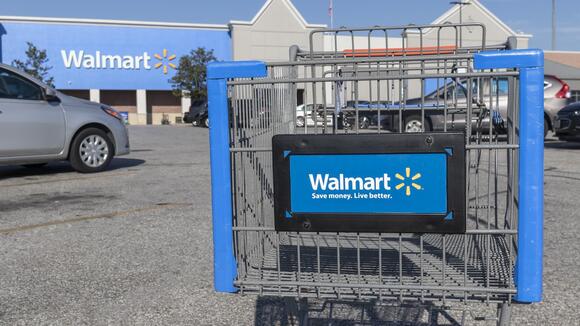 Dollar stores are great ways to save money and especially convenient when you’re in a pinch and need small quantities of just one or two items. They certainly come with their own caveats though, as oftentimes buying a single of a small item ends up costing far more than it would in the grocery store. Below are some examples of items that cost less in a regular grocery store or large retailer, as saving money isn’t always achieved though obvious avenues.

See: Should You Buy Groceries at the Dollar Store?
Explore: 10 Silly Mistakes To Stop Making When You Shop at Costco

Walmart charges about 9.28 cents per ounce of salsa when bought in larger quantities compared to Dollar Tree’s 12.5 cents, The List reported.

Walmart and Dollar Tree both sell the same 10-ounce can of Ro-Tel diced green chilies and tomatoes — but Walmart sells it for less. Walmart’s current price is 98 cents and Dollar Tree’s is — you guessed it — one dollar. On Dollar Tree’s website, there is also a minimum purchase of the product for 12 cans, or a case, whereas Walmart’s site allows you to add just one can. Not very COVID-friendly when you consider that you’d likely need to travel to the store to purchase just one can.

Discover: How To Beat Inflation at Costco and Other Grocery Stores
Evaluate: 25 Extra Grocery Costs You’re Probably Forgetting About

This classic might seem like a good thing to pick up cheap from Dollar General, but Walmart edges out the competition once again. A 21-ounce can at Dollar General costs $1.95, while Walmart’s 28-ounce can of the same product costs $2.18, coming in at .0779 per ounce. At that price,  21 ounces comes out to $1.635, about 30 cents cheaper than the Dollar General counterpart .

Another classic that costs surprisingly less at Walmart, the big-box giant lists a 15-ounce can on their site for $1.92. Meanwhile. Dollar General offers the same can for $2.05.

Learn: 10 Things You Always (and Never) Should Buy at the Dollar Store
Find: Grocery Prices Rising Faster Than Restaurant Bills Thanks to Inflation: How Restaurants Could Capitalize

This childhood favorite also pays to be bought at Walmart. Sixty chewable tablets cost $6.88 at Walmart, while Dollar General charges $7.50 for the same amount.

Canned beans retail for around 73 cents each at Walmart, but you’ll pay $1 each at Dollar Tree, the List reported. This amounts to savings of over 25%

Save: 9 Bills You Should Never Put on Autopay
Average Cost of Groceries: How Much Should You Be Spending Per Month?

While dollar stores can come in handy for certain items in a pinch, canned items and vitamins seem to be a smarter buy at Walmart . Remember, big box stores like Walmart have higher quantities of their products and move larger volumes, which allows them to offer lower prices on everyday items. Dollar stores market everything for a dollar, which can pay on certain products like paper goods, but won’t always make fiscal sense.

This article originally appeared on GOBankingRates.com : 6 Walmart Deals That Are Better Than the Dollar Store

A single quarter could be worth more than $200 -- and it has nothing to do with inflation. Learn: 5 Collector's Items Worth Selling for Extra CashExplore: 22 Side Gigs That Can Make You Richer Than a...
BUSINESS・15 HOURS AGO
GOBankingRates

6 Bad Habits That Hike Up Your Grocery Bill

$150-$300: That's the average amount of money per month, per person that people are spending on food, according to the budgeting app Mint.com. That estimated target varies by age and location, but...
GROCERY & SUPERMAKET・23 HOURS AGO
GOBankingRates

11 Items To Buy at Costco Instead of Amazon

It's so easy and convenient to order whatever you need from Amazon -- especially if you pay for a Prime Membership, which grants you same-day, one-day or two-day delivery on a variety of items....
SHOPPING・1 DAY AGO
GOBankingRates

25 Best and Worst Deals at Walmart

Walmart has earned its reputation as a money-saving store by offering low prices on just about everything from car accessories to canned goods. And while no one will doubt Walmart is a great place to...
SHOPPING・1 DAY AGO

Shopping at Costco can be a great way to save money, but you might not be maximizing your savings. Imagine how much extra cash could be in your wallet if you optimized your buying strategy. With a...
SHOPPING・1 DAY AGO
MotorBiscuit

If you find money on your windshield, your car may be a target for thieves. Click here to see how to respond to this situation!
CARS・21 DAYS AGO
GOBankingRates

According to the U.S. Department of Agriculture, emergency allotments were authorized under the Families First Coronavirus Response Act to help address temporary food needs during the pandemic for...
POLITICS・3 DAYS AGO

If you've joined the remote-work revolution, you might have the opportunity to move wherever you want for the first time in your career. If you're looking for a change of pace in a brand-new place,...
TRAVEL・3 DAYS AGO
US News and World Report

Whether you frequent an upscale salon or a local barber shop, you might feel uncertain about how much to tip – and it’s no wonder. Tipping can feel arbitrary, and you might be unsure about your understanding of tipping etiquette. For instance, are there hard and fast rules around tipping, or is it up to your discretion? Is there a going rate? Do barbers and stylists expect a certain percentage? Is cash best? Do you tip salon assistants?
SCOTTSDALE, AZ・21 DAYS AGO
GOBankingRates

Hold on to your wallet. Due to inflation and prices surging for natural gas, heating oil and other fuels, you will see a significant rise in your utility bills. So if you've opened your electric bill...
ENERGY INDUSTRY・18 HOURS AGO
GOBankingRates

If you are qualified based on your income, you might be able to get $30 off your internet service thanks to a program introduced by the Federal Communications Commission (FCC) called the Affordable...
INTERNET・1 DAY AGO
GOBankingRates

You're planning to retire in the not-so-distant future, which means you'll be living on a fixed income. Therefore, you're looking for a new hometown where you can enjoy life while stretching your...
ECONOMY・1 DAY AGO
GOBankingRates

You probably don't realize all the ways you're wasting money and leaving free money on the table -- and these little missteps can add up to big dollar losses. Fortunately, once you're aware of these...
PERSONAL FINANCE・2 DAYS AGO
GOBankingRates

The Best Things To Buy Generic at Walmart, and Some To Skip

With inflation hitting Americans right where it hurts, it can be tempting to skip the name brands and go all in on generic goods to save money. But the truth is that just because an item is...
SHOPPING・19 HOURS AGO
GOBankingRates

25 Things You Should Never Do With Your Money

There is possibly an endless list of things you shouldn't do with your money. But from bad habits to decisions based on wishful thinking, some of the bigger missteps can really cost you. Discover:...
PERSONAL FINANCE・1 DAY AGO
SheKnows

Click here to read the full article. Khloé Kardashian’s perfectly curated kitchen pantry (read: grocery store) is a slice of organized, structured Heaven that puts even the best kitchen storage solutions to shame. And if you’ve ever caught a glimpse of her color-coordinated fridge (and her urge to keep everything super neat and tidy inside it), the immaculate state of her pantry really should come as no surprise. Luckily for us, we can recreate some of the organizational magic with Aldi’s new glass storage containers. View this post on Instagram A post shared by Aldi Connoisseur 🌈 (@aldi.is.my.jam) Aldi fan account,...
CELEBRITIES・21 DAYS AGO
GOBankingRates

Social Security is an essential safety net for many Americans. Even if you haven't saved enough for retirement, you can still count on Social Security benefits in retirement. Read: 14 Key Signs You...
ADVOCACY・2 HOURS AGO
GOBankingRates

The Riskiest Places To Swipe Your Credit Card

Credit card fraud has become a constant and pervasive threat, and debit cards aren't immune to being stolen either. The Federal Trade Commission reported 66,090 instances of credit card...
CREDITS & LOANS・2 DAYS AGO