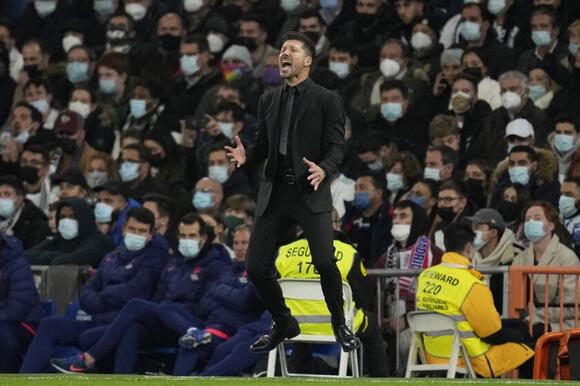 This season was supposed to be Diego Simeone’s chance to firmly establish Atlético Madrid as Spain’s top team and cap his incredibly successful decade as its coach.

While Barcelona lost Lionel Messi and Real Madrid had to replace coach Zinedine Zidane, Atlético strengthened its championship squad with the return of Antoine Griezmann and the signing of attacking players Rodrigo de Paul and Matheus Cunha.

It looked like the perfect scenario to repeat as Spanish league champions for the first time since 1950 and maybe even win the Champions League title which Simeone has twice come oh-so-close to grasping.

Atlético hosts Valencia on Saturday in fourth place in the league, trailing Madrid by 16 points with one more game to play.

It is also out of the Copa del Rey and barely advanced from the Champions League group phase.

Atlético has lost six of its last 10 games across all competitions. It was dumped from the Copa del Rey’s round-of-16 in a 2-0 loss at Real Sociedad on Wednesday, following a 2-1 loss to Athletic Bilbao last week in the Spanish Super Cup played in Saudi Arabia.

In December, it lost four in a row in the Spanish league, falling to Mallorca, Madrid, Sevilla and Granada. Previously, Atlético had never lost more than two consecutive league matches since Simeone became its coach in December 2011.

“Last season was magnificent and this one is proving to be very difficult,” said Simeone, who has led Atlético to two Spanish league titles, one Copa del Rey, two Europa League titles, and two Champions League final appearances.

“We still have opportunities in the league and the Champions League. I am not going to just sit still. I can promise you that.”

Most surprisingly, Atlético has lost its formidable defense. Loyal to Simeone’s vision of building a team on a strong defense, it is accustomed to leading the league in fewest goals allowed. This season, eight league teams have allowed fewer goals than the 24 conceded by Atlético.

Atlético has also faltered up front. Except for a goal against a third-tier opponent in the Copa del Rey, Luis Suárez hasn’t scored since a 3-3 draw at Valencia on Nov. 7. Griezmann was playing well enough until a muscle injury sidelined him for all of but one match since mid-December.

Still, for Simeone the only way forward is to return to the team’s core values.

“(We must) keep at it, accept our errors and, from a position of humility, improve,” he said.