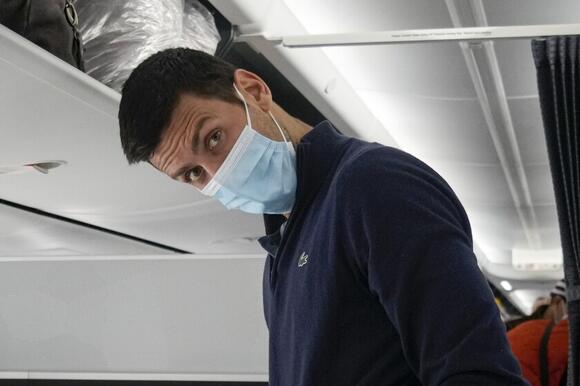 Three Australian Federal Court judges on Thursday revealed their reasons for backing a government order to deport tennis star Novak Djokovic, explaining they did not consider the “merits or wisdom of the decision.”

The judges on Sunday unanimously endorsed Immigration Minister Alex Hawke’s decision to deport the 34-year-old Serb following an urgent court challenge on the eve of what was to be Djokovic’s first match in defense of his Australian Open title. Djokovic accepted the verdict and flew from Melbourne to the United Arab Emirates hours later.

Chief Justice James Allsop and Justices James Besanko and David O’Callaghan on Thursday released a 27-page explanation of why they rejected Djokovic’s challenge.

“The court does not consider the merits or wisdom of the decision,” the judges said. “The task of the court is to rule upon the lawfulness or legality of the decision.”

"Another person in the position of the minister may have not cancelled Mr. Djokovic’s visa. The minister did,” they added.

Djokovic had his visa revoked at Melbourne’s airport on Jan. 6 hours after arriving because he wasn’t vaccinated against COVID-19. A judge later found that the border officer’s decision to cancel the visa was legally unreasonable and restored it.

But Hawke used his sweeping discretion under the Immigration Act to cancel the visa again on Friday on the broad ground of public interest.

Djokovic was a “high profile unvaccinated individual” whose presence in Melbourne “may foster anti-vaccination sentiment” and increase pressure on the health system, Hawke said in his 10-page decision to revoke the visa.

Hawke had rejected Djokovic’s arguments that his deportation would appear to be “politically motivated decision-making” that could jeopardize Australia's role as host of the first Grand Slam of the year.

Many argue the government deported Djokovic in response to public anger that an unvaccinated athlete had been allowed into the country without undergoing quarantine, even as the omicron variant strains hospitals, home COVID-19 tests are in short supply and Australians' relatives overseas are barred from visiting because authorities don't recognize their types of vaccines.

“It was open to infer that it was perceived by the public that Mr. Djokovic was not in favor of vaccinations,” the judges said.

Djokovic, who returned to Serbia, is in talks with lawyers about suing the Australian government for £3.2million ($4.4 million) for “ill treatment,” the London-based The Sun newspaper reported, citing an unnamed source close to his agent Edoardo Artaldi.

John Karantzis, a partner in Australian firm Carbone Lawyers, said Djokovic could have a case.

“If he concentrates on the ... unreasonable actions he would allege towards him, and not on policy grounds, he may succeed,” Karantzis told Seven Network television.

This story has been corrected to show the agent's name is Edoardo Artaldi, not Edoardo Artladi.

Tennis superstar Novak Djokovic is hopeful his three-year ban on entering Australia will be lifted with Anthony Albanese now leading the federal government. The Serbian world No.1, 35, was sensationally banned from competing at the 2022 Australian Open in January and deported by then Immigration Minister Alex Hawke due to being unvaccinated against Covid-19.
TENNIS・25 MINUTES AGO
AFP

Fusako Shigenobu, the 76-year-old female founder of the once-feared Japanese Red Army, walked free from prison Saturday after completing a 20-year sentence for a 1974 embassy siege. Shigenobu maintained her innocence over the siege, in which three Red Army militants stormed into the French embassy, taking the ambassador and 10 other staff hostage for 100 hours.
MILITARY・34 MINUTES AGO