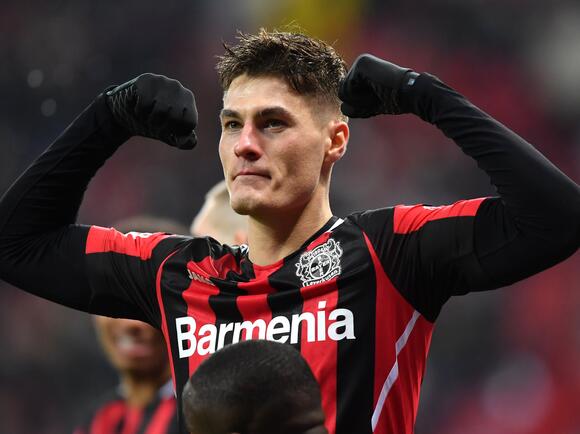 Just like the hang time of his extraordinary lob against Scotland this summer, there have been moments this season when Patrik Schick feels as though he’s been walking amongst the clouds. It has been seven months since his halfway-line goal left Hampden Park suspended in equal parts amazement and anguish, but that day still remains the starting point of another outlandish trajectory.

It might have been a little overshadowed by the twin auras of Robert Lewandowski and Erling Haaland, but since finishing as the Euros’ joint-top scorer, Schick has quietly transformed himself into one of the continent’s most formidable strikers. Last Saturday, in Bayer Leverkusen ’s 2-1 victory over Borussia Monchengladbach, the Czech scored his 18th goal in just 16 Bundesliga games. “The Euros gave me a lot of confidence but I wouldn’t say I’m doing anything different,” he says, just a few days before narrowly missing out on Fifa’s Puskas award. “I would say I’ve come to a point in my career now where I’m a more complete player. It has taken a lot of work and now, in this moment, the work is giving me everything back.”

For an impressively calm character, the work has often inflicted more duress than Schick has publicly let on, and his mind returns instinctively to another summer that almost defined him. In 2017, after scoring 11 goals in his debut Serie A season, Schick was being lured in half a dozen directions by Europe’s biggest clubs. Eventually, a £26m fee was agreed with Juventus and the deal was considered so water-tight that Schick even posed for photograph’s in the club’s training kit. A few hours after completing his medical, though, the news filtered out that inflammation had been detected in his heart. “It was a shock because I didn’t feel anything. I thought I was a healthy guy,” he says. “After they said it was a heart problem, of course, I was worried about my health. It was in my head that I might have to stop playing football completely.”

Thankfully, after a few weeks, the inflammation subsided and Schick was given the all-clear, but the scare still changed the course of his career irreversibly. Sensing their opportunity, Roma swooped in and signed him for a club-record fee. The price tag brought a different type of pressure; a cage of competition, comparisons and constant speculation. Schick struggled to settle, scoring just five league goals across two seasons, and he has no hesitations in admitting that “it was the hardest period of my career”.

“Everywhere I’d been, I had always scored goals,” he says. “It was a new experience for me and [looking back] there are definitely some things I would like to do differently. For example, when I signed I was injured but, because I came for a lot of money, I wanted to get back on the pitch as soon as possible. I started to train and play earlier than I should have and that brought me a lot of problems. I knew my quality, I still believed in myself, but the circumstances weren’t the best for me and I knew for my career I had to make a change. But I’m not worried about what could happen in the future [if I lost form again] because I know it made me a better player.”

Schick points out that he became accustomed to harsh critics long before leaving home, where posters of David Beckham adorned his bedroom wall. The story of him giving his overbearing father the finger during one academy match at Sparta Prague has gone down in folklore. The words that really stung, though, were delivered when he was playing for the club’s U18s. After scoring twice, he was hauled in to speak to Sparta’s sporting director, who claimed he lacked tactical understanding and didn’t fight properly for the team. “They said I could never make it on the top level,” he says. “I proved them wrong.”

Soon afterwards, he was shipped out on loan to Bohemians, a club built on rugged spirit better used to battles at the bottom of the Czech league. “The start was really tough,” Schick says. “There were a lot of experienced older players and the younger ones had bad times with them, but once I performed on the pitch they took me in. When I joined Sampdoria [for €4m from Sparta at the end of the season] the coach, Roman Pivarnik, called me and told me he hadn’t wanted me there at the beginning. He didn’t think the club needed a young player like me but he still gave me the chance. I convinced him about the player I am.”

With his struggles in Rome exorcised, after a season-long loan under Julian Nagelsmann at RB Leipzig provided the springboard for a permanent move to Leverkusen, there are few who need convincing any longer. Schick’s form this season has inevitably demanded attention from clubs across Europe again, particularly from within the Premier League, but although he doesn’t rule out that possibility in the future, he acknowledges that feeling at home has helped to bring out the best in him. “Let’s wait and see,” he says. “I’ve changed clubs a lot [six in as many years] so I never had time to feel settled. I’m really happy in Leverkusen and with my life in Germany so at this moment I’m not thinking about being transferred somewhere. I watch the Premier League and I like England but that doesn’t mean that if I continue like this I’ll play there.”

There’s nothing new or secretive anymore about how good Liverpool’s recruitment is, with January transfer window signing Luis Diaz making regular headlines to reinforce that fact this year.The Colombian has been in town for only 107 days, yet already has six goals, countless man of the match performances and even two trophies to his name since signing. To underline the good decision he made to join - and the choice of the Reds in signing him - the other club who tried to nab him in winter, Tottenham, have won two trophies since March 1999. That’s 8,460 days ago, to...
PREMIER LEAGUE・18 MINUTES AGO
The Independent

Chelsea vs Leicester City prediction: How will Premier League fixture play out tonight?

Chelsea take on Leicester City this evening at Stamford Bridge with pride and final placing to play for.Thomas Tuchel’s Blues had their status in next season’s Champions League confirmed earlier this week when Arsenal lost at Newcastle, but they still have a job to do to ensure they finish third ahead of London rivals Tottenham.Chelsea come into this game two points clear of Spurs and with a far superior goal difference, but defeat tonight would mean third place was up for grabs on the final day.Leicester meanwhile have put together back-to-back victories to close in on a top-half finish, and...
PREMIER LEAGUE・23 MINUTES AGO
The Independent

Thomas Frank is hopeful Christian Eriksen will agree to extend his stay at Brentford.The former Tottenham playmaker has been impressive since joining the Bees on a short-term deal in January.Eriksen had been looking for a club to restart his career after suffering a cardiac arrest while representing Denmark at Euro 2020.The 30-year-old’s form since means he is unlikely to be short of potential suitors but, after securing Brentford’s place in the Premier League for another year, manager Frank feels optimistic.The Dane said at a press conference: “I would love to say 100 per cent, but I am convinced there is...
PREMIER LEAGUE・3 HOURS AGO
The Independent

New England captain Ben Stokes will lead his side out against New Zealand at Lord’s next month without a host of fast bowling options available to him.Here, PA news agency looks at the fitness issues affecting England’s pace attack.Jofra ArcherWe're all with you and we're all gutted for you, @JofraArcher 😔— England Cricket (@englandcricket) May 19, 2022A longstanding elbow problem means Archer has not played for England since March 2021 but the 27-year-old was eyeing a T20 comeback this summer, with a view to kickstarting his international career. Those hopes were scuppered by the news that he has suffered a...
SPORTS・3 HOURS AGO