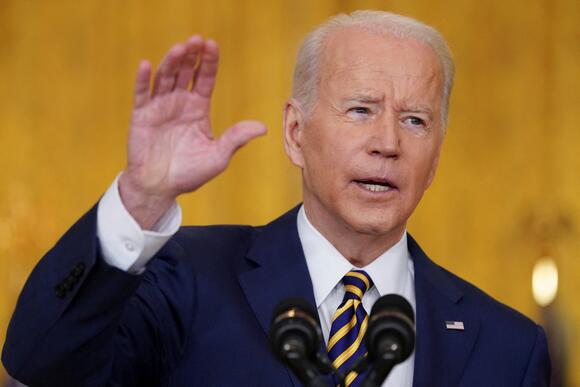 Joe Biden has said he thinks Russia will make a move on Ukraine , warning Moscow it would face a “stiff price” for an attack yet suggesting that a “minor incursion” might be treated differently by the US and its allies.

The US president’s comments at a White House news conference on Wednesday injected uncertainty into how the West would respond should Russian President Vladimir Putin order an invasion of Ukraine.

The White House later clarified that any Russian military action would be met with a “swift, severe” response.

"My guess is he will move in," Mr Biden said of his Russian counterpart at news conference. "He has to do something."

"Russia will be held accountable if it invades - and it depends on what it does. It’s one thing if it’s a minor incursion and we end up having to fight about what to do and what to not do, et cetera," the US president said.

"But if they actually do what they’re capable of doing … it is going to be a disaster for Russia if they further invade Ukraine. They’ll pay a stiff price, immediately, short-term, medium-term and long-term if they do it.”

Pressed on what he meant by a "minor incursion," Mr Biden said Nato allies are not united on how to respond depending on what exactly Mr Putin does, saying there were differences and that he was trying to make sure that "everybody’s on the same page."

"Big nations can’t bluff, number one. Number two, the idea that we would do anything to split Nato … would be a big mistake. So the question is, if it’s something significantly short of a significant invasion or … just major military forces coming across. For example, it’s one thing to determine if they continue to use cyber efforts; well, we can respond the same way," Mr Biden said.

Ukrainian President Volodymyr Zelenskiy said in a tweet on Thursday that he wanted to remind the “great powers that there are no minor incursions and small nations”.

Russian officials have repeatedly denied planning to invade, but the Kremlin has massed some 100,000 troops near Ukraine’s borders, a buildup the West says is preparation for a war to prevent Ukraine from ever joining the Nato Western security alliance.

Shortly after the nearly two-hour news conference ended, the White House stressed any Russian military move into Ukraine would elicit a tough response.

"If any Russian military forces move across the Ukrainian border, that’s a renewed invasion, and it will be met with a swift, severe, and united response from the United States and our allies," said White House press secretary Jen Psaki.

Nato has said it would move troops to its eastern flank in the event of an attack, and the US has been discussing a range of sanctions with its European allies.

The European Union on Thursday threatened Russia with “massive economic and financial sanctions” if it attacked Ukraine.

““We do not accept Russia’s attempt to divide Europe into spheres of influence. If attacks happen, we are prepared.” The US State Department has cleared Lithuania, Latvia and Estonia to send US-made missiles and other weapons to Ukraine, three sources familiar with the decision told Reuters.

The third-party transfer agreements will allow Estonia to transfer Javelin anti-tank missiles to Ukraine, while Lithuania will be permitted to send Stinger missiles, said one of the sources.

Mr Biden said a third summit with Mr Putin "is still a possibility" after the two leaders met twice last year. He said he was concerned that a Ukraine conflict could have broader implications and "could get out of hand."

The Biden administration has prepared a broad set of sanctions and other economic penalties to impose on Russia in the event of an invasion, and the US president said Russian companies could lose the ability to use the US dollar.

Mr Biden said Mr Putin had asked him for guarantees on two issues: that Ukraine would never join Nato and that "strategic" or nuclear weapons never be stationed on Ukrainian soil.

US officials see limiting Nato expansion as a non-starter, but Mr Biden noted there was little chance of Ukraine joining the alliance soon and he suggested there could be a deal under which the West might not station nuclear forces in Ukraine.

Visiting Kyiv in a show of support, US Secretary of State Antony Blinken said Russia could launch a new attack on Ukraine at "very short notice" but Washington would pursue diplomacy as long as it could, even though it was unsure what Moscow really wanted.

The Kremlin said tension around Ukraine was increasing and it still awaited a written US response to its sweeping demands for security guarantees from the West, including a halt to further Nato expansion and a withdrawal of alliance forces from central and eastern European nations that joined it after 1997.

The pessimistic statements highlighted the US-Russian gulf ahead of talks between Mr Blinken and Russian Foreign Minister Sergei Lavrov on Friday that one Russian foreign policy analyst called "probably the last stop before the train wreck”.

Russia has also moved troops to Belarus for what it calls joint military exercises, giving it the option of attacking neighboring Ukraine from the north, east and south.

"After Ukraine, if we're given the command, in six seconds we'll show you what we're capable of," Chechen leader Ramzan Kadyrov said.
POLITICS・10 HOURS AGO
Newsweek

The brigade said it hit the base of the Russian command staff and destroyed a military SUV marked "Z," killing several enemy soldiers in the process.
MILITARY・1 DAY AGO
Newsweek

International order will be thrown out the window if Russia is able to escape consequences over its invasion of Ukraine, US Gen. Mark Milley told CNN.
POLITICS・29 DAYS AGO

US president Joe Biden mocked walking out of a meeting with Australia’s prime minister Anthony Albanese after the latter recalled a trip to the US in his younger days and a visit with the National Rifle Association (NRA) more than three decades ago.Mr Biden pretended to storm out just hours before a teen gunman murdered 19 children and two teachers in an elementary school in Texas’ Uvalde town, in one of the worst mass shootings witnessed by the US in years.During his discussion with the US president on the sidelines of the Quad summit on Tuesday, Mr Albanese narrated...
POLITICS・17 HOURS AGO
americanmilitarynews.com

The intelligence the U.S. shared with Ukraine helped it continue to resist Russian invading forces and even shoot down a transport plane carrying hundreds of Russian troops, a new report revealed. According to current and former U.S. officials who spoke with NBC News on Tuesday, the U.S. provided critical intelligence...
MILITARY・29 DAYS AGO
Newsweek

Rep. Marjorie Taylor Greene (R-GA) speaks to supporters of former U.S. President Donald Trump at the Banks County Dragway on March 26, 2022 in Commerce, Georgia. This event is a part of Trump's Save America Tour around the United States. (Megan Varner/Getty Images) On Monday, CNN's Andrew Kaczynski and Em...
COMMERCE, GA・29 DAYS AGO

Russia’s president Vladimir Putin apparently survived an assassination attempt at the start of his invasion of Ukraine, the head of Kyiv’s military intelligence service has claimed.“There was an attempt to assassinate Putin… He was even attacked, it is said, by representatives of the Caucasus, not so long ago. This is non-public information. [It was an] Absolutely unsuccessful attempt, but it really happened… It was about 2 months ago,” Kyrylo Budanov claimed in an interview with Ukrainska Pravda.Meanwhile, in an address to world leaders at the World Economic Forum in Davos, Ukraine’s president Volodymyr Zelensky warned that Russia’s ongoing invasion...
POLITICS・2 DAYS AGO
The Independent

Kim Jong-un has vowed to bolster North Korea’s nuclear forces at “maximum speed” in a defiant speech during a massive military parade on Monday night.In his speech, Mr Kim also made an open threat that North Korea would use its “nuclear forces” against countries that provoked it.The military parade that started late on Monday night showcased the country’s largest-known intercontinental ballistic missile (ICBM) among other weapons.“We will continue to implement measures aimed at strengthening and developing our country’s nuclear forces at the maximum speed,” Mr Kim told his troops and the crowd gathered for the parade at a Pyongyang...
POLITICS・29 DAYS AGO
97.1 FM Talk

In an interview with Russian TV, Sergei Lavrov said that Russia is essentially at war with NATO. This rhetoric has some worried that Russia may use nuclear weapons in Ukraine. Lt. Col. Dakota Wood weighed in on the likelihood of this happening.
POLITICS・29 DAYS AGO

WASHINGTON (Reuters) - The United States on Tuesday offered a reward of up to $10 million for information on six people it described as Russian military intelligence officers who had conducted cyber attacks affecting critical U.S. infrastructure. The six officers work in a cyber-focused unit of Russia's Main Intelligence Directorate...
PUBLIC SAFETY・29 DAYS AGO
Salon

House Republican Leader Kevin McCarthy (R-CA) (Joe Raedle/Getty Images) There was a flurry of headlines last week when news broke that House Minority Leader Kevin McCarthy (R-CA) said out loud that he thought former President Donald Trump should resign in the wake of the deadly Jan. 6 insurrection. The focus was on the fact that McCarthy lied about ever expressing that thought - until, of course, he was confronted with the audio recording of him saying exactly that.
CONGRESS & COURTS・29 DAYS AGO
The Independent

When Vladimir Putin announced the invasion of Ukraine, war seemed far away from Russian territory. Yet within days the conflict came home — not with cruise missiles and mortars but in the form of unprecedented and unexpectedly extensive volleys of sanctions by Western governments and economic punishment by corporations.Three months after the Feb. 24 invasion, many ordinary Russians are reeling from those blows to their livelihoods and emotions. Moscow’s vast shopping malls have turned into eerie expanses of shuttered storefronts once occupied by Western retailers.McDonald’s — whose opening in Russia in 1990 was a cultural phenomenon, a shiny modern convenience...
POLITICS・3 DAYS AGO
The Independent

The west could have prevented Russia’s full-scale invasion of Ukraine by taking tougher actions against the Kremlin following its annexation of Crimea in 2014, Volodymyr Zelensky has told world leadersSpeaking at the annual World Economic Forum at Davos on Monday, the Ukrainian president tempered his gratitude towards countries involved in recent sanctions against individuals and firms close to the Putin regime.Many lives would have been saved if the west had imposed sanctions against Russia last autumn, when Moscow massed tens of thousands of troops at the Ukrainian border, he said.The Ukrainian president added that even this step would have been...
POLITICS・2 DAYS AGO