Arsenal vs Liverpool prediction: How will Carabao Cup semi-final play out tonight? 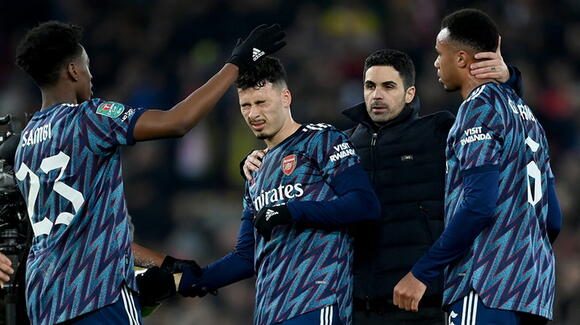 After this fixture, originally scheduled for 6 January, was postponed, Anfield hosted the first leg last week as Arsenal clung on for a 0-0 draw despite Granit Xhaka’s dismissal.

That leaves Mikel Arteta without the midfielder, with the Arsenal manager dealing with a particularly depleted squad having seen a request to postpone the North London Derby granted on Sunday.

Liverpool are thus favourites to take on Chelsea in the final, but Arsenal will hope to spring a surprise at home.

Jose Mourinho is expected to step up his efforts to bring Aston Villa midfielder Douglas Luiz to Roma after Wednesday’s Europa Conference League Final. The Brazilian has been on Roma’s radar since last summer and Villa are likely to consider offers for him, given there is only one year remaining on his contract.
PREMIER LEAGUE・9 MINUTES AGO
The Independent

Government sources believe the bid to push Chelsea’s sale through on Tuesday night could “go down to the wire”.Downing Street officials are understood to be hopeful of imminently issuing the new licence for Todd Boehly to complete his £4.25billion Chelsea takeover.Those involved in the sale at Whitehall want to sign it off before end of play on Tuesday, to ensure the club can meet all deadlines for registration for next season’s competitions.The Premier League confirmed Boehly and his consortium partners have passed the organisation’s owners’ and directors’ tests and that just leaves Government ratification as the final takeover step.“We now...
PREMIER LEAGUE・3 HOURS AGO