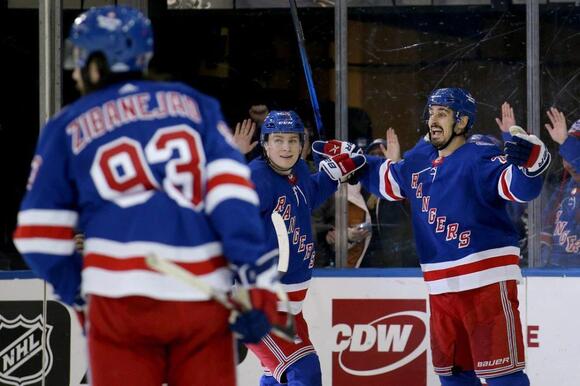 Ryan Strome scored the tiebreaking goal, Chris Kreider scored his 25th of the season and Adam Fox and Ryan Reaves each scored twice as the New York Rangers rallied for a 6-3 victory over the visiting Toronto Maple Leafs on Wednesday.

Reaves recorded his second career two-goal game as the Rangers won for the seventh time in 10 games (7-3-0). Fox netted the tying goal late in the second period and capped the comeback with an empty-net goal with 2:24 remaining.

New York goalie Igor Shesterkin made 17 of his 35 saves in the third period. He stopped the last 27 shots he faced.

Dysin Mayo, Lawson Crouse and Travis Boyd scored in a span of fewer than eight minutes in the second period for visiting Arizona, who maximized its opportunities in a win over New Jersey in Newark, N.J.

Johan Larsson scored in the third period for the Coyotes, who won despite being outshot 36-17. Goalie Karel Vejmelka made 35 saves for the Coyotes, who have won two in a row for just the second time this season. Arizona is 5-3-2 in its last 10 games after opening the season 5-21-2.

Nico Hischier scored in the first for the Devils, who have lost three straight and gone nearly two weeks without a win. New Jersey had three games postponed this month due to COVID-related reasons.

Samuel Girard broke a scoreless tie late in the second period and Nazem Kadri added an assist to go along with an empty-net score as visiting Colorado defeated Anaheim.

The NHL’s most efficient offense, averaging 4.25 goals per game entering Wednesday’s contest, was uncharacteristically quiet but the Avalanche still were able to extend their winning streak to four games and their points streak to 10 games (9-0-1).

Colorado goalie Pavel Francouz had 34 saves in his second career shutout while playing in place of Darcy Kuemper, who left Monday’s game against the Minnesota Wild with an apparent upper-body injury. Ducks goalie John Gibson had 27 saves in his first game since Jan. 4 after missing the last five games while in COVID-19 protocol.

On Sunday, the New York Rangers managed to find more open ice for their offense and then survived a barrage
RALEIGH, NC・8 HOURS AGO
Sportsnaut

The Tampa Bay Lightning can return to the Eastern Conference Finals for a third straight season with a victory against
TAMPA, FL・21 HOURS AGO

Noah Syndergaard missed the better part of two seasons because of an arm injury that resulted in Tommy John surgery,
ARLINGTON, TX・5 HOURS AGO
Sportsnaut

Trailing 2-1 in a playoff series is not uncharted territory for the Calgary Flames. They were in this exact situation
NHL・5 HOURS AGO
Sportsnaut

The NHL asked police in St. Louis to ramp up security at the Avalanche’s team hotel and the Blues’ arena
SAINT LOUIS, MO・10 HOURS AGO
Sportsnaut

Tampa Bay Lightning forward Brandon Hagel was fined $3,750 Monday for boarding the Florida Panthers’ Eetu Luostarinen. It was the
TAMPA, FL・11 HOURS AGO

The St. Louis Cardinals are undertaking a youth movement during their road series this weekend against the Pittsburgh Pirates, but
SAINT LOUIS, MO・2 DAYS AGO