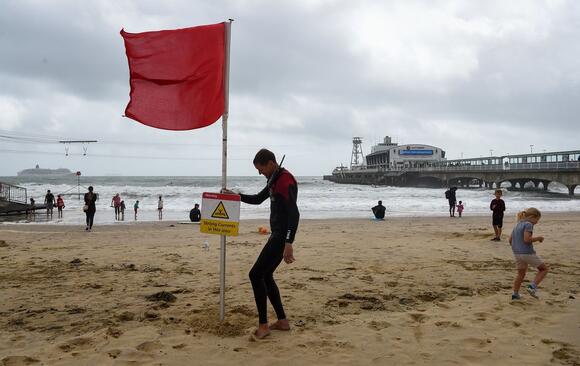 Strap in! It could be a bumpy ride this year.

Financial markets are off to a woeful start for the bulls in 2022. Blame surging inflation, an out-of-step Federal Reserve or a nagging pandemic. But whatever boogeyman market participants identify, there are clear signs that the market is experiencing signs of wear and tear.

Here are a few market-based indicators that imply more bumps in the road ahead, or at least highlight the uneven path of market traversed thus far:

The Nasdaq Composite (COMP) has been in a downward spiral. The popular technology index on Wednesday logged its first close in correction territory since last March, closing 10.69% below its Nov. 19 record peak and meeting the commonly used definition for a correction.

On top of that, the Nasdaq on Tuesday notched its first close since April 2020 below a closely watched, long-term trend line — its 200-day moving average . The breach of its 200-day may be a more compelling cause for concern for optimistic investors, given how long the index was able to stay above that level.

See: The Nasdaq Composite just logged its 66th correction since 1971—here’s what history says happens next in the stock market

Moreover, Big Tech has performed the worst within the Dow Jones Industrial Average

(DJIA) with Salesforce.com (CRM) Microsoft Corp. (MSFT) Cisco Systems (CSCO) Apple Inc. (AAPL) and International Business Machines Corp. (IBM) all down sharply in the year to date. Only Intel Corp. (INTC) has been positive, up 4.1%, so far in January. Semi’s slammed

Semiconductor stocks have particularly taken it on the chin, with the popular exchange-traded iShares Semiconductor ETF (SOXX) down 7.3% this week and down 8.5% so far this year, producing underperformance that rivals that of the Nasdaq Composite.

Market technician Mark Newton notes that the semiconductor ETF, a proxy for appetite for the broader technology sector, “just violated lows going back since last November 2021.” 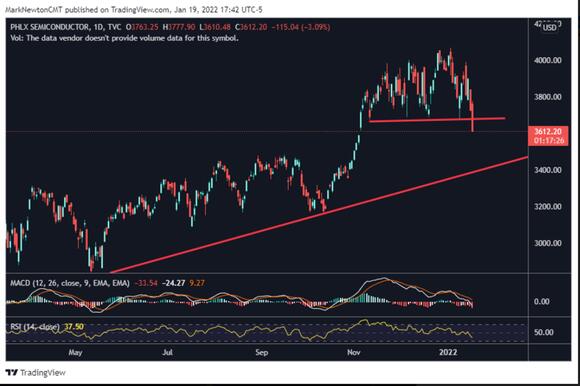 He makes the case that in the near term, further weakness in SOX looks likely to 3,400, though he is bullish once it gets sufficiently beaten up.

Death cross for the smalls

Small-caps, as measured by the Russell 2000 index (RUT) have fared almost as badly as technology shares, down 8.1% in the year to date. 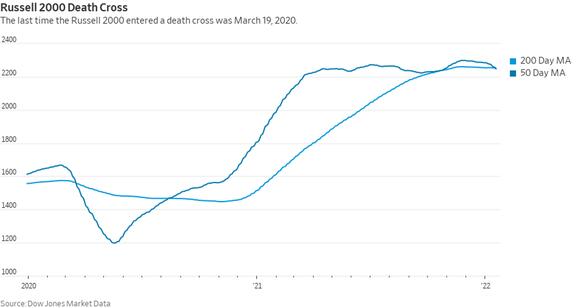 According to the folks at Dow Jones Market Data:

The S&P 500’s midterm moving average, its 100-day, was breached on Wednesday. The broad-market index hasn’t closed below that level since October. Falling below that mark now may signal that the 200-day trend line may be next to fall. 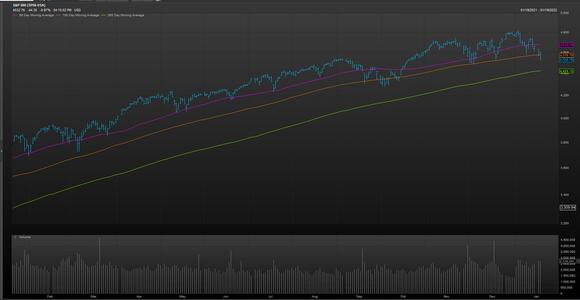 Newton on Wednesday also noted that the broad market Russell 3000 index (RUA) was pointing to further deterioration, noting that the index has broken lows going back since December, “which should provide a clear path down to October 2021 lows.” 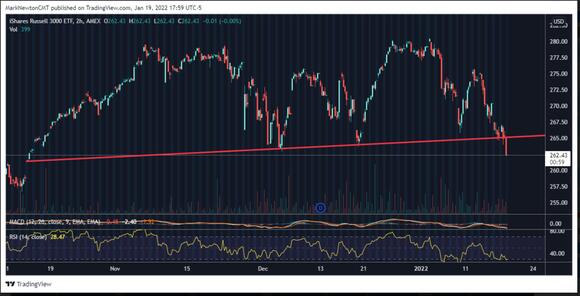 “This is a very broad-based gauge for U.S. equities, so it remains difficult to think markets are bottoming when this index is hitting multi-month lows. Bottom line, this price deterioration is a new and bearish technical development and momentum is not really all that oversold on most time-frames to argue for any sort of low,” he wrote.

A closely watched measure of stock-market volatility often used as a proxy for investor anxiety, the Cboe Volatiity Index (VIX) typically referred by its ticker “VIX,” has been elevated for much of 2022. The index, which has a long-run average around 20, has been hanging above that level. The VIX, which closed at 23.85 on Wednesday, is trading above its 50-day moving average of 20.24, FactSet data shows.

The scope of the stock market’s upside potential may hinge on the VIX, which uses options prices on S&P 500 stocks to gauge implied, or expected, volatility for the benchmark over the coming 30-day period.

The VIX moves inversely to stocks and a rising VIX implies that investors are betting on turbulence in the coming month.

One of Europe’s most closely watched government bond yields, the 10-year German Treasury, aka the bund, turned positive for the first time since 2019, highlighting a broad swing higher in global yields.

Markets are anticipating an aggressive path for policy from the U.S. Federal Reserve and that is rippling through global markets, least of all those in America.

A rapid rise in yield has been putting pressure on the stock market and a climb in German bunds may contribute to headwinds for the U.S. Treasury because European investors might see some value in buying bunds in positive territory. Yields rise for debt as prices fall.

U.S. stocks tumbled sharply Tuesday, resuming a selloff and sending the S&P 500 back toward bear-market territory after an earnings warning from Snapchat parent Snap triggered losses across the internet sector. How are stocks trading?. The Dow Jones Industrial Average. DJIA,. -0.89%. dropped 409 points, or 1.3%, to 31,471. The...
STOCKS・10 HOURS AGO
MarketWatch

U.S. inflation in April plunged to an annualized rate of 4.1% — less than half of where it stood in the prior month. This will no doubt come as a surprise for those of you who focus only on the financial headlines. They informed us that the Consumer Price Index dipped slightly in April, to 8.3% from 8.5%. This modest decline was less than what Wall Street had been expecting, and on the day it was reported the S&P 500.
BUSINESS・7 HOURS AGO
MarketWatch

Amy Faust Liggayu, 32, a market-research project manager based in Tinley Park, Ill., and mother of a 7-month-old son, never imagined she would have a life where she could spend five days a week with him while also working full time. But that was before March 2020, when the COVID-19 pandemic forced offices across the country to tell their employees to work from home.
TINLEY PARK, IL・1 DAY AGO
electrek.co

As part of a lawsuit between shareholders and Elon Musk regarding his “funding secured” tweet, new text messages and emails between Musk and people involved have been released. The communications pretty much confirmed how most people saw the situation: Elon Musk took a meeting with the head of...
BUSINESS・29 DAYS AGO

A top US official in the Pacific has warned that America would have to “respond” if the Solomon Islands allows China to establish a military base there.Following a “constructive and candid” 90-minute meeting with prime minister Manasseh Sogavare, ambassador Daniel Kritenbrink said that the security deals between China and the Solomon Islands present “potential regional security implications” for the US and other allies.“We wanted to outline for our friends in the Solomons what our concerns are,” Mr Kritenbrink, US assistant secretary for East Asian and Pacific Affairs, told reporters.“We have respect for the Solomon Islands’ sovereignty. But we also...
FOREIGN POLICY・28 DAYS AGO
dailyhodl.com

Silk Road founder Ross Ulbricht is forfeiting billions of dollars worth of Bitcoin (BTC) and other crypto assets to the US government. According to a new court filing, Ulbricht will relinquish any claim to over 69,000 BTC and undisclosed amounts of Bitcoin Gold (BTG), Bitcoin SV (BSV) and Bitcoin Cash (BCH) worth a combined $3 billion as part of a settlement.
PUBLIC SAFETY・29 DAYS AGO
MarketWatch

Greencore Group PLC GNC, +4.47% reported on Tuesday a swing to a pretax profit for the first half of fiscal 2022, and said that its current second half performance is positive. The London-listed convenience-food manufacturer posted a pretax profit for the 26 weeks ended March 25 of 1.0 million pounds...
FINANCIAL REPORTS・11 HOURS AGO
Reuters

NEW YORK, May 24 (Reuters) - Oil prices were little changed on Tuesday in choppy tradeafter the U.S. energy secretary said Washington has not ruled out export restrictions to lower fuel prices. Concerns over a possible recession and China's COVID-19 curbs also weighed on the market. Brent crude rose 9...
TRAFFIC・36 MINUTES AGO

SEOUL –Samsung Group said Tuesday that it would invest about $356 billion over the next five years in its semiconductor and biopharmaceuticals businesses, as well as other next-generation technologies, where global competition is intensifying. The plan extends and increases a decision to invest $190 billion through 2024, announced in...
BUSINESS・12 HOURS AGO
MarketWatch

Donald Trump hopes to avoid a stinging defeat in the Georgia governor’s race on Tuesday as Republican primary voters decide the fate of the former president’s hand-picked candidate to lead one of the most competitive political battlegrounds in the U.S. In all, five states are voting Tuesday, including...
GEORGIA STATE・10 HOURS AGO