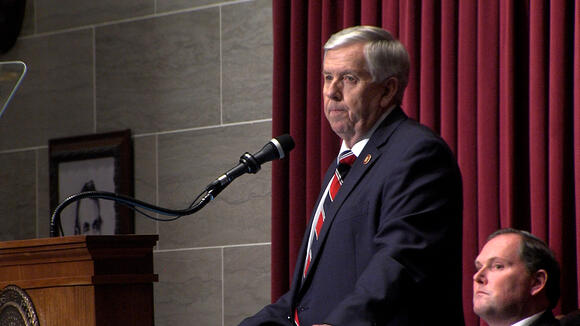 In his 2022 State of the State address , Gov. Mike Parson proposed raising the starting pay for Missouri teachers.

Parson's State of the State address laid out his fiscal priorities for the 2023 budget, which goes into effect July of this year. Included in his proposed budget is $21.8 million to raise the starting pay for Missouri teachers to $38,000. The current starting pay for teachers in Missouri is $32,000, according to the National Educators Association. Missouri ranks 50th in the country for teacher pay.

Parson's plan would have school districts sharing the load with the state to raise teachers' salaries.

"By partnering with local school districts, we can increase the baseline salary for new teachers to $38,000," Parson said.

"It's something that I can tell you our caucus every year since I've been here and I never would be on before that has asked for increasing the starting teacher pay," Quade said.

Democrats gave a standing ovation when Parson announced the idea. However, Quade said the reaction from her colleagues on the other side of the aisle concerns her.

"It took a while for the other side to join us in that clapping," Quade said. "I hope that's not indicative of what's about to happen in that fight."

Fulton Middle School Principal Beth Houf was one of the governor's guests for his address. Houf is the first Missouri principal to be named National Principal of the Year by the National Association of Secondary School Principals.

Houf told ABC 17 she's excited by the prospect of a pay raise for teachers. Houf said teachers don't go into the career for the pay, but it's important for people to make a decent living.

With the rise of COVID-19 cases in schools, Houf said she and other educators are still learning how to handle all the challenges the pandemic has brought on.

"We do not have subs daily, and so teachers are using their planning time to sub, discipline and mental health concerns have been there as well just because it's hard on kids," Houf said.

The post Parson proposes pay raise for Missouri teachers in State of the State address appeared first on ABC17NEWS .

Through August 2021, the school district had spent $6,246 defending itself against the lawsuits. The post Columbia Public Schools hopes insurance will help cover costs of lawsuit over face masks appeared first on ABC17NEWS.
COLUMBIA, MO・1 DAY AGO
KMIZ ABC 17 News

QUESTION OF THE DAY: Does Missouri need a ‘red flag’ law on guns?

Red flag laws are in the spotlight after a Buffalo mass shooting in which the suspect had a history of threats. The post QUESTION OF THE DAY: Does Missouri need a ‘red flag’ law on guns? appeared first on ABC17NEWS.
MISSOURI STATE・12 HOURS AGO

The board approved a resolution for a pre-annexation agreement with MO Lake Development, LLC. The post Public hearing over proposed Camdenton development set for June 7 appeared first on ABC17NEWS.
CAMDENTON, MO・1 DAY AGO
KMIZ ABC 17 News

Over the past 10 years, over 100 schools throughout the state have transitioned to a four-day workweek, Hallsville being the most recent to make the switch for its 2022-2023 school year. The post Hallsville school district will switch to four-day school week due to recruitment troubles appeared first on ABC17NEWS.
HALLSVILLE, MO・22 HOURS AGO

A vigil Thursday morning hopes to bring attention to removing more than a dozen pin oak trees from the University of Missouri's campus. The post Vigil held to share concerns about removal of oak trees from MU’s Francis Quadrangle appeared first on ABC17NEWS.
COLUMBIA, MO・5 HOURS AGO
KMIZ ABC 17 News

QUESTION OF THE DAY: Should voters decide on Columbia’s roll cart ban?

The Columbia City Council voted Monday to rescind a ban on rolling trash bins instead of putting the question on the ballot. The post QUESTION OF THE DAY: Should voters decide on Columbia’s roll cart ban? appeared first on ABC17NEWS.
COLUMBIA, MO・1 DAY AGO

QUESTION OF THE DAY: Did the Missouri legislature’s priorities reflect your own?

Rental prices nationwide have soared over the past year and experts predict they will remain high throughout 2022. The post Study shows rising rent prices in Missouri appeared first on ABC17NEWS.
COLUMBIA, MO・3 DAYS AGO

Lawmakers looking to next legislative session

The superintendent of Marshall Public Schools said in a statement shared with media Monday that no students have been suspended over protests that took place on campus last week. The post Marshall school district releases statement about student protesters appeared first on ABC17NEWS.
MARSHALL, MO・2 DAYS AGO
KMIZ ABC 17 News