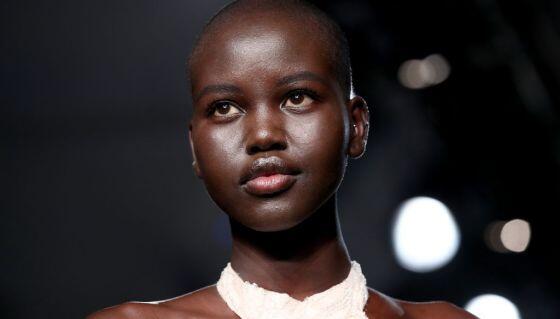 Under the helm of Black editor-in-chief Edward Enninful, British Vogue has become one of the most forward-thinking publications in fashion — some even prefer it over the more popular and preceding American edition.

However, while some saw the move as revolutionary, others felt the creative direction of the editorial downplayed the cover stars natural features by muting out their skin tones and putting wigs on their heads that hid the real texture of their hair.

When the cover was first revealed last week on January 13, hordes of fashion aficionados flocked to social media to give their critiques on the execution. The Instagram post received over 400,000 likes, including one from pop star Ariana Grande and a comment from renowned designer Marc Jacobs that simply referred to it as “beyond.” Cover star Adut Akech Bior, who got the honor of a solo cover as well, also gave her stamp of approval by writing in the comments that it was “So so so special.”

Unfortunately not everyone felt the same joy and appreciation of seeing dark-skinned women represented on the cover of British Vogue, but not due to the reasons that you’re probably thinking. On the same Instagram post, one user wrote in the comments, “We are too far along in the movement for me to applaud this. I was fearful of commenting because Vogue is a model’s dream so bravo to the ladies. Art directors, stylists, editors: this photo is gloomy and doesn’t highlight the models’ beauty. And the wigs? Really? Thank you but try again,” garnering over 300 likes from those that agreed. WNBA veteran Mistie Bass also took issue with the hair choice, writing, “I’m confused as to why not one is wearing a natural hairstyle???,” while also adding, “Beyond that that shades of black are incredibly beautiful!”

Twitter proved to be way more critical of the cover, with many loving the idea of British Vogue using African models with darker skin tones but slamming the publication for the jet-black attire and wigs with hair texture more synonymous with white woman.

Take a look below at some of the standout tweets we saw from those who felt offended by the Feb 2022 cover of British Vogue , and let us know which side of the argument you agree with:

1. I showed this to my 12 year old daughter and asked for her comment and all she could say was that “their hair looks atrocious” Clearly SHE doesn’t feel recognised or affirmed or inspired here. I wonder who does. #DoBetter #misrepresentation

2. No natural African hair? No african hair styles? No Afro? But wigs!! That black Colour and lighting is horrendous

3. That British vogue cover gives me the ick. It’s very weird when the vogues of the world use blackness as a costume/prop. Those models are beautiful black women but something about the lighting and composition gives me high fetish not fashion.

4. As a Black woman who is darker, I am thrilled to see these models on the cover of @BritishVogue , getting the representation they deserve However, I am disappointed that many of their skin tones are portrayed in an inaccurate and over-dramatized fashion (1/6)

5. Look I’m a fan of British Vogue since Mr Enninful became EIC but I’m honestly not sure why this cover is not well-lit & why the models are made to be mannequin-esque & we lose their features & beauty. Vogue as a whole really struggles with lighting & shooting black women but WHY?

6. In this video, you can see that the models have different shades and coloring. But @BritishVogue has had them all darkened to the same shade on the cover. Why? We come in all shades of Beauty.

8. I miss her on twitter.. but Christiana Mbakwe-Medina summed it up perfectly! I will buy the magazine because I adore the models but the cover is a travesty.. British Vogue usually gets it so right with their Black models.. but this right here… awful

9. I don’t think anyone is wrong (except the colorist/anti black women crews) about the British Vogue cover. Two things can be right at the same time. Is it weird how they darkened the photos? Yes. Is the cover beautiful? Yes.

10. Casting dark skin people and editing them charcoal black in every editorial is not appreciation nor is it the pinnacle of inclusivity fashion wants it to be. And it is becoming more and more trendy. I rest my case

The Duchess of Sussex went unnoticed as she donated food at a community centre in Uvalde on Thursday. Meghan Markle cut a low profile as she went to honour victims of the tragic school shooting that killed 21 people, including 19 children. The royal reportedly entered the back entrance of Herby Ham Activity Center to deliver two crates of food, beverages, and desserts for blood donors.
UVALDE, TX・17 HOURS AGO