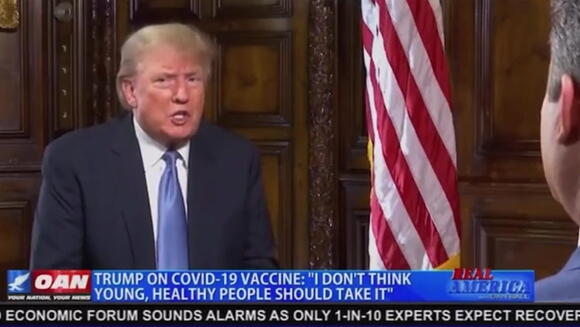 A former Republican congressman has argued Florida governor Ron DeSantis would be far more “dangerous” as the standard-bearer of the Republican base.

The one-term congressman, formerly a Republican and now an independent, lashed out at the Florida governor, one of the most popular Republicans in the country, lambasting his handling of the Covid crisis, critical race theory, voting rights, and other matters in the state.

The comparison between Mr Trump and Mr DeSantis is increasingly on the mind of political observers, as top Republicans begin positioning themselves for the 2024 presidential race. Both men are thought of frontrunners, and recent polling suggests the Florida governor would top the field if Mr Trump wasn’t present.

Other top Republicans have said they won’t run if Mr Trump throws his hat in the ring, but so far the Florida governor hasn’t made such a commitment.

The two appear to be trading thinly veiled insults in recent weeks.

A Trump confidante recently told Axios that the former president thinks his occasional ally in Florida “has no personal charisma and has a dull personality”.

“I’ve had the booster. Many politicians — I watched a couple of politicians be interviewed and one of the questions was, ‘Did you get the booster?’ because they had the vaccine, and they’re answering like — in other words, the answer is ‘yes’ but they don’t want to say it because they’re gutless ,” the former president, who has yet to announce an official 2024 bid, said last week.

The Florida governor, for his part, has said speculation about a rift between the two is a media creation, not a reality.

He did, however, offer criticism of the Trump administration’s handling of the Covid crisis on an episode of the Ruthless podcast last week, recounting his discussions with the administrations during the early stages of the coronavirus in 2020.

“I never thought it would lead to locking down the country,” Mr DeSantis said. “Knowing now what I know then, if that [a lockdown was] a threat earlier, I would have been much louder about trying to say, you know, this is not [inaudible]. But what happened was people like [Dr. Anthony] Fauci panicked.”

Donald Trump held his first campaign-style rally of the year over weekend in Arizona, where he sympathised with 6 January insurrection plotters and continued to insist falsely that he won the 2020 election.

“These people are living in hell, they’re being hounded like you hound the worst animals,” Trump said. “The real insurrection took place on Election Day, Nov. 3.”

In the latest set of text messages between the Fox News host and Trump's former chief of staff, Meadows told Hannity to "Stress every vote matters."
PRESIDENTIAL ELECTION・25 DAYS AGO
NBC News

Dark on TV. Trailing badly in polls. Written off by Republican political insiders nationally and in Georgia. Former Sen. David Perdue’s once-spirited primary challenge to Georgia Gov. Brian Kemp appears to be sputtering in the homestretch ahead of Tuesday’s vote. Even the man who recruited Perdue to run...
GEORGIA STATE・1 DAY AGO
Newsweek

With a key Senate primary still in the balance, Donald Trump is again casting doubt on election integrity without offering any evidence.
PENNSYLVANIA STATE・2 DAYS AGO
WashingtonExaminer

When President Joe Biden named Kamala Harris as his running mate, he promised his former campaign rival would be one of the most influential voices in the White House.
PRESIDENTIAL ELECTION・25 DAYS AGO

Greene testified on Friday that she didn't recall whether she asked Trump to invoke military rule, despite telling Meadows to relay the idea to Trump.
ATLANTA, GA・25 DAYS AGO
Business Insider

EXCLUSIVE: A group of Republican senators is introducing legislation to block the Biden administration from sending personnel and funding from the Department of Veterans Affairs (VA) to alleviate the crisis at the southern border. The senators are alarmed by the Biden administration's announced termination of Title 42 on May 23,...
CONGRESS & COURTS・24 DAYS AGO
Fortune

Sign up for the Fortune Features email list so you don’t miss our biggest features, exclusive interviews, and investigations. Reports that Twitter’s board could come to a deal with Elon Musk as early as Monday are raising red flags among media watchdog groups. On Monday, Media Matters, a...
PRESIDENTIAL ELECTION・25 DAYS AGO

A new Republican-backed law in Florida will repeal Disney’s special tax status, resulting in a property tax increase of up to 25% for residents of Orange County. MSNBC’s Lawrence O’Donnell explains how the move comes as GOP retribution for Disney’s opposition to Florida’s “Don’t Say Gay” bill.April 26, 2022.
FLORIDA STATE・25 DAYS AGO
Business Insider

Rep. Greene has repeatedly pushed the conspiracy theory that left-wing activists and rogue FBI agents carried out the siege.
GEORGIA STATE・25 DAYS AGO
The Independent

Defeated Pennsylvania Senate candidate Kathy Barnette has placed blame for her third-place finish in Tuesday’s Republican primary squarely on the shoulders of Fox News host Sean Hannity. In a video posted to her Twitter account early on Wednesday morning, Ms Barnette thanked her supporters, but pivoted to attacking the Fox commentator.“I do want to say: never forget what Sean Hannity did in this race. Almost single-handedly, Sean Hannity sowed seeds of disinformation, flat-out lies every night for the past five days. And that was just extremely hard to overcome, apparently”.Ms Barnette’s grievance with Hannity stems from his decision to...
PENNSYLVANIA STATE・2 DAYS AGO
Fox News

Abortion witness tells Congress men can get pregnant and have abortions

A witness who supports abortion rights during the House Judiciary Committee's abortion hearing Wednesday said she believes a person can choose what gender they identify as and that, therefore, men can get pregnant and have abortions. Aimee Arrambide, the executive director of the abortion advocacy group Avow Texas, was asked...
CONGRESS & COURTS・2 DAYS AGO
Newsweek

Patricia Arquette has angrily confronted Elon Musk after he revealed his plans to vote Republican.Writing on Twitter earlier today (18 May), Musk explained that he has switched allegiance from Democrat as they have become a party of “division and hate”.He wrote: “In the past I voted Democrat, because they were (mostly) the kindness party. But they have become the party of division & hate, so I can no longer support them and will vote Republican. Now, watch their dirty tricks campaign against me unfold.”To this statement actor Arquette responded: “You say this with a straight face as Republicans roll...
CELEBRITIES・2 DAYS AGO
americanmilitarynews.com

An abortion care provider pushed back on questions from a Republican congressman when she was asked about whether she would ever abort a foetus that was halfway through the birth canal.The questioning took place during a House Judiciary Committee hearing focusing on how abortion rights are at risk. The hearing came after Politico reported a leaked Supreme Court draft opinion overturning Roe v Wade, the 1973 Supreme Court ruling that enshrined the right of women to seek an abortion.Representative Mike Johnson of Louisiana asked Dr Yashica Robinson, an obstetrician-gynecologist based in Huntsville, Alabama, whether she supports the right of...
HUNTSVILLE, AL・2 DAYS AGO
Newsweek

"This should never have been allowed to occur to my colleague," Representative Matt Gaetz said about the legal challenge seeking to disqualify Greene.
GEORGIA STATE・25 DAYS AGO
Newsweek

The former president referenced scoring well on a cognitive test in 2018, which is designed to detect whether a person has early stages of dementia.
DELAWARE COUNTY, OH・26 DAYS AGO
The Independent

Despite outcry from their elected officials in recent days, nearly half of Republican voters believe that the United States should provide baby formula to non-citizens at the country’s southern border. Republican lawmakers and right wing pundits have lashed out at President Joe Biden this week for continuing to provide formula to babies coming to the country with their families amid a nationwide shortage, with several conservative leaders referencing the alleged prioritization of “illegal babies” and “illegal mothers.” GOP voters, however, are not exactly rallying around the nativist attacks on migrant mothers and their babies. A new poll from YouGov conducted...
U.S. POLITICS・1 DAY AGO