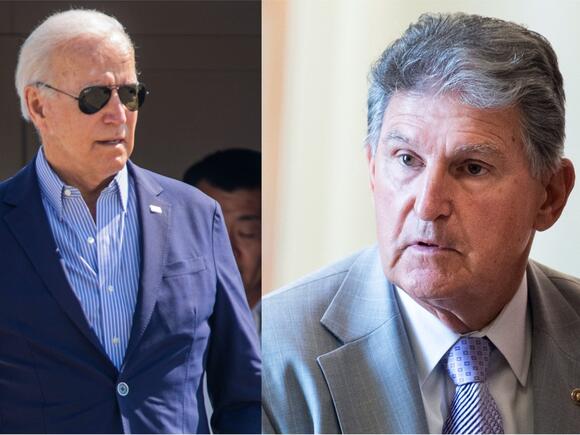 President Joe Biden conceded on Wednesday that the expanded child tax credit may not survive the negotiations around his $2 trillion Build Back Better bill.

"There's two really big components that I feel strongly about that I'm not sure I can get in the package," Biden said at a news conference on Wednesday. "One is the childcare tax credit and the other is help for the cost of community colleges."

He added both are "massive things" that he's campaigned on and would attempt to get them in the event both are dropped.

Biden's comments amount to a remarkable admission that he may fail to renew a program forming the center of the party's anti-poverty agenda. The child tax credit was expanded for a year under the stimulus law, which widened its reach to families who don't have to pay taxes for the first time and boosted its amount to $3,000 per kid and $3,600 for each child age 5 and under.

Congress allowed it to expire last year, though Democrats want to revive it for a year as part of their Build Back Better plan. The package has stalled out for now due to opposition from a key holdout within their ranks: Sen. Joe Manchin of West Virginia. Without his support, Senate Democrats can't muscle it through over unified GOP resistance in the 50-50 Senate and turn it into law.

Manchin has pushed attaching a work requirement on the child tax credit, a step that experts say would significantly dent its effectiveness on cutting child poverty and shut out many of the poorest families from the program. The program has slashed child poverty up to now by roughly 30%, according to the Center on Poverty and Social Policy.

Republicans are largely lined up against the child allowance, arguing that giving families checks with no strings attached discourages people from working. That hasn't shown up in studies gauging the program's effects so far.

Manchin, however, poses a formidable hurdle for Democrats because his views on the benefit are an outlier in the Democratic caucus. Congressional Democrats are mostly behind renewing the program as-is.

The conservative West Virginia Democrat slammed the brakes on the bill a month ago. But White House officials are starting to signal they will re-engage with Manchin to try and get his critical vote.

"No one has come to me on that," he told reporters on Capitol Hill before entering a room where Senate Republicans were having dinner.

Other Democrats are making clear they will continue pressing to keep the expanded program within the legislation.

"President Biden rightly celebrated the reduction in child poverty over the past year as the 'biggest drop ever in American history,'" Sen. Michael Bennet of Colorado said in a statement to Insider. "It's clear that the expanded Child Tax Credit is the most significant policy for families and kids to come out of Washington in generations, and I'm fighting to extend it."

I'm all for feeding and educating our children but first we need to keep them safe! The crime is so bad that kids are getting shot while sleeping in their own beds! This administration needs to focus on the safety of it's citizens above and beyond everything else! I've never felt this UNSAFE in the USA! Sadly I do not trust this President to keep us safe! He doesn't seem to be concerned about crime in the least!

So, where does this money come from? Answer: every taxpayer in the USA. What I see is the young generation not being " money conscious". They spend more than they can afford and expect everyone else to bail them out.

The effort to strike a deal with Manchin hasn't gone anywhere in months. Some Democrats in the room with him don't know if he wants a bill.
CONGRESS & COURTS・2 DAYS AGO
Business Insider

The powerful group is seeking a meeting with Biden who is weighing at least $10,000 in student loan debt forgiveness.
CONGRESS & COURTS・1 DAY AGO
Business Insider

"We have an enemy to defeat, but we will never be able to defeat them until we defeat the cowardly and weak members of our own party," he said.
HENDERSONVILLE, NC・2 DAYS AGO
Business Insider

Walker, a US Senate candidate in Georgia, is obligated by law to accurately disclose details about his personal finances but is unlikely to face a significant penalty.
GEORGIA STATE・2 DAYS AGO
Business Insider

26 billionaires, including Elon Musk and Jeff Bezos, paid just a fraction of the taxes the average American owes

A new analysis finds that Elon Musk had an average tax rate of just 2.1% on his wealth growth from 2013 to 2018.
INCOME TAX・2 DAYS AGO
Business Insider

Rep. Kinzinger mocked Madison Cawthorn for losing his seat in Congress after saying RINOs would never beat him

Kinzinger has repeatedly clashed with MAGA Republicans, including Cawthorn, as one of the few Trump critics in the GOP.
HENDERSONVILLE, NC・2 DAYS AGO

When the US government seized $337,000 from Alexander Leszczynski, he produced "a fabricated pardon purportedly signed" by Trump, the Justice Department said.
FLORIDA STATE・17 HOURS AGO
Business Insider

The outcome of the general election in November could tip the balance of the Senate. Trump urged Oz to pre-emptively declare victory in the meantime.
PENNSYLVANIA STATE・2 DAYS AGO
Business Insider

Progressives claim victory in three key House races, which have yet to be called. Wins could give progressives much-needed momentum in the primaries.
PENNSYLVANIA STATE・2 DAYS AGO

MAGA world would rather sit out the Georgia governor's race in November than vote for the incumbent who certified President Joe Biden's 2020 win.
GEORGIA STATE・18 HOURS AGO

Ron Wyden says Republicans trying to find who gutted the IRS are like 'the guy in the hot dog suit, swearing up and down that they're trying to find the guy who did this'

Wyden was referring to the famous Hot Dog Car sketch from the Netflix series "I Think You Should Leave."
CONGRESS & COURTS・1 DAY AGO
Business Insider

GOP Sen. Josh Hawley said his opposition to the aid package was "not isolationism" but "nationalism" in justifying his vote against the aid package.
FOREIGN POLICY・2 DAYS AGO