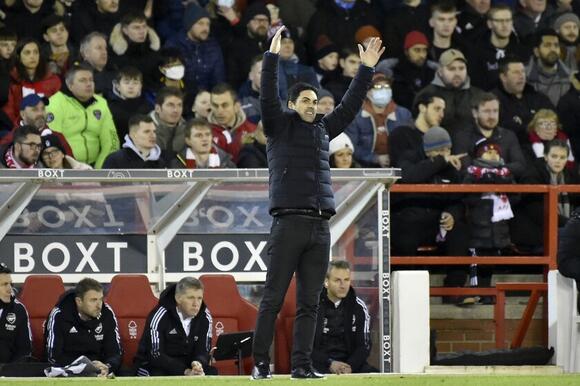 A look at what’s happening in European soccer on Thursday:

Arsenal hosts Liverpool in the second leg of the League Cup semifinals with the teams locked at 0-0 after last week's first leg at Anfield. The winning team will play Chelsea in the final at Wembley Stadium next month. Arsenal manager Mikel Arteta refused to say how many of his players are unavailable for the match, with the London club having had a request to postpone a Premier League derby against Tottenham last weekend granted by the league. Thomas Partey is returning to Arsenal after his Ghana team was eliminated from the African Cup of Nations on Tuesday but he won't be back in time to play. Liverpool remains without star attackers Mohamed Salah and Sadio Mane, who are still at the African Cup.

Real Madrid visits Elche, and Barcelona is at Athletic Bilbao, in games that will conclude the round of 16 of the Copa del Rey. Madrid is coming off triumph in the Spanish Super Cup in Saudi Arabia, where it beat Barcelona in the semifinals and Athletic in the final. Madrid coach Carlo Ancelotti left three regular starters off the squad for Thursday's game — goalkeeper Thibaut Courtois, defender Éder Militão and striker Karim Benzema, the team's leading scorer this season. Forward Gareth Bale will make the trip following a long injury layoff. Barcelona defeated Athletic in last year's Copa final. In the only Spanish league game, Getafe and Granada meet in a match between teams in the bottom half of the standings.

The final quarterfinal spot in the Italian Cup will be decided when Roma hosts second-division Lecce. The winner will face Inter Milan. Lecce is the only team outside Serie A left in the competition. José Mourinho's Roma ended a three-match winless run at the weekend with a narrow 1-0 victory over relegation-threatened Cagliari.

Paris St Germain women's coach Didier Olle-Nicolle has been provisionally suspended following allegations of inappropriate behaviour. 'Paris Saint-Germain was informed today of inappropriate actions and comments to which members of its women's team were allegedly exposed,' a club statement said. 'These facts and remarks, if confirmed, would be incompatible with...
SOCCER・32 MINUTES AGO