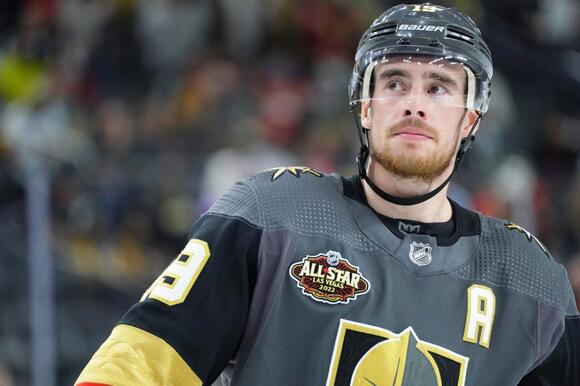 Home hasn’t been very sweet this season for the Vegas Golden Knights, who close out an eight-game homestand on Thursday night against the Montreal Canadiens.

The Golden Knights have won just one of their past six games in Las Vegas (1-3-2) and come in off a 5-3 loss to the Pittsburgh Penguins on Monday night that saw them squander a 3-0 lead.

Vegas, which leads the Pacific Division with 48 points, is just 12-10-2 on home ice. Only Arizona (13) and the expansion Seattle Kraken (12) have more home losses in the Western Conference entering play on Wednesday.

The 10 home losses match the total for the entire season that the Golden Knights had in their storybook expansion season in 2017-18. The joke making the rounds at the time was visiting teams were catching the “Vegas Flu” and perhaps spending a little too much time around the pool or in casinos.

But after allowing five unanswered goals to a Pittsburgh team that was finishing a tough six-game road trip, the Vegas players likely were feeling ill.

“You never want to get waxed in your own building like that,” captain Mark Stone said. “Leading 3-0 after the first period, you can’t walk away from the game with nothing. We’ve got a little soul searching to do.”

Vegas started the home stretch with a 3-1 victory over Anaheim on New Year’s Eve but then followed that up with a 5-4 overtime loss to Winnipeg and a 3-2 loss to Nashville. The Golden Knights answered a 5-1 victory over the New York Rangers with a 2-1 loss to Chicago and a 4-3 shootout loss to Toronto before Monday night’s debacle.

“Every team in the league is going to blow a 3-0 lead at some point during the season,” Vegas coach Peter DeBoer said. “The key is, what do you learn from it?”

DeBoer said the Golden Knights missed injured defensemen Alec Martinez and Nic Hague, especially during physical battles around the net. Martinez has been sidelined since Nov. 11 after taking a skate below the left eye in a 3-2 win over Minnesota and just returned from COVID-19 protocol to practice in a non-contact jersey on Wednesday.

“Hague and Martinez are both defenders, and not to make excuses, because everyone is dealing with guys out of the lineup, but those are two guys that are tough to play around your own net,” DeBoer said. “We miss those guys.”

Montreal, which is an NHL-worst 3-15-4 on the road, would seem to be the right cure for the Golden Knights’ home struggles. The Canadiens, who knocked off the Golden Knights in six games in last season’s Stanley Cup semifinals, have the fewest wins (eight) and points (21) of any team in the NHL.

The Canadiens ended a six-game losing streak with a 5-3 victory at Dallas on Tuesday, just the team’s second win since Nov. 27. It took a career-best 48 saves by goalie Sam Montembeault along with four Stars shots that ricocheted off goal posts to do it.

Christian Dvorak scored two goals and Tyler Toffoli, playing for the first time since Dec. 4 after undergoing hand surgery, added a short-handed goal and an assist.

“(Montembeault) had an amazing game and kept us in it,” Toffoli said. “A couple good breaks with them hitting the post early but we’ll take the win.”

The NHL season officially started back on October 12. In this article, we track all the NHL games today as
NHL・20 HOURS AGO
Sportsnaut

Defenseman Brendan Smith scored a short-handed goal in the second period to fuel the host Carolina Hurricanes to a 2-0
RALEIGH, NC・4 HOURS AGO
Sportsnaut

The St. Louis Blues elevated their play to earn a split following their first two games of their Western Conference
SAINT LOUIS, MO・11 HOURS AGO
Sportsnaut

Nothing gets the people going quite like the Stanley Cup Playoffs. Find out how to live stream every NHL Playoff game here.
NHL・14 HOURS AGO

Bookmark. Save. Favorite. Do your thing. This is the one-stop-shop for everything NBA schedule-related heading into the 2021-22 season: Related:
BROOKLYN, NY・20 HOURS AGO
Sportsnaut

Game 1 hero Jimmy Butler isn’t much for rating his performance or basking in the achievement, even when topping the
MIAMI, FL・2 DAYS AGO
Sportsnaut

Our MLB Games Today schedule is back for the 2022 MLB season. Major League Baseball ended its lockout, officially clearing
NFL・20 HOURS AGO

Philadelphia 76ers general manager Daryl Morey will reportedly be in the hunt for “another star” to team with the organization’s
PHILADELPHIA, PA・1 DAY AGO
Sportsnaut

The St. Louis Cardinals arrive in Pittsburgh on Friday for the start of a series against the Pirates looking to
SAINT LOUIS, MO・1 DAY AGO

Don't want to miss a single game during the NBA Playoff's? Check out these streaming services for all the action.
NBA・14 HOURS AGO
Sportsnaut

Whitecaps in need of GK ahead of match vs. Charlotte FC

Vancouver Whitecaps FC find themselves in desperate need of a goalkeeper after Cody Cropper and Isaac Boehmer were placed in
CHARLOTTE, NC・11 HOURS AGO
Sportsnaut

The Dallas Wings will try to carry the momentum from one of their best offensive performances of the season into
ARLINGTON, TX・9 HOURS AGO
Sportsnaut

Yadier Molina drove in two runs and Adam Wainwright continued his mastery of the Pittsburgh Pirates in the visiting St.
SAINT LOUIS, MO・4 HOURS AGO
Sportsnaut

The Cincinnati Reds activated first baseman Joey Votto off the COVID-19 list prior to Friday’s road game against the Toronto
CINCINNATI, OH・7 HOURS AGO
Sportsnaut

Friday night’s series opener between the Chicago White Sox and Yankees was postponed due to the forecast of sustained inclement
CHICAGO, IL・10 HOURS AGO
Sportsnaut