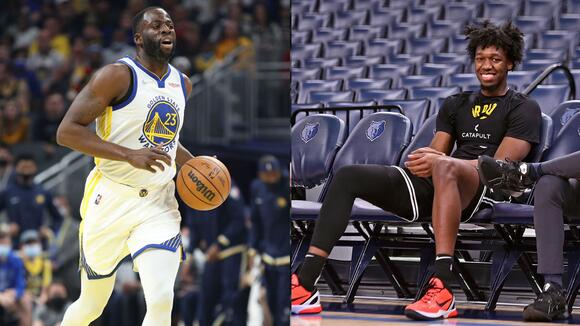 For all of seven seconds, Draymond Green, Klay Thompson and Steph Curry played together on Jan. 9 for the inauguration of Klay Day. Since then, Green has been out with a calf injury that was found to have been associated with a disc in his back . Draymond will be re-evaluated at the end of the current homestand, which concludes with a Jan. 29 matchup against the Brooklyn Nets.

It sounds scary, but Warriors general manager Bob Myers isn't discouraged by Green’s setback. Myers joined 95.7 The Game’s “The Morning Roast: Executive Show” for his bi-weekly appearance Tuesday to discuss Green’s recovery and more. Listen to the full interview below:

“As far as I’m looking at it, each day it’s getting better and that’s the news,” Myers told hosts Bonta Hill and Joe Shasky. “It hasn’t plateaued. I haven’t heard any doomsday scenarios from anybody at this point. They're always out there, but at this juncture, nobody’s saying that. We just gotta let the process go the way it’s going. Talked to some specialists and they say we’re doing the right thing. The key is to not throw a guy back out there that has this issue, and then it makes it worse. We’re just following the best doctors’ orders, listening to his body and listening to [director of sports medicine and performance] Rick [Celebrini].”

The Warriors have gone 3-3 without Green over the past six games. Draymond remains one of the game’s top defenders and is also the leading assist man (7.4 per game) and facilitator on the team.

Golden State was initially hopeful Green would be able to return Tuesday against the Pistons, but the injury complication was announced Sunday. Myers said the it “came on suddenly.”

“He said his concern was strength,” Myers said. “That’s when we thought, maybe this is not a calf tightness thing, because he was lacking some strength. Then we did an MRI and you see the disc. The good news is his strength is coming back. You gotta be careful with these things. You don’t wanna rush it and make it worse.”

Myers also offered an update on second-year center James Wiseman, who has been slowed by December arthroscopic knee surgery . Wiseman hasn’t played in a game since tearing his meniscus last April.

“We’re waiting for him to clear to go contact,” Myers said. “I know we’ve said that before, but he had a procedure done. He had some minor swelling that they were trying to get a handle on. But now he’s close to ramping back up.”

Once Wiseman is cleared for contact, he’ll be able scrimmage and get his conditioning back up to rejoin the Warriors.

“Hopefully we’ll have a little more clarity in the next week or so on what it’s looking like, as far as the timeline,” Myers said. “I want to see the team whole.”

The Warriors used a dominant second-half effort to roll to a 126-117 win over the Dallas Mavericks Friday night at Chase Center to take a 2-0 series lead.
SAN FRANCISCO, CA・1 DAY AGO
95.7 The Game

Kevon Looney gets MVP chants for stellar Game 2 vs. Mavericks

Warriors center Kevon Looney scored a career-high 21 points while grabbing 12 rebounds in Friday night’s 126-117 win over the Mavericks in Game 2 of the Western Conference Finals.
SAN FRANCISCO, CA・1 DAY AGO
95.7 The Game