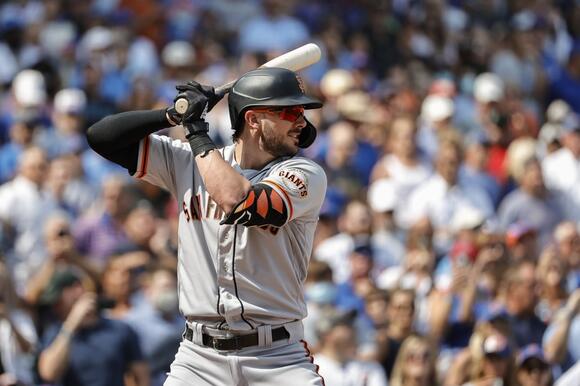 Although there are several remaining free agents on the market that are capable of filling the Yankees’ positional needs at first base, shortstop and in the outfield, general manager Brian Cashman could get creative once the lockout ends.

While third base is currently a log jam on the Yankees’ roster with both Gio Urshela and D.J. LeMahieu slated in the hot corner, and Gleyber Torres shifting back to second base, MLBTR believes New York could sign Bryant, thus moving LeMahieu over to first base and Urshela into a part-time role. The Yankees would also be more inclined to trade Luke Voit if they added Bryant.

Another reason that this scenario might work out is due to Bryant’s versatility, as he plays all three outfield positions as well. If the Yankees are comfortable having Gold Glover Joey Gallo in center field, Bryant has the ability to play either corner spot in the outfield, which would allow Urshela to start at third base.

However, when Cashman re-signed LeMahieu to a six-year, $90 million deal last offseason, he asserted that they did not sign him to be an everyday first baseman. And according to Dan Martin of The New York Post, the Yankees are also reluctant to hand LeMahieu full-time duties at third base. But they are running out of options regarding where to put LeMahieu, considering Torres is projected to play second after committing 18 errors at shortstop a season ago.

The Yankees may have to pick their poison with LeMahieu by playing him in one of their corner infield spots. And, even if they decide that LeMahieu is a better fit at third, Bryant can play right or left field on an everyday basis. Keep in mind, the Yankees are one of the teams that have shown interest in Japanese outfielder Seiya Suzuki, who would likely force Gallo into becoming their everyday center fielder or a prime trade chip instead.

As for Bryant, he would be a major upgrade to the Yankees’ lineup, but would only add to their surplus of right-handed bats. Regardless, he has proven to be one of the game’s best and brightest stars since making his debut in 2015.

While playing for both the Cubs and Giants last season, Bryant was named to the fourth All-Star game of his career, and slugged 25 home runs, drove in 73 RBIs and produced an .835 OPS across 144 games. Bryant also won the 2015 NL Rookie of the Year Award and 2016 NL MVP Award, while helping the Cubs capture their first World Series title in 108 years.

If the Yankees miss out on some of the other options that mesh better with their squad, such as Carlos Correa, Trevor Story, Kyle Schwarber, Anthony Rizzo, Matt Olson or Freddie Freeman, Bryant would be a more than solid fall back plan.

But he won’t come cheap, as he is seeking a five-year, $175 million deal, per MLB Network. So, while Bryant is the type of impact player that is needed in the Bronx, the Yankees might be better off taking a different route in order to upgrade their lineup. If they decide to pursue Bryant, Cashman will have to find a way to make it work due to lack of fit as a result of the current roster construction.

Carlos Beltrán Could Return to Baseball Via Yankees Broadcasts

Follow Pat Ragazzo on Twitter (@ragazzoreport). Be sure to bookmark Inside The Pinstripes and check back daily for news, analysis and more.

The White Sox closer didn't hold back, calling out Josh Donaldson over what he said to Tim Anderson that sparked a benches-clearing situation at Yankee Stadium
NEW YORK CITY, NY・15 HOURS AGO
InsideThePinstripes

Donaldson admitted that he referred to Anderson as Jackie Robinson during Saturday's game, explaining that he meant it as a joke
NEW YORK CITY, NY・1 DAY AGO
InsideThePinstripes

Will the Yankees seek to add depth to their outfield leading up to the deadline later this summer?
NEW YORK CITY, NY・2 DAYS AGO

García's numbers in Triple-A to start the 2022 season are putrid across the board, a discouraging sign for a pitcher that was once a top prospect in New York's farm system
NEW YORK CITY, NY・1 DAY AGO
InsideThePinstripes

One day after he was called "Jackie" by Josh Donaldson, Tim Anderson quieted a raucous crowd of Yankees fans with a big three-run home run
NEW YORK CITY, NY・9 HOURS AGO
InsideThePinstripes

It's possible that Green has thrown his last pitch in a Yankees uniform
NEW YORK CITY, NY・18 HOURS AGO
InsideThePinstripes

While Hicks hasn't been able to get going at the plate all season, his numbers with runners in scoring position are even more of a concern
NEW YORK CITY, NY・2 DAYS AGO