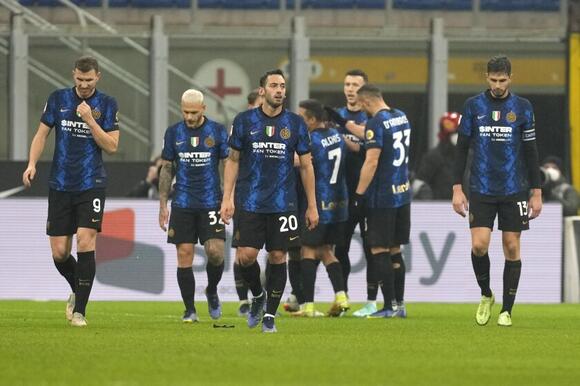 Inter Milan survived a scare as it beat Empoli 3-2 after extra time on Wednesday to reach the Italian Cup quarterfinals.

It appeared as if Empoli was about to pull off an upset in the round of 16 when it went ahead with Nedim Bajrami's strike and an own-goal by home 'keeper Ionuț Radu after Alexis Sánchez’s opener for Inter.

But Andrea Ranocchia leveled in stoppage time to send the match into extra time, where Stefano Sensi scored the winner. Inter will next play either Roma or Lecce — the only team outside Serie A left in the competition.

Inter, which leads Serie A, had rotated its squad to give several players a rest. But coach Simone Inzaghi was forced into an early change when Joaquín Correa limped off in tears with a suspected hamstring problem and was replaced by Sánchez in the fifth minute.

Sánchez had come off the bench to score a last-minute winner against Juventus in the Italian Super Cup last week. And he headed in a cross from Denzel Dumfries in the 13th minute.

Inter had chances to double its lead but Empoli began to get into the match and scored a deserved equalizer when Kristjan Asllani cut the ball back from the byline for Bajrami to control and fire into the bottom right corner.

And the turnaround was complete when a towering header from former AC Milan forward Patrick Cutrone bounced off the underside of the bar and in off the back of Radu’s leg.

Just as it appeared as though Empoli was about to pull off a shock result at San Siro, Ranocchia levelled with an acrobatic volley from 12 yards.

Sánchez thought he had scored the winner with almost the last kick of the match — as he had done against Juventus — but it was ruled out for offside.

The former Manchester United forward did have a hand in the goal in the 14th minute of extra time. Following a mistake by the Empoli defence, Sánchez set up Sensi — who had only just come on as a substitute.

Sassuolo reached the quarterfinals for the first time in its history with a 1-0 win over Cagliari.

It next faces holder Juventus.

Abdou Harroui scored the only goal of the game in the 18th minute. It was his first goal in Italian soccer after arriving from Sparta Rotterdam in August.

Cagliari had two goals ruled out for offside.

A group fighting homophobia in soccer has called on the French league and Paris Saint-Germain to ask player Idrissa Gueye for an explanation after he missed a game last week amid reports that he refused to play because he did not want to wear a rainbow-colored number on the back of his jersey
SAN DIEGO, CA・3 HOURS AGO
San Diego Union-Tribune

Slonina, viewed as US future keeper, listed on Poland roster

In defense and attack, veteran Tavernier key for Rangers

It is thanks to one of its fullbacks that Rangers arrives at the Europa League final with the competition's best attack and in good position to end a 50-year drought without a European title
SAN DIEGO, CA・1 HOUR AGO
Daily Mail

Lionel Messi's agent denies claims that the PSG superstar has already agreed to sign for Inter Miami when his contract expires in 2023... amid reports the Argentine would acquire 35% of David Beckham's franchise after joining

Lionel Messi's father and agent has denied claims that he has agreed to join Inter Miami and acquire a 35 per cent stake in David Beckham's franchise when his PSG contract expires next year. Messi put pen to paper on a two-year deal with PSG last summer after waving an...
MLS・14 MINUTES AGO